The complex system of subterranean passages at Montesquieu-Avantès in the foothills of the central French Pyrenees through which the River Volp flows is conventionally divided into three caves, Le Tuc d'Audoubert to the west, Les Trois-Frères in the centre and Enlène to the east.

While the eastern two are connected by a narrow corridor, no usable passage connects Tuc d'Audoubert with Trois-Frères and the only current means of access is by boat. At Tuc d'Audoubert the galleries lie on three levels, the lowest carrying the River Volp, the 'median' with decorated galleries (La Salle Nuptiale, La Galerie des Gravures) and the upper with further decoration (La Chatière, Salle des Talons) terminating in the Salle des Bisons containing the celebrated modelled clay bison.

The position of Trois-Frères and Enlène approximates to the upper level of Tuc d'Audoubert. Trois-Frères has numerous galleries with several possible original entrances, although the only certain Magdalenian access was through Enlène. Whereas Trois-Frères contains one of the most prolific arrays of wall art (Galerie des Mains, Chapelle de la Lionne, Galerie des Points, Salle du Grand-Eboulis, Sanctuaire, Galerie des Chouettes, Galerie de l'Hémione), Enlène has none. However excavations at Enlène have revealed a considerable range of engraved bones and stone plaquettes from occupation deposits.

La Grotte d'Enlène is the longest Volp cave, and was the subject of numerous excavations during the second half of the nineteenth century until the Second World War. However, it has long been ignored because the main findings of movable art that were made have always been attributed to the Trois Frères, with which it communicates by a narrow passage.

However, one of the major interests of Enlène is that it is a cave-habitat with a high occupancy rate during the Magdalenian IV, while Les Trois-Frères was a cave-shrine and has never been used as a habitat, at least in the long term and delivered little movable art remains. The transition between the two caves was used extensively by the Magdalenians, and a comparison can legitimately be considered between the movable art of Enlène and the wall art of Les Trois-Frères.

Text above translated and adapted from Giraud et al. (1982)

Plan of the cave system. 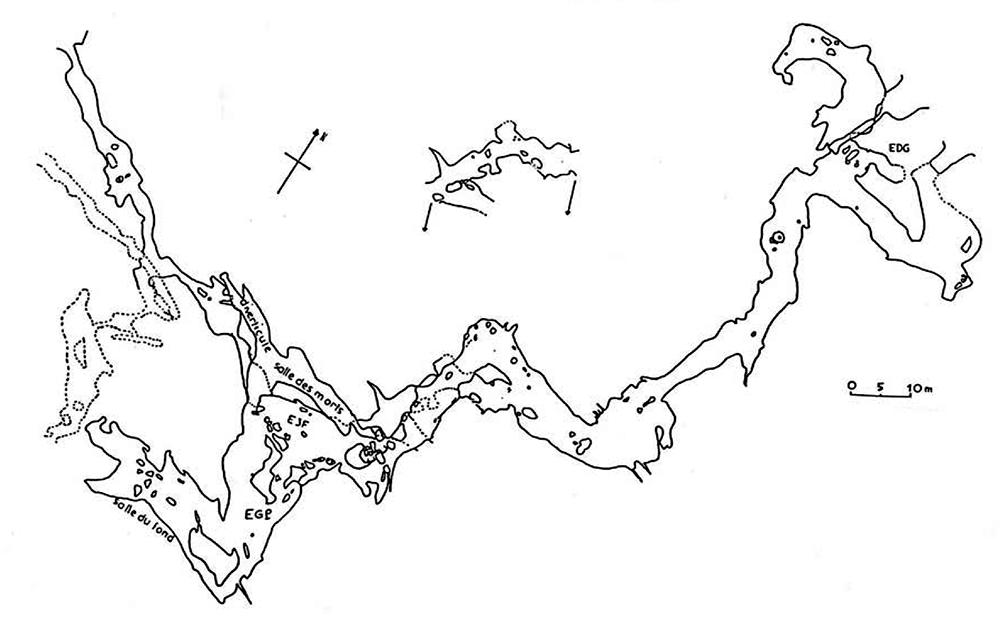 Plan of the Enlène cave system.

The entry is to the upper right. The passage which joins Enlène and Les Trois-Frères is right at the top, on the left of the plan. 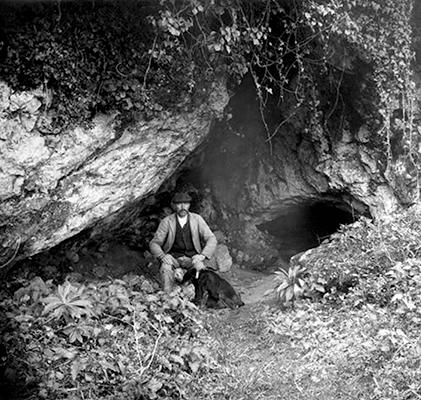 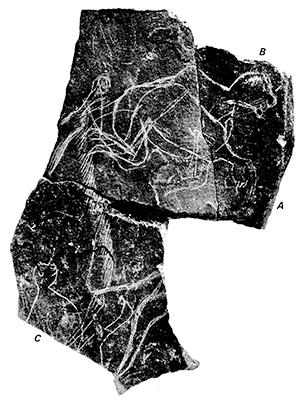 Grotte d'Enlène, engraved sandstone plaquette. The central part was discovered by Louis Bégouën, with the two other fragments being found in 1980. Now in the Musée de l'homme.

Louis Bégouën thought that this piece, of all those he had discovered 'the most curious of all' and gave a number of reasons: made of fissile sandstone, one edge on one side appeared to have been hammered on six centimetres of its length, the piece had human figures engraved on it, and he remarked on the extraordinary visibility of the engraving, which appeared as a dark reddish brown on the stone. He felt it prudent to say that the published photograph had not been retouched. Bégouën (1939)

In his publication, Bégouën rightly distinguished the representation of the forequarters of a bison, on which were superimposed two human bodies in profile and turned to the right. He interpreted one of these as a large body of a woman with protruding belly and legs folded, and another body, perhaps masculine, thinner, appearing within the body of the woman, with the right leg bent and the left leg straight . The arms belong to the slim body. The left hand seems to hold an object. Above the elbow, lines could be rings. The character of the thin body is crossed by two parallel lines which can be seen to be a belt. 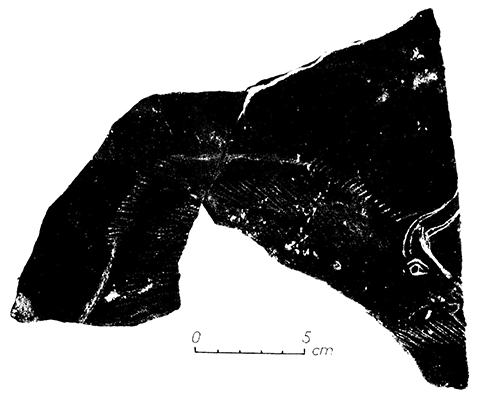 Newly discovered fragments of the engraved sandstone plaquette from Enlène. The small triangular fragment in the centre was found by Louis Bégouën in the 1930s. 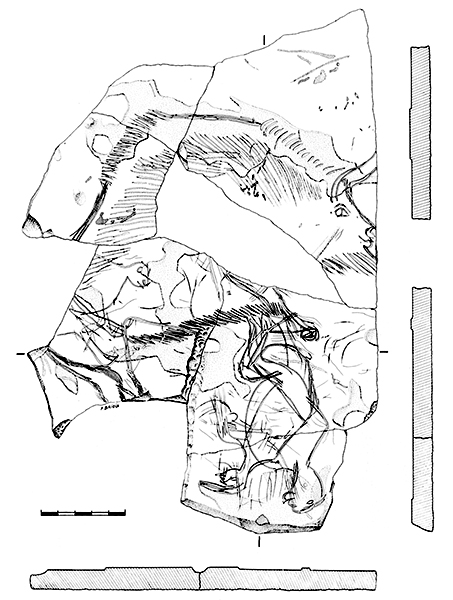 The engraved plaquette from Enlène in its present state, with the newly discovered sections added.

Plan of the Salle du Fond de la Caverne d'Enlène, at Montesquieu-Avantés (Ariège), with the distribution of the fragments of the large engraved plaquette. 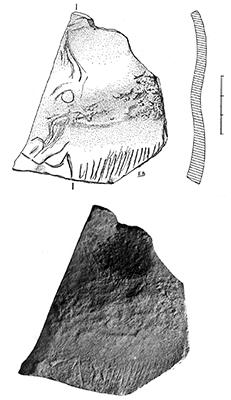 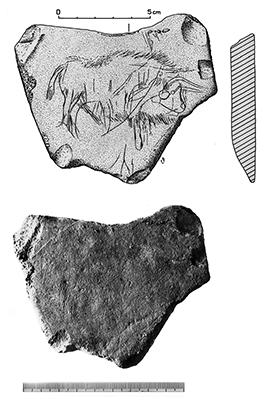 Map of sites in the south of France, including Les Trois-Frères, with Grotte d'Enlène at the same location, showing ice age coastlines.

These discs are particularly well represented in the Middle Magdalenian of Enlène, where we know by now four complete specimens and more than eighty fragments. Most, 80%, were found in the End Chamber, as this one was. The face with the bison was face down in the sediments.

It is nearly flat and very thin, thickness 0.34 cm, cut as they all are from a shoulder blade. It is not completely round, and its dimensions are 5.36 cm x 5.50 cm. It is on the large side, as most are about 4 cm in diameter. It was found broken into three pieces, still connected at the time of discovery. 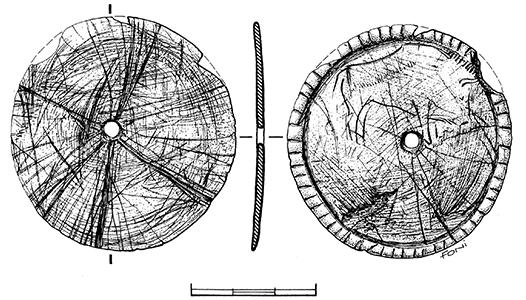 There are three small slivers missing from the edges, and there has been limited chipping along the main fracture. The engraved surface has many superficial defects of the bone, with the spongosia visible in parts, the other side being less affected. It was covered with red ochre after engraving, because it has retained a reddish tinge, especially in the grooves of the lines immediately in front of the tail.

This painting was analysed and showed the presence of a complex mixture of haematite and crushed feldspar, as a result of careful preparation of the red 'paint' used. The painting was therefore an integral part of the artwork and the ochre colour was not the result of a technical process, such as polishing bone for example.

There are many examples of discs or rondelles with central holes from various (mostly Magdalenian) sites in Europe. Various theories have been put forward as to their use, including clothing decoration and large buttons. As my colleague AnnDee first pointed out, their most likely use is as the weight (normally called a whorl) for a drop spindle, in the spinning of fibres into yarn. This is borne out by the fact that the overwhelming majority have a central hole, all of similar dimensions, 2 to 4 mm, and by the fact that many are not decorated in any meaningful or artistic way, and are also made of other materials (sandstone, slate) as well as bone. 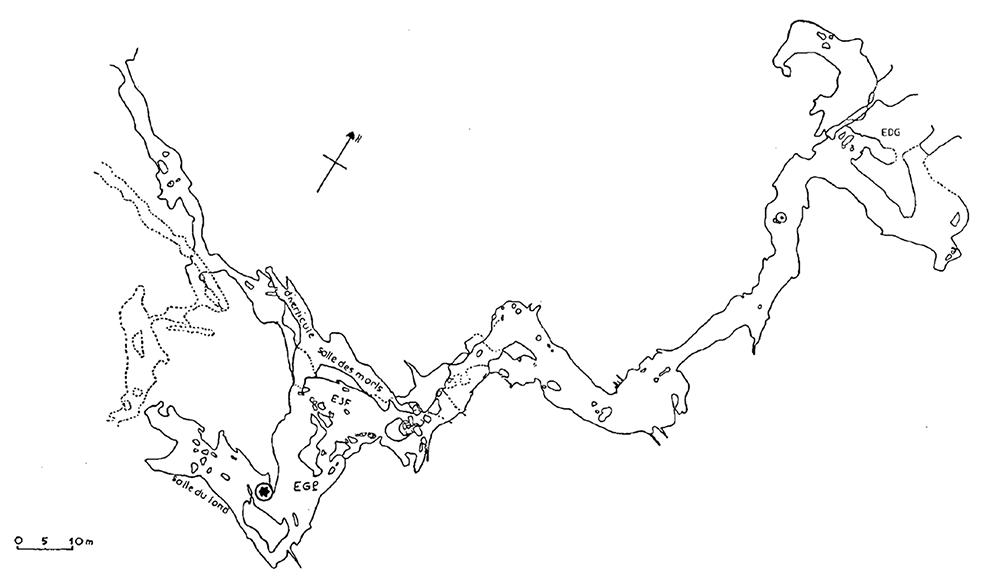 Plan of the Caverne d'Enléne, showing the position of the rondelle au bison.


Most of the Enlène disks are reduced to of fragments, but their number is sufficient to find that the main types known from elsewhere are included: - undecorated; - Decorated with rays; - Decorated with various geometric patterns; - Fitted with peripheral hatched circle, etc.

There is, however, a particular type that has until now has never attracted attention because of its uniqueness and rarity. Some rings are perforated not only the centre but also along the edge. The only certain exemplary published is that of Mas d'Azil. In the same gallery, the pieces of at least three others were reported.

Many similarities (tools, jewellery, etc.) between the Flint Gallery of Mas d'Azil and Enlène, lead to the point that it is legitimate to ask whether they might be two habitats of the same group of people, separated by barely twenty kilometres. Regarding the perforated disks, we find, point by point, the same characteristics, the perforations peripheral perforations being the most convincing.

But many other details are common, both as regards the methods of production as well as the decoration. Also, at Enlène as at the Mas d'Azil and at Saint-Michel-d'Arudy and at Isturitz reindeer scapulas were found from which had been extracted disks, proving that they were made on site. 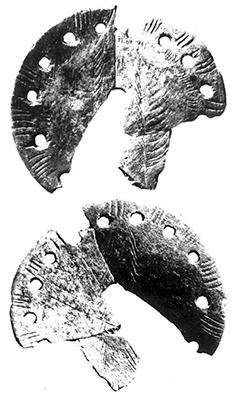 This example from Enlène has holes around the circumference of the disk, a most unusual decoration. 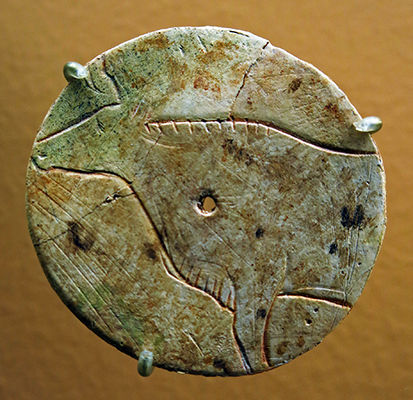 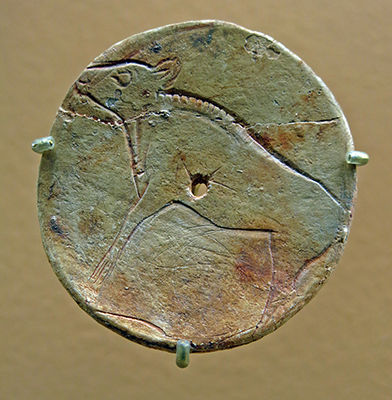 Engraving of an aurochs and a bison from Mas d'Azil.

This may have been used as a button, the two sides are quite different. The one on the left depicts an adult aurochs considered a female because of the fine features of the head. The withers and chest are marked with small incisions. Horns and ears are sketched. The eye and the nostril are shown as points.

The other side of the disk shows a young bison, which, according to the size of the horn and the curvature of the hump might be about five months old. This young bison is half the size of the adult animal. Again, we find the same incisions along the shoulder and the chest. Aurochs females sometimes adopted baby bison.(I assume similar behaviour between cattle and bison has been recorded in zoos - Don ) 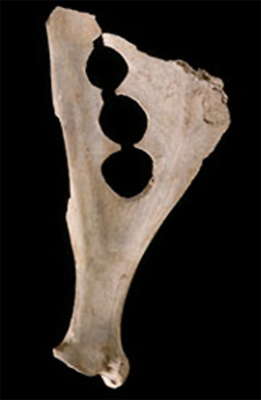 This scapula from Mas d'Azil was used as the base material for round disks similar to the ones above.

It would seem not much care was taking in making the buttons completely round at the roughing out stage. 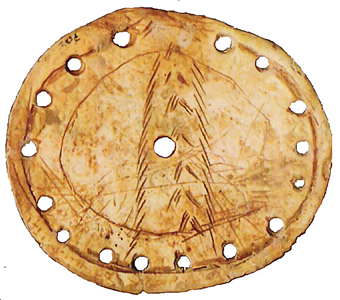 Multi perforated engraved disc from the Magdalenian discovered by Péquart.

This disc cut from an omoplate or shoulder blade, has sixteen holes evenly spaced around the circumference with an extra one in the centre.

On each side of the disc, an engraved line connects the perforations. The disc is decorated with two bands of engraved hatching along the diameter of both sides of the central hole. Six pairs of convergent dashes in a chevron shape are within the bands of hatching.

This type of geometric pattern associated with multiple perforations can be found on several other pieces of discs found at the site. 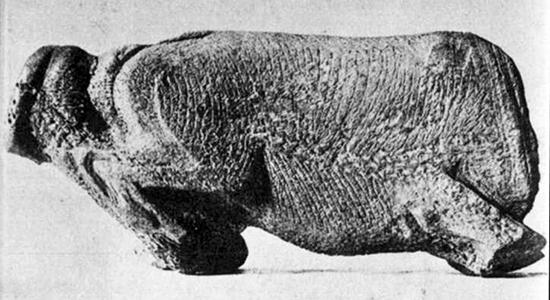 Fragment in reindeer antler of a spear thrower in the shape of a deer. It would appear that the legs of the deer form the hook for the propulseur.

From the excavations of la Grotte d'Enlène by Comte Henri Bégouën. 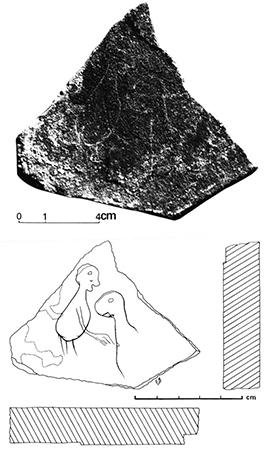 Plaquette with two humans on sandstone, No. 292. 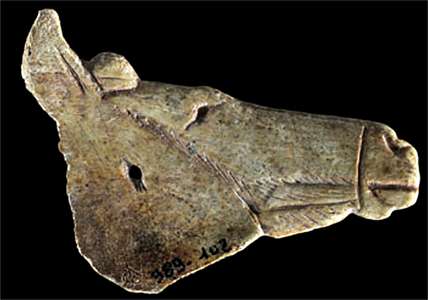 This horse's head comes from the Grotte d'Enlène. It would seem that the fashion for this sort of artefact was widespread across the Pyrenees. It is very similar to the ones from Isturitz. 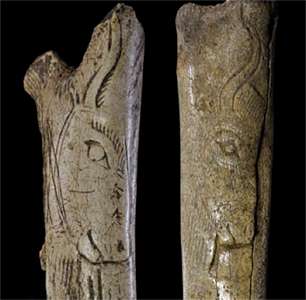 Almost certainly from the same artist, this demonstrates, just like the multiple copies of propulseurs (spear throwers, atlatls) with a fawn and birds, that trade was normal in this society. 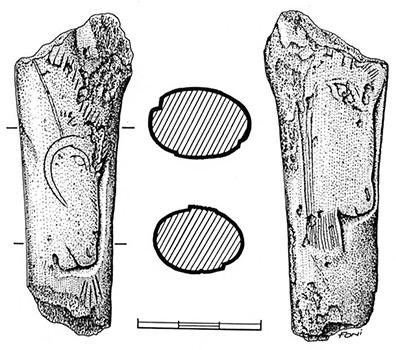 Head of Musk Ox to the left, and head of a probable Bison to the right, on the same fragment of Reindeer antler, discovered in the Caverne d'Enlène. 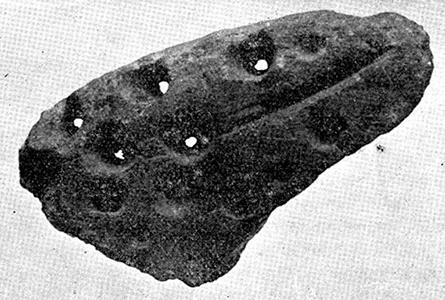 This is a piece of sandstone from Enlène, looking vaguely like a croissant and measuring 7.5 cm long, 4 cm in its greatest width and 2 cm thick. Its different surfaces are covered with very small deep cupules, most of them by joined at the tip, piercing the object from side to side, perfectly oblique at the edges and giving it the look of rocks perforated by burrowing molluscs.

A groove or rainure about 2.5 cm long exists on one side and is similar to those found on small sandstone polishers. This small instrument would indeed serve to sharpen the tips of bone. By giving them a rotational movement, in one action the ends were rounded and made more pointed.

As it was not found in place, it is impossible to use the stratigraphy of the site for dating. We have, in fact, picked it up several years ago in the spoil from excavations formerly carried out by Felix Regnault, Abbé Can Ourban and others in the bottom of the cave. 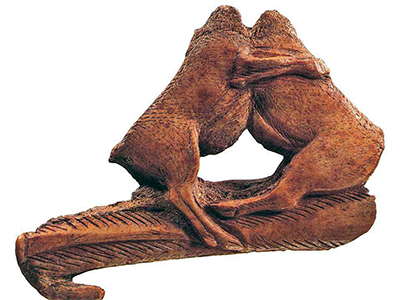 Propulseur in the shape of two headless bison from Grotte d'Enlène. 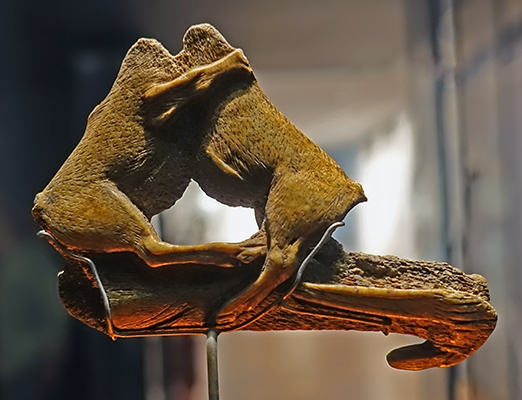 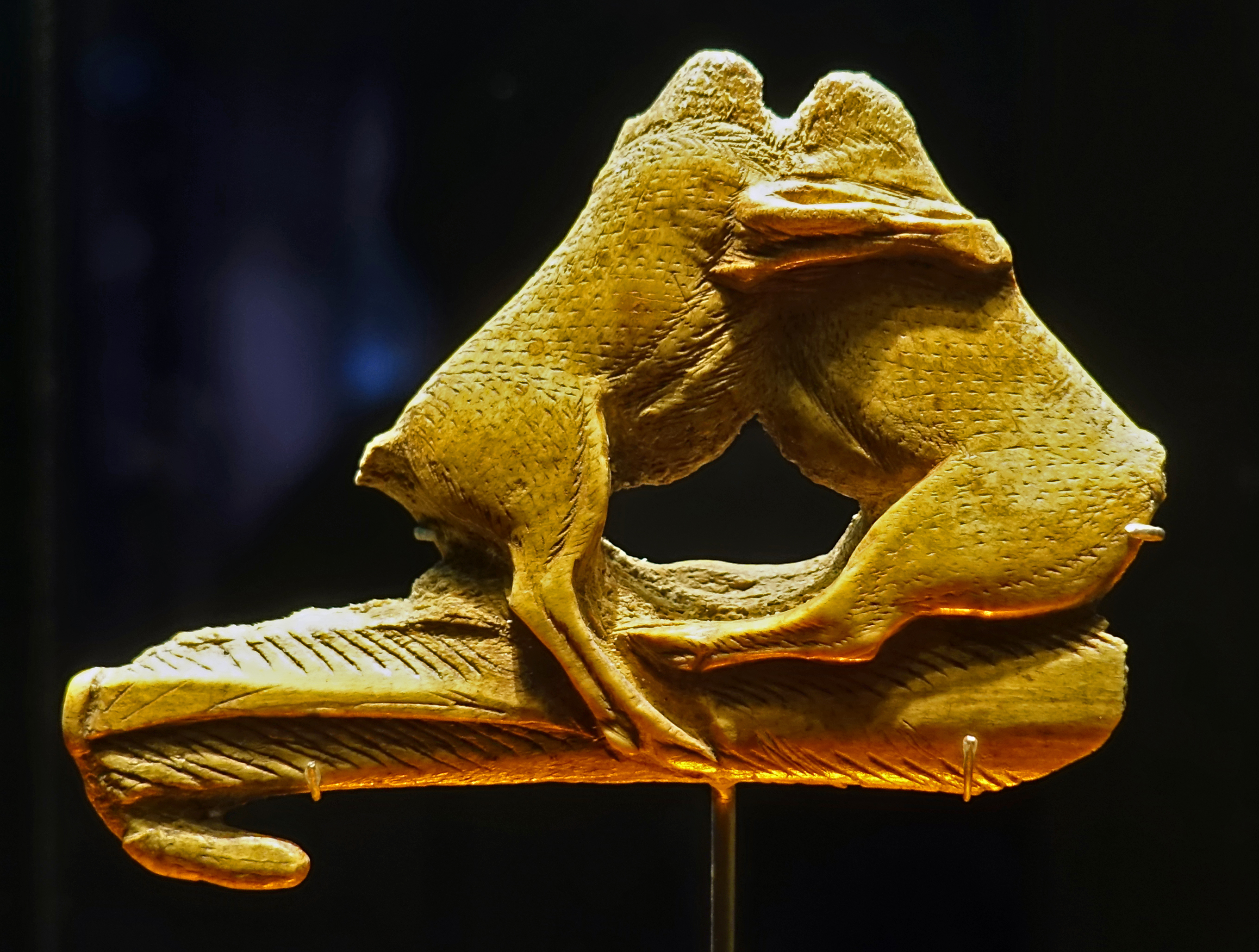 Propulseur in the shape of two headless bison from Grotte d'Enlène.

This end shot shows that the sculpture of the two bison from Grotte d'Enlène is of bone, since we can see the honeycomb structure of diploë (spongy bone). 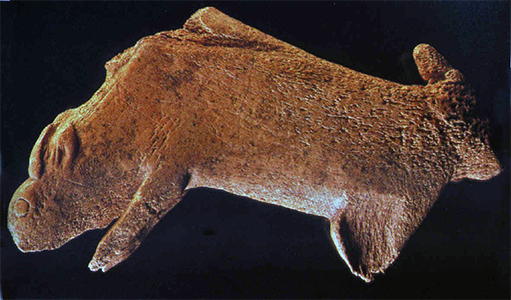 Propulseur in the shape of a Saiga antelope from Grotte d'Enlène.

Spear straightener decorated with a salmon from Grotte d'Enlène.

The layers in which this object was found have been dated to 13 000 BP.