The Makapansgat pebble, or the pebble of many faces, is a 260-gram jasperite cobble with natural chipping and wear patterns that make it look like a crude rendition of a human face. The pebble is interesting in that it was found some distance from any possible natural source, in the context of Australopithecus africanus remains in South Africa. Though it is definitely not a manufactured object, it has been suggested that some australopithecine, or possibly another hominid, might have recognised it as a symbolic face, in possibly the earliest example of symbolic thinking or aesthetic sense in the human heritage, and brought the pebble back to camp, which would make it a candidate for the oldest known manuport at between 2.5 and 2.9 million years ago. The teacher Wilfred I. Eizman found it in the Makapansgat, a dolerite cave in the Makapan Valley north of Mokopane, Limpopo, South Africa in 1925. Almost 50 years later, Raymond Dart was the first to describe it in 1974. 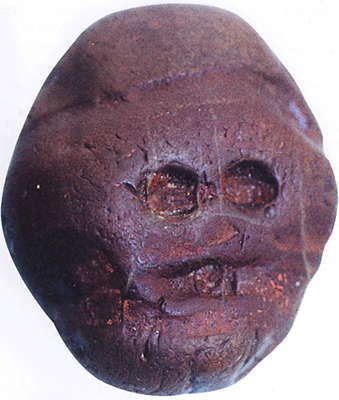 In 1925, explorers of a cave at Makapansgat in South Africa discovered bones of Australopithecus, a predecessor of modern humans who lived there some three million years ago. Associated with the bones was a waterworn reddish brown jasperite pebble, shown here, that bears an uncanny resemblance to a human face. 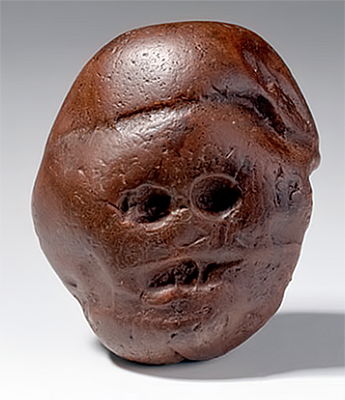 The nearest known source of this variety of stone is 20 miles away from the cave. One of the early humans who took refuge in the rock shelter at Makapansgat must have noticed the pebble in a stream bed and, awestruck by the 'face' on the stone, brought it back for safekeeping. 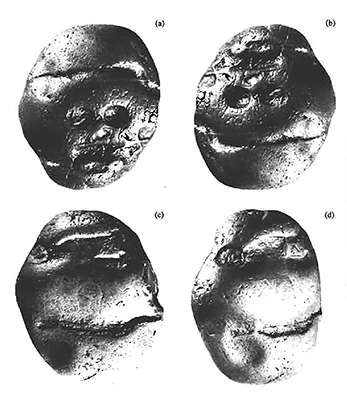 The Makapansgat pebble in different aspects.

a) the 'front' or 'obverse' orientated to indicate the original 'face' as first seen by Eitzman. Note the incongruously expanded forehead's seductive appeal to modern humans.
b) the conceptual transformation provided by rotating the same aspect through 180°. The 'eyes' are unchanged, but now set into a wide face with a massive lower 'jaw' and broadly laughing 'mouth', while the congruous 'skull cap' is reduced and flat.
c) the 'rear' or 'reverse' to show the semblance of a battered oldster with sunken, toothless jaws, mutilated by a gash of his left 'eye', but retaining a viable right eye.
d) another view of the same aspect to indicate the subtlety with which individual features such as 'eyebrows', 'eyes', 'nose', and 'mouth' alter and engage attention with trivial alterations in illumination and inclination of the pebble. 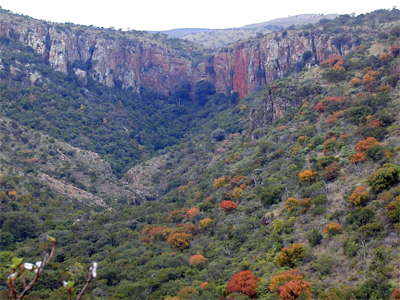 The beautiful Makapan's Valley where the cavern is located. 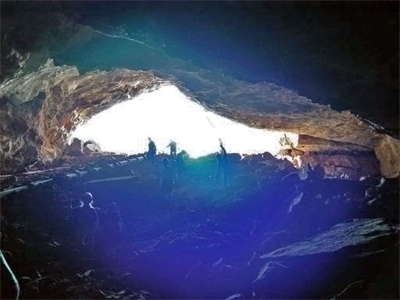 The entrance to the huge cave where two thousand or more people may shelter.

There is a fascinating story behind the place where the pebble was found. This excellent blog details what happened in the area in relatively recent times:

Every time I visit my son in Mokopane (Potgietersrus), I travel past the dead stump of an old camel thorn tree and a small monument. This site is about 40 kilometres North of Mookgophong (Naboomspruit), situated just where the water of the Nylsvlei floodplain drains off into the Mokgalakwena River on its way to the Limpopo River much further North.

Only once have I actually stopped to look at the monument but every time I pass it, my thoughts wander to the events that started here over one and a half centuries ago.

In 1854, Hermanus Potgieter, one of the Voortrekker leaders, and his people made their laager (camp) here on the banks of the river. They had left the Cape Colony, more than a thousand kilometres to the South, when they could no longer tolerate the oppression of British rule and the violence of being forced to share land with the warring Xhosa people with whom they had nothing in common. After a year of trekking over arid land, grassy plains, many rivers and through the bush, they stopped here, maybe hoping that they have found a place to put down their roots in this beautiful and fertile land at the foot of the Waterberg Mountains.

On the other hand, Makapan, the Ndebele chief of the area, saw these strangers invading his domain and decided that they must be driven away. Makapan and his warriors attacked the laager of Hermanus and his people, as well as two other laagers nearby, and killed every man, woman and child. History has it that the babies and small children in the laager were killed by dashing their heads against the camel thorn trees and that Hermanus Potgieter himself was flayed alive. Twenty Eight trekkers were killed and the site became known as Moorddrift (Murder Ford).

Other Voortrekkers on their way North came upon the carnage left by Makapan and his men. After burying their fellow trekkers, they banded together and rode against Makapan to avenge the killings. Makapan and his followers fled before them up a valley to the Northeast of what is today Mokopane, and took refuge in a gigantic cavern to escape the wrath of the avengers. This cavern was fronted by a rocky precipice and there was no way that the trekkers could get to Makapan and his people.

The trekkers then blockaded the entrance to the cavern over a period of 29 days and by the time they stormed the cavern, very few warriors were strong enough to resist the avenging trekkers. It is estimated that more than two thousand of Makapan's people died in that cavern from hunger and thirst. The skeletons and bones remained in the cave for many years and it is told that the local witchdoctors made good use of this easy source of human bones to brew strong muti (medicine)! Eventually the skeletons and bones were removed and the cavern was officially named Historic Cave, but it is still spoken of by its popular name, Makapansgat (Makapan's Cave). Some of the skulls even ended up in the Royal College of Surgeons' Museum in London.

The Moordrif monument is accessible to anybody who cares to stop along the road and visit it, but Makapansgat is not open to casual visitors and for a very good reason. In 1936 it was proclaimed a national monument, not only because of Makapan and the trekkers, but mostly because of its importance as an archaeological and paleontological site. Evidence has been found that this cave, and others in Makapan's Valley, had been inhabited for over three million years; that is from Ape-Man to Iron Age Man to Modern Man. Many skulls, fossils and artefacts of both human, animal and plant origin have been found and retrieved, and many more remain, waiting to be retrieved and investigated.