The Venus of Macomer

Much of the material for this page came from Mussi (2009)

In 1949, Francesco Marras, a carpenter of Macomer, in western Sardinia, started digging out with a friend the deposit of a small cave in his orchard, discovering prehistoric implements. He eventually assembled a large archaeological collection, without any recorded stratigraphic provenence, from the cave itself and from the area at the entrance. Most of it comprised lithic implements and potsherds, but a female figurine was also unearthed, now known as the Venus of Macomer. 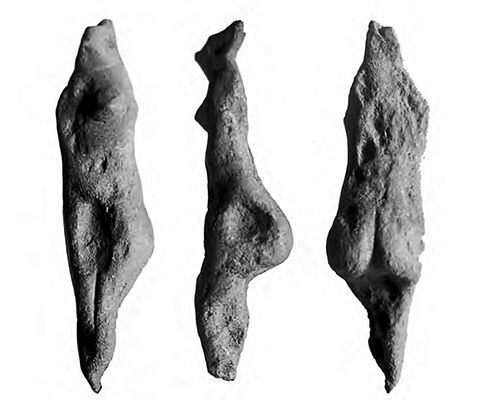 The Venus of Macomer, after pictures in the archives of Museo Archeologico Nazionale in Cagliari.

Note that the figurine is nearly complete in frontal and dorsal view, but that the distal end is broken off in the left lateral view.

The raw material for this venus figurine is volcanic rock, basalt or andesite, and the dimensions are:
Length 134 mm, width at the buttocks 35 mm, thickness at the left buttock 31 mm, weight 95 gm.

Macomer stands in a commanding position at 550 metres above sea level, on the edge of a dissected basalt plateau. North of the town, the elevation rises rapidly to over 800 m, while south of it the escarpment plunges by some 100 m towards a wide tectonic depression, the graben of Ottana.

Macomer itself is further delimited, to the North and East, by the deeply encased valley of Rio s’Adde. The cave of the figurine reportedly was at the eastern edge of the town, where the Via Aspromonte ends, facing the incision of Rio s’Adde – hence the name of Riparo s’Adde.

The cave – actually, a rockshelter with a low ceiling – opens in an orchard, and much of the original entrance appears to have been artificially modified. It is now encased within a dry stone wall, made with huge rocks, apparently built to consolidate the collapsing roof, as the basalt is heavily fissured. Stone walls also partition the rockshelter itself into smaller rooms, each with a distinct opening.

The cave continues outside the property which once belonged to F. Marras. The original depth could well have been in the range of 2 m, while the width of the entrance, which can only be guessed, might have been 5 m or more. Only a fraction of the surface was actually excavated at the time of the discovery. Lilliu (1950) reports that ca. 1.6m of deposit was dug. According to Pesce (1949), the statuette 'fu trovata non nell'ammasso degli altri manufatti, ma imprigionata in una masso di breccia ossifera, formatosi per deposito all'interno della grotta'. That is, 'it was discovered not in the same accumulation as the remaining implements, but within an ossiferous breccia, which had formed and deposited inside the cave'. Remnants of the hypothetical breccia are not currently to be seen anywhere on the figurine. 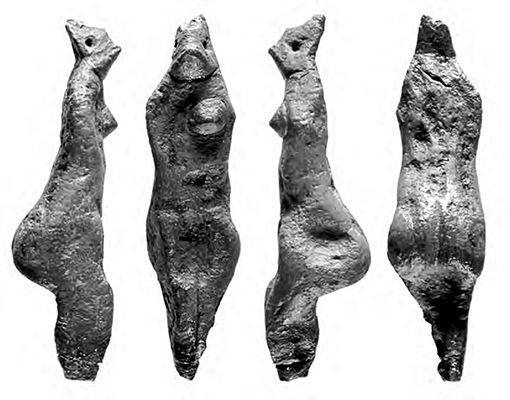 The Venus of Macomer, after recent pictures of the Museo Archeologico Nazionale in Cagliari.

Note the diagonal fracture across the upper back, and the fixed fracture at the distal end.

Venus of Macomer: a detailed view of the head, after recent pictures of the Museo Archeologico Nazionale in Cagliar 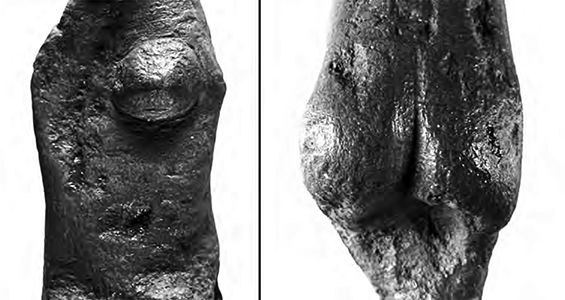 Venus of Macomer: A detailed view of the thorax and buttocks, after recent pictures of the Museo Archeologico Nazionale in Cagliari