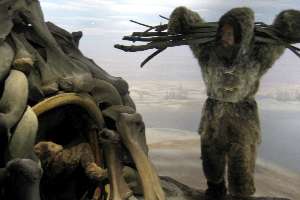 Diorama of a bone hut at Mezhirich

Photo: Wally Gobetz, from a diorama display at the American Museum of Natural History, online at http://archaeology.about.com 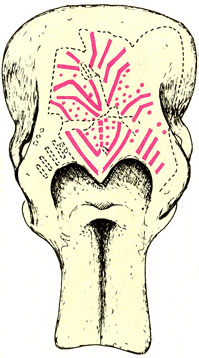 Painting in red on the front of mammoth skull found at the entrance to one of the huts at the mammoth hunter's settlement at Mezhirich. It is thought that the red design may represent the flames and sparks of a fire.


At Mezhirich in 1965, a farmer dug up the lower jawbone of a mammoth while in the process of expanding his cellar. Further excavations revealed the presence of four huts, made up of a total of 149 mammoth bones. These dwellings, dating back some 15,000 years, were determined to have been some of the oldest shelters known to have been constructed by pre-historic man. Mezhirich or Mezhyrich or Межиріч, is a village in central Ukraine near the point where the Rosava River flows into the Ros.

(text above adapted from Wikipedia)

The early prehistorians of the last century were understandably concerned with establishing the order and sequence of their materials, since no means of exact dating existed to help them. They often sank narrow pits down through the deposit with the sole object of establishing which tools came from which layer, thereby forming a picture of technical changes from one age to the next. These studies are still important but leave unanswered many questions about the kind of society to which the toolmakers belonged. Much broader information is obtained today, not just by digging downward, but by digging outward, or horizontally, at the same time. If the conditions of preservation are favorable, the archaeologist traces and follows the original floor on which the prehistoric inhabitants walked, hoping to expose the remains of hearths and wooden structures. Each layer is successively peeled off over as wide an area as possible. The patterns of flint and bone debris scattered across each floor can give important clues to the particular types of activities that were once carried on there.

The change from narrow pits to broad exposures was an innovation not of the French but of the Russians. In the early years of this century, Russian archaeologists first began encountering thick concentrations of animal bones on the terraces of such great Ukrainian rivers as the Dniester and the Don. Pits sunk here and there could make no sense of the dense bone heaps, but as soon as the remains were opened up horizontally over a broad area, the picture came clear. The bones once formed the foundations and frameworks.of houses built when wood was scarce and the shelter of caves unavailable. Since the late 1920s, such bone houses have been found in considerable numbers, often clustered together in little "villages" of four or five houses in the fertile valleys of the Ukraine- The same method of construction has appeared as far west as Kracow, in Poland, where recent excavations in the city centre revealed three rings of mammoth bones exactly similar to those in Mezhirich and Mezin and dating to about 20 000 years ago.

Some of these bone buildings were remarkable structures in their time. One of the most intricate was discovered in 1965 at a place called Mezherich, near Kiev in the Ukraine. A farmer, digging his cellar, almost two meters below ground level, struck the massive lower jaw of a mammoth with his spade. The jawbone was upside down, and had been inserted into the bottom of another jaw like a child's building brick. In fact, as subsequent excavation showed, a complete ring of these inverted interlocking jaws formed the solid base of a roughly circular hut four or five meters across. About three dozen huge, curving mammoth tusks had been used as arching supports for the roof and for the porch, some of them still left in their sockets in the skulls. Separate lengths of tusks were even linked in laces by a hollow sleeve of ivory that fitted over the join. It has been estimated that the total of bones incorporated in the structure must have belonged to a minimum of ninety-five mammoths. This need ,not be a measure of some prodigious hunting feat, since gnawing marks of carnivores suggest that many of them were scavenged. However, the task of dragging the enormous skulls across country should not be underestimated since a-small one weighed about one hundred kilograms. It is likely that this extremely solid framework, when completed, was covered with hides just like the skin and whalebone huts built by Siberian coastal hunters during the nineteenth century.

Inside the Mezherich building, there were some remarkable finds: amber ornaments and fossil shells, transported an estimated 350 to 500 kilometres from their source, and the remains of one of the earliest percussion instruments ever found. The "drum" consisted of a mammoth skull set at the entrance porch and painted with a pattern of red ocher dots and lines. The top of this skull bears depressions where it seems to have been beaten by "drumsticks," the animal long bones that were found to bear corresponding damage on their ends. It is possible that the building may have served some ritual or communal function at which the mammoth bone rhythms were beaten out, although many Ukrainian huts of a similar size seem to have been ordinary living places.

In the far west, there was simply no need for such solid structures because shelter was provided by limestone overhangs and cave mouths. Nevertheless, the same principles of excavation pioneered in Russia have revealed traces of "interior design" at a number of cave sites, such as the remains of wooden partitions and lean-to structures that would have helped to exclude cold and damp. In addition, temporary open-air camps are being discovered in increasing numbers in western Europe. Several of these appear to be summertime halts occupied by small groups of hunters who may have joined up with larger groups to live in the shelter of caves during the winter. At the most thoroughly investigated of all these camps, situated at Pincevent in the Seine valley, a meticulous attention to detail allowed the excavator to reconstruct the outlines of three light skin tents occupied by a small summer band of reindeer hunters. Although no wooden or bone foundations had survived, the shape of the structures was revealed partly by the pattern of flint flakes struck off by toolmakers inside the tents. The paths traced by some of the flakes had clearly been interrupted by the hide walls.

Text above: 'Secrets of the Ice Age' by E. Hadingham

View towards the site and the Ros and Rosava floodplain. Arrow indicates site location

Location: 49 deg 38' N, 31 deg 24'E
Located on a North facing promontory overlooking the valleys of the Ros and Rosava Rivers at their junction.

Discovered (1965) as with many other similar sites in the Ukraine when a farmer began excavating a cellar a short distance from his front door. Excavated originally by I.G. Pidoplichko. Recent research (Sarah Mason at: http://www.ucl.ac.uk/archaeology/research/profiles/smason/smmezher.htm) indicates that there is a significant quantity of wood charcoal at the Mezhirich site, which is surprising when you consider that most researchers have assumed that the area was essentially treeless. The wood charcoal could perhaps have come from small woody shrubs.

S. Mason has also found tap root material from the compositae family, which includes daisies and dandelions, at Dolni Vestonice. These roots are often quite edible. See http://www.ucl.ac.uk/archaeology/research/profiles/smason/smdolnv.htm 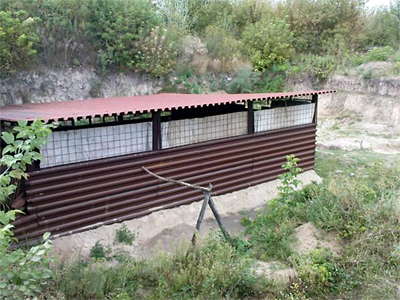 The original site of Mezhirich, with a structure to preserve part of the discoveries from the weather. 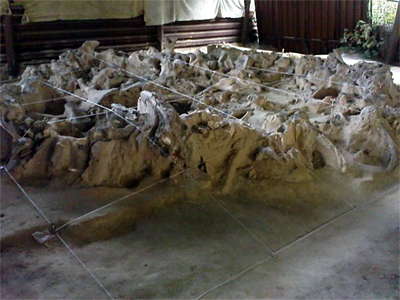 Inside the structure shown above, with part of the site still intact, with mammoth bones. 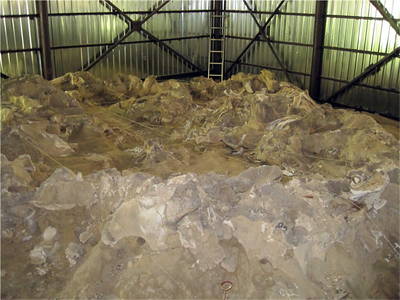 It would appear that the structure used to protect the Mezhirich deposits has been upgraded, from this photo. Note that the walls have been considerably improved. 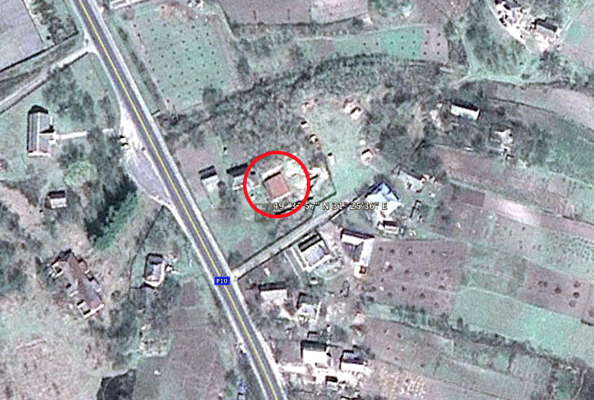 The structure above is circled on this satellite photo. 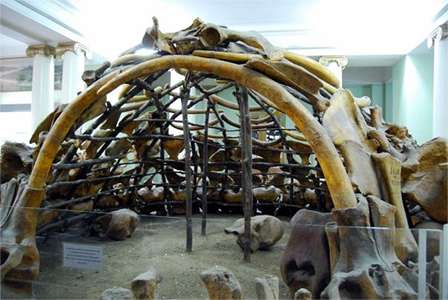 Mammoth bones used to recreate a building of the ice ages.

Source: Display at the Natural History Museum of Kiev. 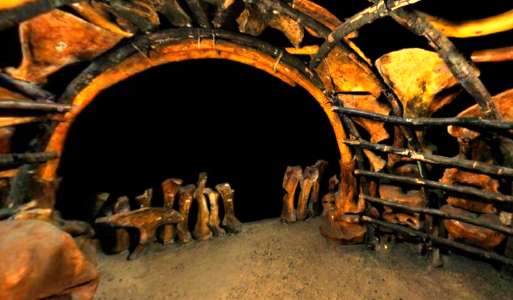 Click on the image to see a panorama of the inside of the mammoth bone house, which you can explore by clicking and dragging your mouse across the image, up, down, left and right. 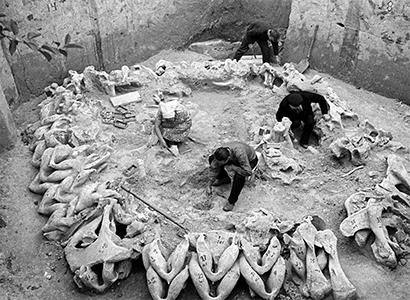 The Mezhirich bone hut during the initial excavation. 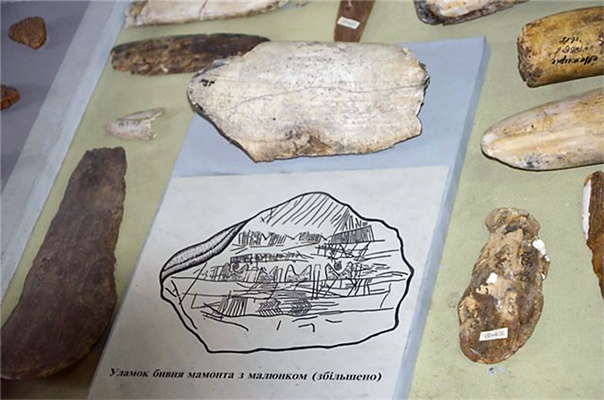 This shows what may be the original map on an ivory plaque from Mezhirich, межиріч, on display in a Russian/Ukrainian museum.

I would be very glad to get a better image of this map, especially of the original ivory plaque. 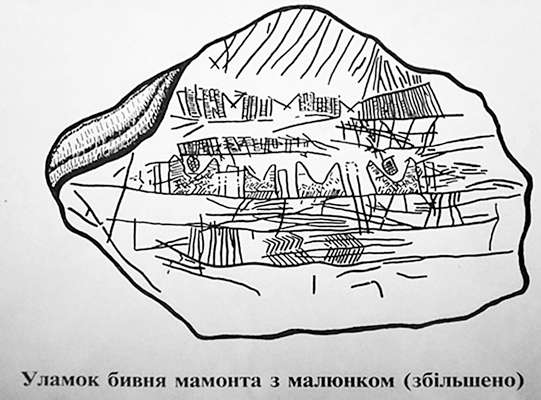 This is a close up of the drawing in the museum shown above. 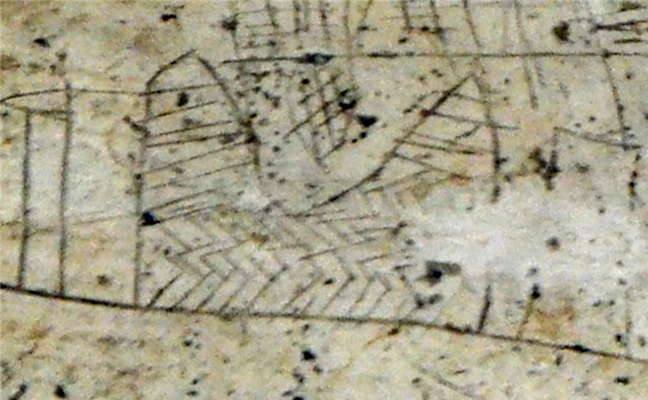 This is a close up of the 'house' on the far left of the central horizontal line in the Mezhirich map above. 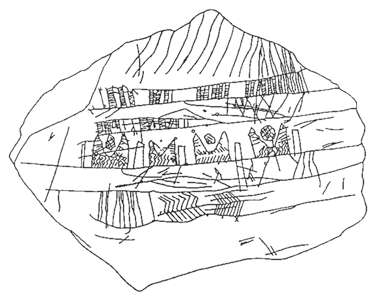 Another version of the map on an ivory plaque from Mezhirich. 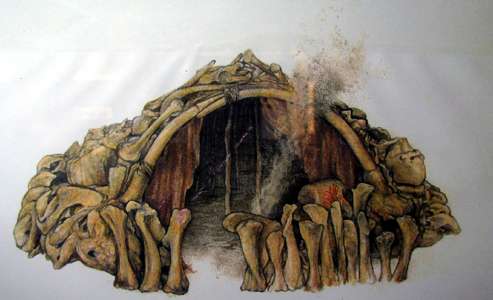 A dwelling in Mezhirich is made of mammoth bones partially supported by a wooden frame. Hides lining the hut serve as insulation.

Text: Translated and adapted from the display. 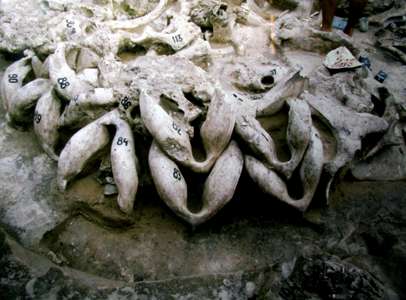 Mammoth bones used in the construction of an ancient dwelling, clearly numbered and photographed for later assembly, Mezhirich in the Ukraine. 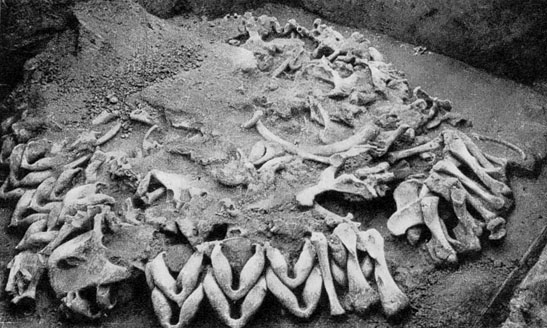 Mezhirich excavation of a hut 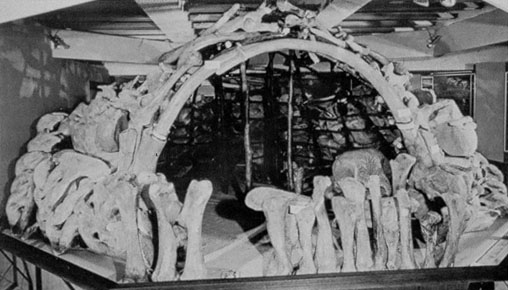 This reconstruction is in the Kiev Museum of Paleontology 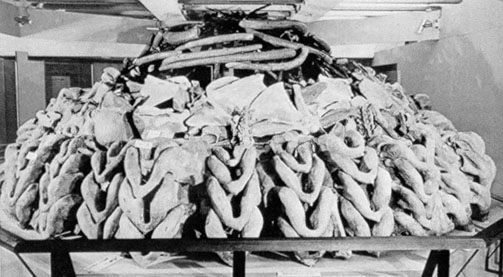 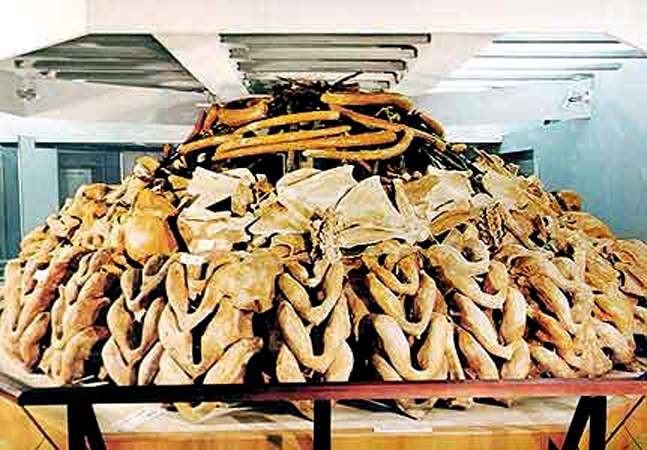 This reconstruction is in the Kiev Museum of Paleontology

Reconstruction of a hut built of mammoth bones and hides in the Ukraine near Kiev. Painting by M. Wilson 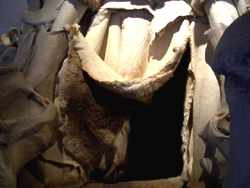 Door to a mammoth bone hut at the National Science Museum in Tokyo. This reconstruction appears based on the Mezhirich discoveries.

Mammoth bone hut at the National Science Museum in Tokyo. This reconstruction appears based on the Mezhirich discoveries.


Photo: O.Soffer, 'The Upper Paleolithic of the Central Russian Plain' 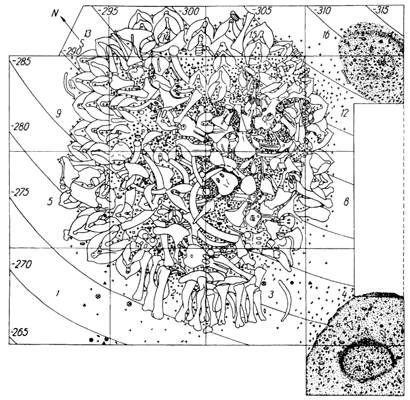 Another version of the diagram above. 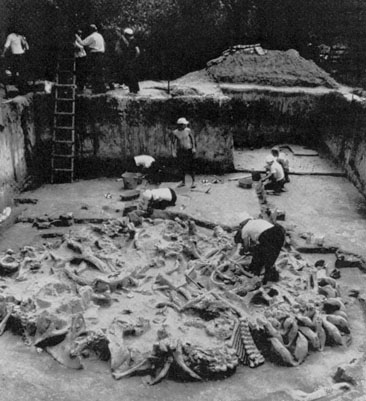 This archaeological site at Mezhirich, Dwelling 4, is now protected by a metal roof, as shown in the photos further up this page. 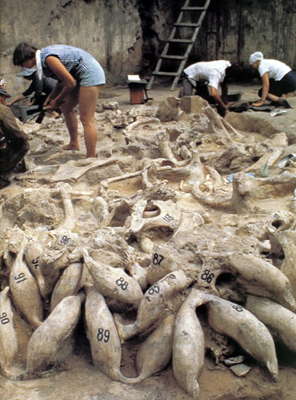 
Photo: O.Soffer, 'The Upper Paleolithic of the Central Russian Plain'