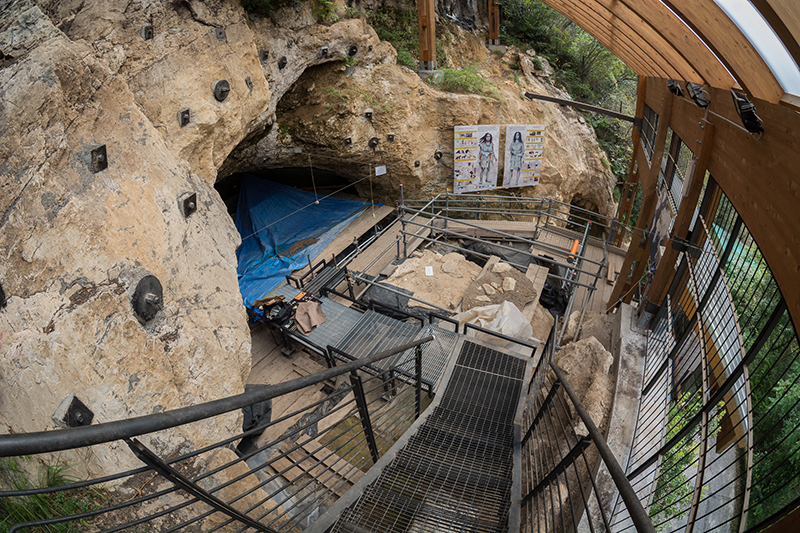 The excavation site of Fumane cave


A fossil marine shell, Aspa marginata, was discovered in a Mousterian layer of Fumane Cave, northern Italy, and was dated to 47 600 cal BP. Analysis shows that this fossil gastropod was collected by Neanderthals, at a Miocene or Pliocene fossil outcrop, the closest of which is located more than one hundred kilometres from the site. The shell was smeared with a pure, finely ground, hematite powder, probably mixed with a liquid. It was perhaps perforated and used as a personal ornament before being discarded, lost or intentionally left at Fumane Cave, some 47 600 - 45 000 cal BP. The minimum age of the Fumane unit in which the Aspa marginata was found predates the oldest available dates for the arrival of anatomically modern humans (AMH) in Europe, thus supporting the hypothesis that deliberate transport and colouring of exotic objects, and perhaps their use as pendants, was a component of Neanderthal cultures.

This fossil marine shell, Aspa marginata was discovered in a Mousterian layer (A9) of the Fumane Cave, northern Italy dated to 47 600 cal BP.
It had probably been used as a pendant on a necklace, and had been covered with red ochre, traces of which remain in pits on the surface. 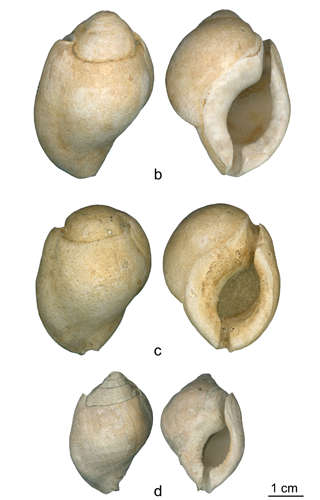 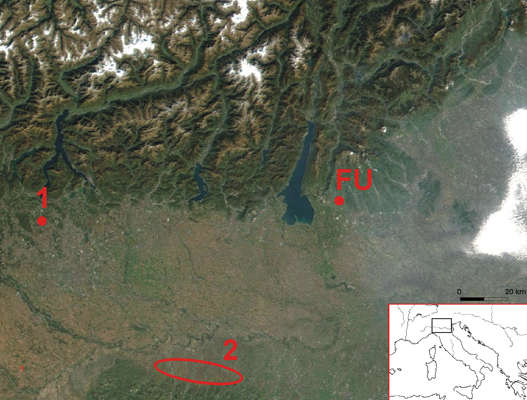 Location of Fumane cave (FU) and of fossil exposures with Aspa marginata shells.

Cassina Rizzardi in the Lombardy Pre-Alps (1); Miocene and Pliocene exposures south of the Po Valley (2) (by www.visibleearth.nasa.gov).

Fumane Cave is located at the foot of the Venetian Pre-Alps in the western Lessini Mountains. The cave is part of a fossil karst system that formed in the Upper Lias oolitic sandstone and is represented as a large entrance in which three tunnels, labelled A, B and C, converge (Figure S2). Excavations over the last two decades yielded a 2.5 m deep Late Middle and Early Upper Paleolithic sequence sealed by thick slope waste deposits (Figure S1) 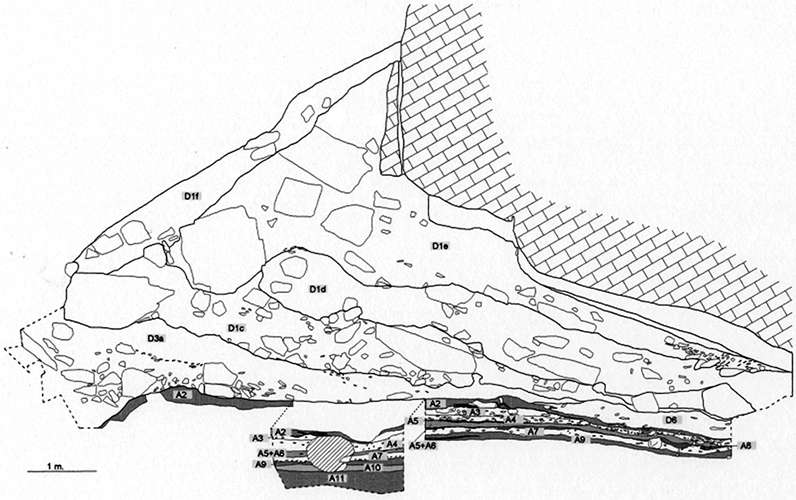 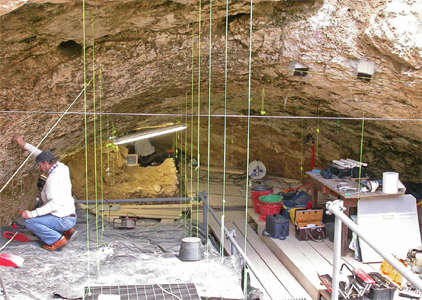 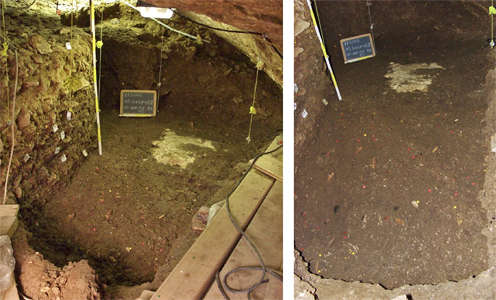 In sub-square 147d, Unit A9 was 15 cm thick and subdivided into two sublevels, A9 and A9base, the latter of which was richer in archaeological remains.

No traces of bioturbation, cryoturbation (churning of the sediments by animals or frost effects) or injections of allocthonous sediment (a sediment or rock that originated at a distance from its present position) were recorded during excavation of unit A9. 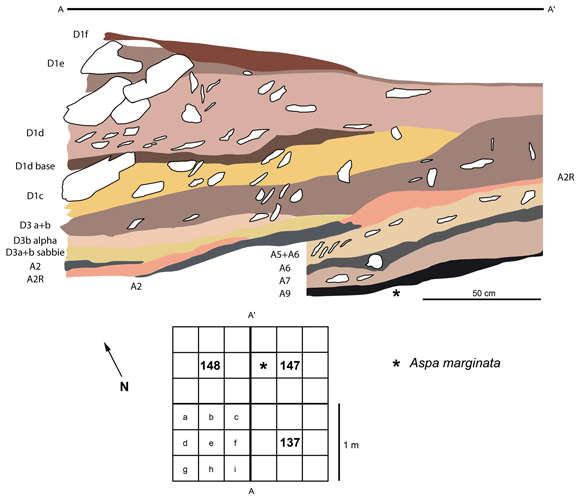 Stratigraphy of the Fumane Cave sequence in squares 137-147, showing the find spot of the Aspa marginata shell. 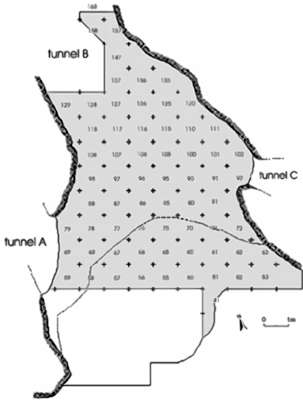 No artefacts diagnostic of the overlying and underlying Levallois Mousterian units A6 and A10 respectively were identified in Unit A9.

The same holds for the Uluzzian and Proto-Aurignacian artefacts, which were absent from the stratum. The associated faunal remains are dominated by cervids (Cervus, Megalocerus and Capreolus), followed by bovids and caprids (Rupicapra and Ibex). Hunting focused on adult and old individuals. Six 14C and one ESR radiometric determinations are available for Unit A9. The former range between 36,450±400 14C BP (LTL-573A) and 42,750±700 14C BP (LTL-376A); the latter is 46,000±7,000 (FU-0004).

Considering the 14C ages obtained from overlying units, known biases due to sample contamination in this age range, and the ESR result, it is probable that the oldest 14C age (47 600 cal BP) is the most reliable minimum age for Unit A9. 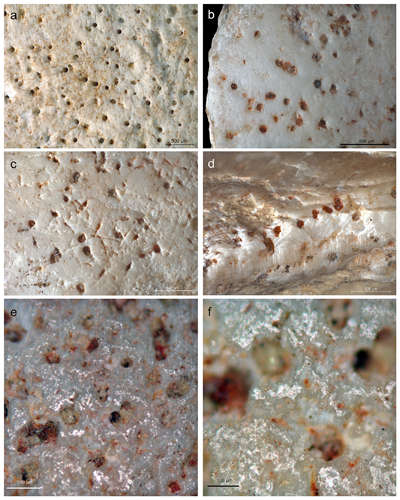 Outer surface of an Aspa marginata shell from the reference collection (a, and from the Fumane specimen (b–f).

Notice the presence on both shells of pits produced by bioeroders associated, at Fumane, with networks of micro-grooves © due to the same taphonomic agent. All micro-concavities on the Fumane specimen (b–f), including pits truncated by the shell fracture (d) are filled with a red substance and prominent areas are affected by a slight polish (e–f).

The shell's outer surface is covered with micropits and, occasionally, networks of grooves produced by bioeroders that altered the shell during the life or shortly after the death of the mollusk (b-c, e-f). These pits and grooves are filled with a dark red substance. Microscopic residues of this substance are also trapped inside irregularities of the shell surface (e-f). This red substance is absent on the prominent areas of the shell microtopography, which display a slight polish (e-f), and virtually absent inside the shell and on the shell fracture (d). Analysis of the fracture identifies truncated pits still filled with the red substance (d). The above features suggest that the red substance was originally more abundant on the shell surface before being partially erased by a gentle post-depositional abrasion.

It remains, then, how to explain the occurrence of a unique ochered fossil shell in this unit? There seems to be no alternative but that its presence in unit A9 and ochre staining is result from human agency. Results have shown that the Aspa marginata shell cannot come from the Fumane Cave wall and must have been collected by Mousterians at a Miocene or Pliocene fossil outcrop. While future research may establish another exposure site with Aspa marginata closer to the site, for now a review of potential sources shows that the closest exposure sites are located some 110 km south-west of the Fumane Cave. The Miocene and Pliocene formations in which fossil Aspa marginata occurs are generally composed of a silty-clay with sand and poor iron content, which significantly differs from the clay/colloidal appearance of the iron rich compound trapped in the pits and grooves of the archaeological shell. This suggests that red pigment was not present on the fossil shell when it was collected by Neanderthals. Red ochre of comparable elemental composition is used to paint the slabs found in Fumane's Aurignacian unit A2 and found in the form of lumps in the same layer. While it is found in superior levels, the ochre detected on the Aspa marginata shell is unlikely a result from post-depositional percolation from overlying ochre rich Aurignacian unit A2R. If ochre would have percolated one would expect to find red pigment staining on artifacts and sediment in intermediate units A7, A6, A5+A6, which is not the case. Although the precise provenance of the pigment used in the Aurignacian unit is uncertain, karst fissures in Lower Jurassic formations filled with hematite rich deposits are known at a number of quarries located between 5 and 20 km far from the site (Zorzin, 2005). These sources may have been used by Neanderthals to collect the high quality iron oxides trapped into concavities of the shell surface.

Four hypotheses can be proposed to refine our interpretation of this find. The shell may have been used as a tool, a pigment container, a 'manuport', or a personal ornament. By manuport we mean a natural object unmodified or very marginally modified and moved from its original context by human agency and later curated, deposited, lost or discarded at an archaeological site. Callista chione and Glycymeris sp. bivalve shells were modified by breakage and retouch by Neanderthals at a number of Italian and Greek sites (Douka et al., 2012).

Three reasons may favor the interpretation of the Aspa marginata from Fumane as a pendant, i.e. an object conceived to be suspended for visual display body through threading or stringing. The attention put to uniformly covering the outer shell surface with good quality red pigment suggests that this action may have been performed to make the object suitable for visual display. The wear detected on the inner lip, made of overlapping groups of striations oriented perpendicular to the shell main axis, is consistent with a sustained friction produced by a cord rich in abrasive particles, such as sinew. The absence of pigment on the shell fracture is most consistent with this item being used as a pendant.

In conclusion, analysis of the Aspa marginata found in Fumane Unit 9 shows that this fossil gastropod was collected by Neanderthals, makers of the Discoid industry, at a Miocene or Pliocene fossil outcrop, the closest of which is located more than one hundred kilometers from the site. The shell was smeared with a pure, finely ground, hematite powder, probably mixed with a liquid. It was perhaps perforated and used as a personal ornament before being discarded, lost or intentionally left at Fumane Cave, some 47 600 - 45 000 cal BP. The minimum age of the Fumane unit in which the Aspa marginata was found predates the oldest available dates for the arrival of anatomically modern humans (AMH) in Europe (Banks et al., 2013) thus supporting the hypothesis that deliberate transport and coloring of exotic objects, and perhaps their use as pendants, was a component of Neanderthal cultures.

That the pendant appears well before the presumed first appearance of AMH in Europe indicates that Neanderthals made this art object without the influence of AMH. The use of this shell by Neanderthals as a result of contact with immigrant AMH is also contradicted by the absence of this particular taxon of shell at Early Upper Paleolithic sites across Europe. The only other Paleolithic occurrence is a specimen found in the Epigravettian horizons of Riparo Tagliente in the Lessini Mountains of NE Italy. Thus, this discovery adds to the ever-increasing evidence that Neanderthals had symbolic items as part of their culture. Future discoveries will only add to our appreciation of Neanderthals' shared capacities with us.