Blombos Cave is some 100 metres from the coast and 35 metres above sea level. Interior cave deposits, including those in recesses, cover more than 80 square metres. About 20 square metres of the Middle Stone Age (MSA) has been excavated to a depth of about 2 metres below the original surface. Excavations carried out since 1991 at Blombos Cave provide snapshots of life in the African MSA in the southern Cape, South Africa. Three phases of MSA occupation have been identified and named M1, M2 and M3. Dating by the optically stimulated luminescence (OSL) and thermoluminescence (TL) methods has provided occupation dates for each phase: these are about 73 000 BP for the M1 phase, about 80 000 BP for the M2 phase, and between 100 000 and 140 000 BP for the M3 phase. The evidence indicates periods of relatively brief occupation separated by long periods of non-occupation, including a separation between occupation during the Late Stone Age (LSA) and the Middle Stone Age. Bone tools, marine shell beads, and engraved ochre were found in the M1 phase, bone tools in the Upper M2 phase, and considerable quantities of ochre and associated ochre working tools in the M3 phase. 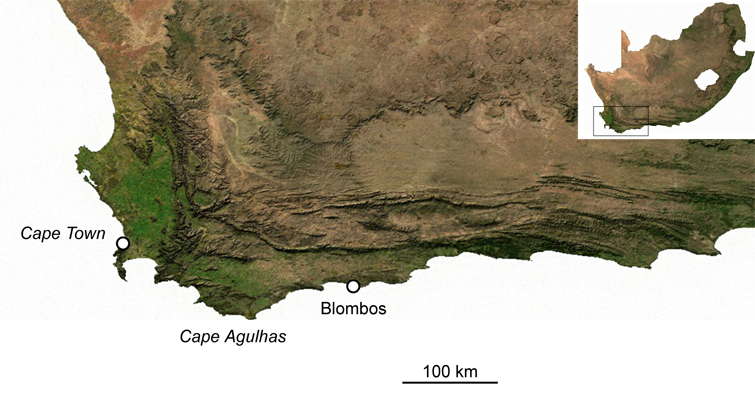 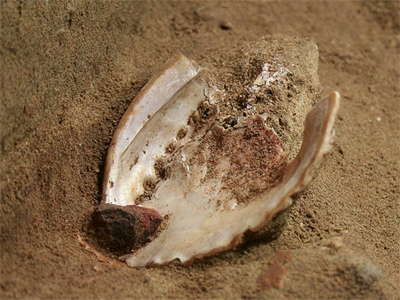 This abalone shell was found with an ochre-covered grindstone on its lip.

A coating of bright red powder on the insides of a pair of 100 000-year-old abalone shells is evidence of the oldest known art workshop, a new study says.

The powder was found inside two shells in Blombos Cave near Still Bay, South Africa (map). The substance is the dried remains of a primitive form of paint made by combining colourful clay called ochre, crushed seal bones, charcoal, quartzite chips, and a liquid, such as water.

'A round [stone] covered the opening of one of the shells, and underneath it was absolutely bright red,' said study leader Christopher Henshilwood, an archaeologist at the University of Bergen in Norway and the University of the Witwatersrand in South Africa.

In addition to the shells, the team also found grindstones, hammerstones, the remains of a small fire pit, and animal bones that were used to transfer small amounts of the paint.

Blombos Cave has been inhabited off and on by humans for at least 140 000 years, but the ochre-paint studio seems to have been active about 100,000 years ago. Prior to the new discovery, the earliest known ochre-making workshop was 60 000 years old, Henshilwood said.

The discovery is also proof that early humans were capable of long-term planning and had at least a rudimentary knowledge of chemistry, according to the study authors.

'They seemed to know that seal bone is really rich in oil and fat, which is a critical component in making a paint-like substance,' Henshilwood said.

'They also knew to add charcoal to the mixture to bind and stabilise it, and a little bit of fluid, which could have been water or seawater or urine.'

While relatively few ingredients were used in the ancient paint, each item had to be individually prepared before everything could be combined inside the shells. For example, the ochre pieces had to be crushed and ground into a powder, the bones had to be heated to release their oils and then crushed, and wood had to be burned to create charcoal.

'The mixture was very gently stirred, and you can see the traces of the stirring [done by fingers] on the bottom surface of the abalone shell,' Henshilwood said.

It's not clear what the ochre paint was later used for, but Henshilwood said it's easy to imagine early humans using the substance to decorate their bodies or cave walls.

There is even evidence that the early artists purposely adjusted the colour of their pigments.

'In one [of the shells], there was a tiny piece of a yellow mineral called goethite, which may have been added to change the colour slightly,' Henshilwood said. 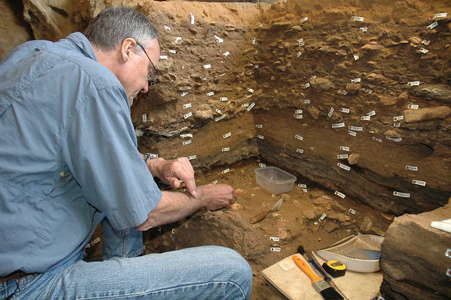 Engraved ochre from Blombos Cave, South Africa. This is of the inverted artefact, showing the 'underneath' side. 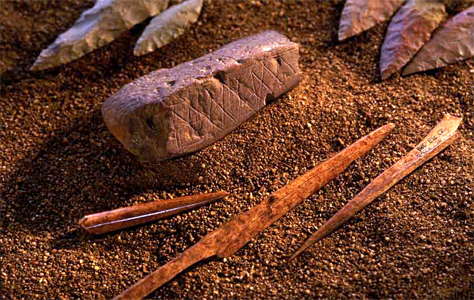 The worldŌĆÖs oldest example of abstract art, dating back more than 70 000 years, has been found in a cave in South Africa.

Scientists say the discovery shows that modern ways of thinking developed far earlier than we think.The abstract art was found on two pieces of ochre in a cave on the southern Cape shore of the Indian Ocean. Previously, the earliest evidence of abstract art came mainly in France from the Eurasian Palaeolithic period less than 35 000 years ago.

Dr Christopher Henshilwood, from the State University of New York at Stony Brook, says: 'They may have been constructed with symbolic intent, the meaning of which is now unknown.

Dr Christopher Henshilwood believes the items are significant: 'The engraving itself is quite a complex geometric pattern. There is a system to the patterns. We donŌĆÖt know what they mean, but they are symbols that I think could have been interpreted by those people as having meaning that would have been understood by others.' The engraved ochre pieces were recovered from Middle Stone Age layers at Blombos Cave, 290 kilometres (180 miles) east of Cape Town, and are at least 70 000 years old.Dr Henshilwood says more than 8 000 other pieces of ochre were found in the cave, many of which had been rubbed smooth as if to make pigment powder.

Ochre, a form of iron ore, is frequently found in Stone Age deposits less than 100 000 years old. It may have been used as a body or decorative paint.

The researchers believe that the ochre was first scraped and ground to create flat surfaces. It was then marked with cross hatches and lines to create a complex motif. The find pushes back by some 35 000 years the earliest time when biologically modern humans were known to have developed modern behaviour. 'The theory up until now has been that modern human behaviour started only around 40 000 years ago,' says Dr Henshilwood.'The whole of South Africa was occupied by a biologically modern people who had evolved about 150,000 years ago.'

The research team excavate in Blombos Cave 'There is no doubt that the people in southern Africa were behaviourally modern 70 000 years ago.' Scientists believe that these finds demonstrate that ochre use in the Middle Stone Age was not exclusively utilitarian and, arguably, the transmission and sharing of the meaning of the engravings relied on fully syntactical language. While the markings are suggestive, not all scientists are prepared to classify them as a form of artistic expression and abstract thought. Steve Kuhn of the University of Arizona says the finding is the result of some 'very good work by some very serious researchers'. But he adds: 'IŌĆÖd be more comfortable if there were more of these engraved stones; if these alleged symbols were found many times in different places. It is possible they were just doodlings that really didnŌĆÖt mean anything.'

Blombos Cave is 290 kilometres (180 miles) east of Cape Town
The research was funded by the US National Science Foundation and is published in the journal Science. 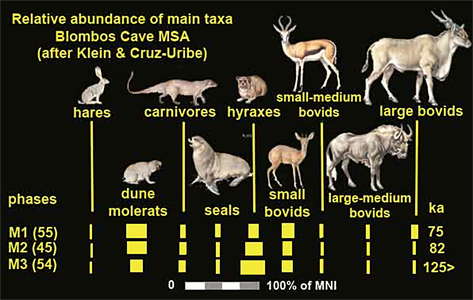 More than a thousand fish bones, many from large fish, marine shells, seals and dolphins, attest to extensive exploitation of aquatic resources and suggest exploitation patterns not dissimilar to those of LSA (Later Stone Age) people in this region. Nine human teeth, mostly deciduous, have been recovered from the MSA levels, but no other human skeletal material. The teeth probably derive from fairly gracile individuals and are similar to samples recovered at Klasies River Caves and De Kelders. 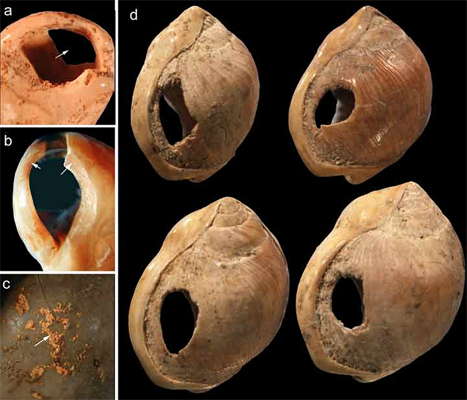 a) aperture made with bone tool
b) flattened facets produced by use wear, probably by rubbing against other beads, string or gut
c) ochre traces inside shell, possibly transferred from body of wearer
d) shell beads external view 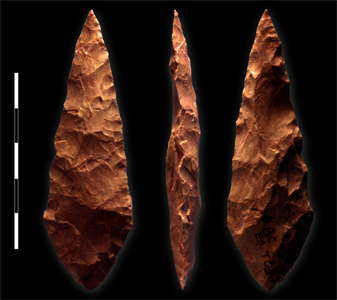 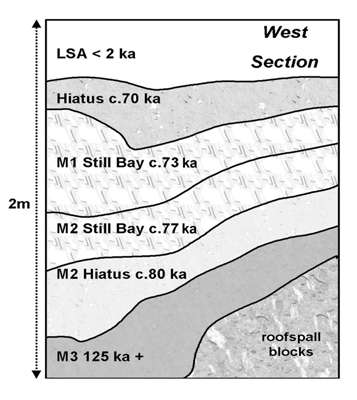 Stratigraphy and dates of the west section of Blombos Cave

Permission: This work has been released into the public domain by its author, Chenshilwood at the wikipedia project. 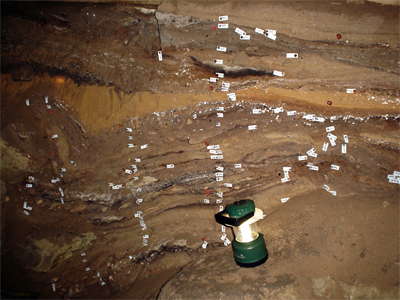 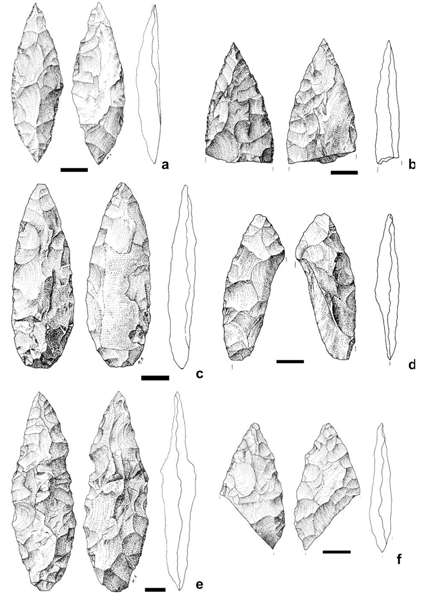 (Typical Still Bay points are bifacial foliate points - Don ) Drawings of Still Bay points from Blombos; the production sequence, which includes phases 1 to 4, is described in the text. Catalogue numbers preceded by a P or a T are those assigned by MS; numbers with PV or PVN have been assigned by PV. Three pieces, kept in a showcase at the Iziko Museum, are listed as Museum 1ŌĆō3. (a) Double-pointed phase 4 point, fine silcrete (P 71, layer CD); the point was modified after phase 3 by two notches near the tip by hard hammer percussion. (b) Phase 3 broken point of fine silcrete (P 68, layer CD); the manufacturing break is a lateral snap with a lip. (c) Phase 3 point with a narrow straight base of coarse silcrete (PVN 7, layer CD). (d) Lateral-distal fragment of an almost finished point pf coarse silcrete with a perverse fracture; this knapping accident occurred during phase 3 (P 67, layer CD). (e) Phase 2a point of fine silcrete, with areas of cortex in the center part (P 70, layer CD). It was abandoned probably because many flake scars are too deep and irregular to be corrected. (f) Phase 3 of fine silcrete (P 42, layer CB), the break is an oblique lateral snap with a curved profile. Scale bars ┬╝ 1 cm. 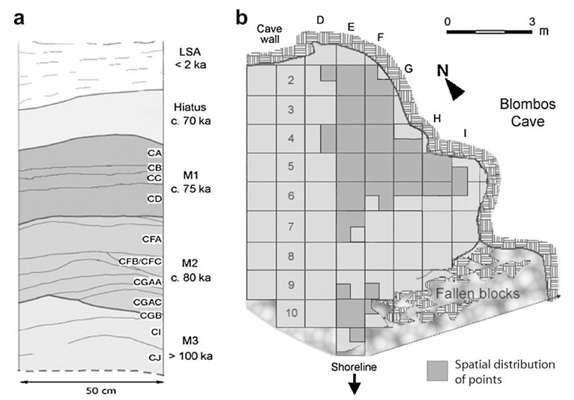 Plan and stratigraphy of Blombos Cave. 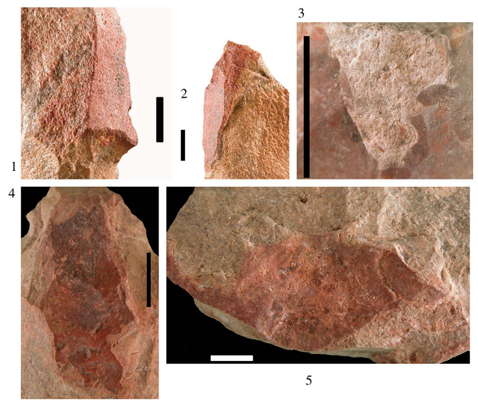 (Note the poor material the knappers had to work with. Mostly silcrete, a poor, coarsely grained material which it is difficult to get a really good edge on, and difficult to retouch, quartzite which is often a poor material, some quartz which would have been very welcome, and one example of a material similar to flint. They did it tough. Despite this handicap, they created some sophisticated and well made points. The nearest source of the silcrete is ~30 kilometres away - Don ) 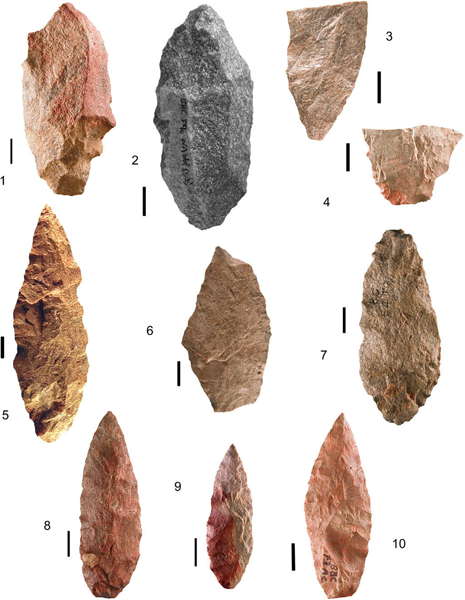 The high incidence of Still Bay points at Blombos and their fine flaking have been considered as possible evidence of craft specialisation and, by extension, trading (Deacon & Deacon 1999).

The implication is that during the M1 phase Blombos was a specialised workshop where points were made to be brought to other sites outside the group range for reciprocal trading. Photo: Villa et al. (2009)