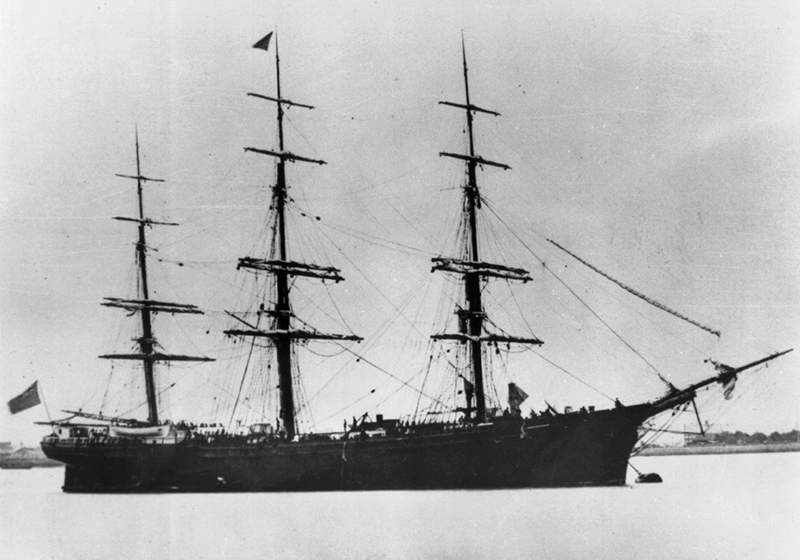 This is the ship Royal Dane, on which Charles William and his wife Emma (nee Fuller) came out to Australia. The photo seems to have a short exposure, as several figures may be seen on board, not blurred in the slightest. Probably copied from a postcard photo taken at Harmer Street, Gravesend in 1872. The photographer was F.C. Gould. William Henry was born on the ship on the 24th July 1865 while the ship was anchored in Keppel Bay. The account of the voyage from Madge was somewhat colourful compared with historical records.

Note that Keppel Bay was the harbour for Rockhampton, and passengers and goods were rowed up the Fitzroy River in rowboats at first, and later in small steamships (from at least 1865) since the river was not deep enough nor wide enough to accommodate sailing ships the size of the "Royal Dane" (1616 tons when built) with a draft according to Charles French's diary of 21 feet. The depth of water at the Upper Flats, Fitzroy River was 11.40 feet at high tide, a spot about an hour by steamer downstream of Rockhampton. Even Brisbane bar in 1874 could not admit ships drawing more than 15 feet.

Summary of Arrivals in Queensland for the ship "Royal Dane":

(The following paragraphs are taken from "Two Famous Clippers' Performances" written by A.G. Davies in the Courier Mail, Brisbane, March 10, 1934)
....Another ship whose name became familiar to thousands of Queenslanders was the Royal Dane, also an American-built ship, known to the mercantile world for the first few years of her life as the Sierra Nevada. Although the performances of the Flying Cloud were more astonishing than any credited to the Sierra Nevada, the latter, nevertheless, was in the first flight of the extreme clippers which made notable passages between New York and San Francisco in the 1850 - 60 decade.....

Built at New York, [registered Portsmouth USA] in 1854, the Sierra Nevada (to use her original name) proved herself worthy of inclusion among the best of the clippers by her early passages on the Cape Horn route between New York and San Francisco. [The Royal Dane was a big three decked ship of 1616 tons] When acquired by James Baines and Coy. for the Black Ball fleet her name was changed to Royal Dane, as a compliment to the Danish princess, Alexandra, who had married the Prince of Wales, afterwards Edward VII. On her first appearance in Queensland waters she was bound for Keppel Bay, with 540 immigrants, and she dropped anchor in that harbourage on July 25, 1865, after an excellent passage of 93 days. She was then commanded by Captain Lewis Davies, who afterwards brought her out to Moreton Bay in 1867 and 1869, each time with a large number of new settlers. In 1870 Captain Daniel R. Bolt and Mr. George Cater, who had been master and mate respectively in the Young Australia, transferred in like capacities to the Royal Dane. Both were well and favourably known in Queensland over a long course of years. Under Captain Bolt the Royal Dane voyaged to Keppel Bay in 1870 and to Moreton Bay in the following year. It was rather a coincidence that the next commander of the Royal Dane, Captain James Cooper, should also have been master of the Young Australia just before his appointment to the other ship. It was after the wreck of the Young Australia on Moreton Island, an unfortunate happening, for which Captain Cooper was not in any way blamed. Under Captain Cooper, the Royal Dane made two voyages to Moreton Bay - in 1873 and 1874. She was then withdrawn from the Queensland trade; and, with the same commander, made two or three voyages from Mobile, Alabama, to London or Liverpool, with cotton. She ended her career by foundering off the Chilean coast, near San Carlos, on June 15, 1878.[when homeward bound with guano.] Captain Cooper afterwards returned to and settled in Queensland, and was for some years in the service of the Harbours and Rivers Department. Captain Bolt was subsequently appointed by the Queensland Government as inspector of immigrant ships in London. He later went to sea again, and had command of the ship Harbinger, a well known passenger vessel on the London to Melbourne run.

The following is from the excellent Clipper Ship pages of Lars.Bruzelius, at http://pc-78-120.udac.se:8001/WWW/Nautica/ships/Clippers/Sierra_Nevada(1854).html

When in 1858 she sailed from New York to Melbourne in 105 days under command of Captain Blaney, there are records of two people having landed as immigrants, http://home.vicnet.net.au/~provic/185259/sompeng.htm

A different sailing ship also called the Sierra Nevada was wrecked at the turn of the Century at Portsea Back Beach in Victoria.

There was another Royal Dane, too, an English ship, launched in the yard of L.Wheatley, Sunderland 1863

[with a draft of 21 feet, it is no wonder that the Royal Dane could not be towed up the Fitzroy. D.H.]