The Danube in the Iron Gates region, with Romania to the left and Serbia to the right.


I have for years thought about driving along one / some of Europe's rivers, because it's normally where societies / civilisations / cities are founded. They used to be major traffic lines (some still are), and therefore one can normally expect to find beautifully old houses, castles and churches along them. I'm also a big fan of the Earths Children series by Jean M. Auel ("The clan of the cave bear", "The valley of the horses", "The mammoth hunters", "The passage of the plains" and hopefully 2 more books in the near future). In "The passage of the plains" Ayla and Jondalar travels from Ukraine to the Dordogne valley in France, they follow the Donau (Mother) river for most of the way.

Likewise I didn't feel like going to Ukraine on a legal "Road Racer", I felt that Rumania would be bad enough (it would be much worse than I imagined). The best thing would be to buy an off-roader for the trip but I didn't feel like selling my current bike, the best I ever had, a Suzuki GSX-R 1100 H. It has lots of low end Grunt, top end Oomphhh, low weight, fantastic brakes and handling, as Street fighter magazine said : The 1986, 87 and 88 GSX-R 1100 are possibly the best bikes ever made, you can go anywhere on one (I suppose they meant on tarmac).

A major reason for buying that bike in the first place was a nasty traffic accident on April 1st 1994, "a very bad April fool", after which I have limited movement and strength in my left arm (+ damaged short term memory). I wanted a light motorcycle for that reason (not more than . ~ , dry), and preferably with a big engine.

Any jerk can drive straight on a heavy bike, but parking maneuvers with a stopped engine or (God forbid) a "tilted" bike, is also something that one should be able to handle. The damaged memory enables me to write this story ! Say what ?.... well in order not to forget what happened "yesterday", I decided to keep a dairy, I dislikes to write but I haven't got any better ideas which enables me to "remember" my holiday.

During my planning I discovered that there was two places called Dolní Vestonice, one in the Slovak Repl. and one in the Czech Repl., I wanted to see the right one and there was other places that I couldn't find on the maps. To my luck I stumbled on some maps made by Don Hitchcock from Australia on his home page, they are of a very high quality. I wrote an Email to Don asking for other geographical info regarding places from the books, I would like to thank Don for his outstanding help to a complete stranger, thanks mate.

Get visa to the Serbian Republic (if I had applied more than a month before I needed it I would have gotten it for free), the visa to Rumania was cheaper to buy at the border than here in Denmark!

Packing Friday, home to mother for dinner, I would start my trip from there, because they live in the south end of the city, so I wouldn't have to start with going through the city first. I planned to avoid the motorway in the beginning too, because of repair work. Later I drove home to collect the details that I forgot in the first place (isn't that the way it always goes?). The odometer says 75968 km. 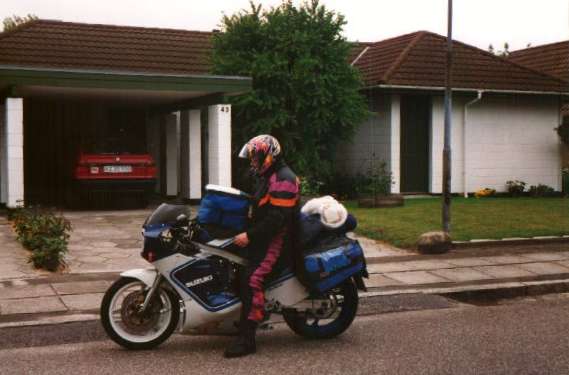 Ready to go, drizzle and too much luggage.

Rise at seven o'clock Saturday morning, take a shower, breakfast and pack the bike. Ready for departure at 08.48, press the button, puff puff.... damn etc. until I discovered that I haven't engaged the choke completely. Pull it all the way out, press the button again, phew that helped.

Mum was almost crying, she probably felt the same way as I did when they were going round the world or on their trip to Egypt.

The bike feels a bit weird with all that luggage on board, but runs fine. No traffic on "gl. Horsens landevej" (Old Horsens country road), a lot from Vejle to Kolding, but otherwise free all the way to the border (German) and until the autobahn from Kiel merges with No. 7 to Hamburg. Dew on the visor (weather = drizzle) until 50 km before Hannover, wonderful that it stopped.

First tank stop was Hüttner Berge (as usual), the next stop, a lovely truck stop in Peine (20 Km from Hannover), ate my sandwiches in the ice cream kiosk! (no it wasn't open because of the weather, it starts to drizzle again).

Took the main road from Magdeburg to Dessau, a nice change to the autobahn. Almost out off gas before Dresden, and I haven't seen any road signs informing of any for the last 100 km so I leave the autobahn and find one in a little town called Wermsdorf: a very sweet (and beautiful) young woman is on duty at the moment and a lot of the young men in the village are parked outside pretending to ignore her (I do understand them).

Back on the autobahn I discover that only 10 km after where I left it to find gas there's a tank, oh well, better safe than sorry. Found a "Zimmer Frei" (B&B) at Pension "In der Laue" in Karsdorf outside Dresden.

Nice guy (oldest son?) helps me carry all the luggage up, and down again the day after.


Meet the father, he asks if I would like to get the bike into the garage, I say thanks but Im leaving in 15 minutes, say good bye at 10.15 and head for the Czech Border, beautiful landscape, see a lot of small gauge railroad tracks, they run along with the road with a gradient up to 10%.

10 minutes later I suddenly meet a small Tender Locomotive with 4 wagons and a post car, cute, looks like one of the smallest Märklin railway models, I'm sorry that I didn't have time enough to stop, get the camera out and take a picture before the train disappeared again.

Did by the way also see the smallest Tender Köf one can imagine yesterday (no I don't know what they are called in English, just that they are not big enough to be called a locomotive), by the railway crossing in Schora, very beautifully polished.

A few kilometres later in Schmiedeberg (if I remember correctly) something's wrong with the road signs, and I decide to follow the sign saying border for trucks and buses, bad choice as far as road surface goes (several kilometres of cobble stone) a very pretty road....... But not very enjoyable in the rain, oh did I forget to mention that it's raining again?

Well arrived at the Slovak border, at the end of the day around 19.30, I able to determine that : the tank bag isn't water proof (the sales man had warned about that) and the rain cover isn't either......... dam. Wet socks, etc. but I'm warm enough anyway. None the less, I did enjoy the landscape a lot and the pleasure was even greater in the approx. 10-15 minutes where the sun almost shone through the sky, wonderful light.

I'm cheating here ; this is 3 pictures put together. The left is towards east, then south and last towards west.

I came through a village full of tourist coaches on my way to Prague, I couldn't see that it was that interesting. I could see a very big cemetery after I rounded a corner, with a big Jewish star, aha .... next after that the city limit sign (end) ; Terezin, oh, of cause, Teresienstadt (concentration camp).

After Brno I had a "navigational error" again, I never saw the sign to turnoff towards Uherské-Hraddiste, so I ended up in Olomovc, arrgh, (during this distance: 5 km where it hadn't rained....! ).

Finally I arrived at the Slovak border, didn't see any "Zimmer Frei", so I took a motel at 900 Kr. (Czech) 1 kilometre from the border. A pretty valley, good food and some very beautiful women in the bar.

I felt a bit awkward, sitting in the bar and being the only one eating (there was no one when I ordered) and suddenly there was 20-30 people looking at me in a strange way (they thought that I was German). A propos: the receptionist thought that my passport was phoney, she didn't believe that there existed a country called Denmark, not before I found a map where I could show her.

Other than that, the biggest difference between here and the west seems to be the amount of cars parked all over with the hood open or changing tires, and no it's not always the old junk parked there. Later I happened to remember that old Skodas had the engine in the back so maybe a lot of them were actually having a picnic, hmm.....

The moon's shining this night.