The diary entry for today starts with:

It can be a bit difficult to write about things more than 24 eventful hours after they happened. So numbers first 79292 Km........

Well now that I'm more distanced from the events, I'll try to recreate the day with the help of photos and the map, so here goes :

Rise and wash, over and get some breakfast.

Then washing the bike, that really improved appearance, and the cooling of the engine, the radiator and the whole front of the engine was totally covered in a two inch thick layer off mud. Left around 12 for the border/river, to take some pictures and the first glimpse of Bulgaria. 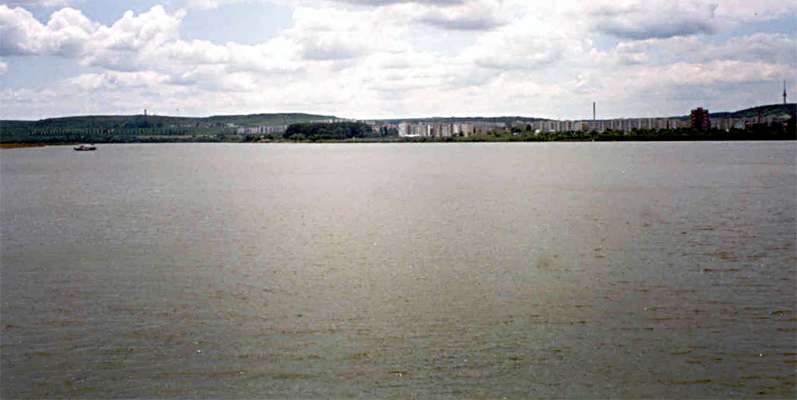 Can you see the Boeing airliner on the ground in the foreground on the other side (Bulgaria) ???

The first place where I see the whole river as one and it's big, I'll guess between 1 Km and 1 mile wide (actually more like 1.5 mile ~ 2.4 Km.). The Bulgarian town Solistra looks nice from a distance and there's a huge private jet parked in front of one of the buildings over there, maybe they are better off financially. 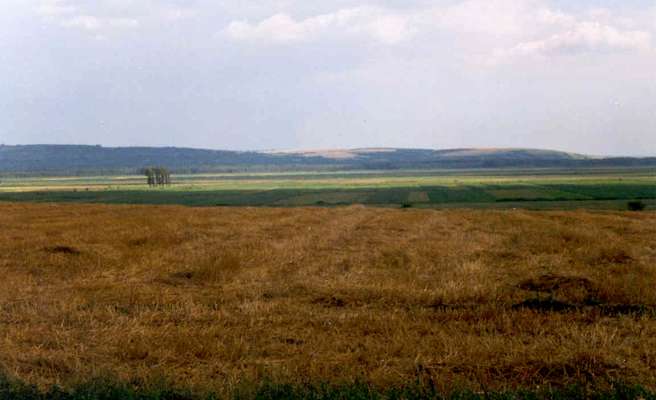 But this is what I saw of the river for most of the distance in Romania. If you can see the thin tree line in the horizon just before the landscape starts to rise ...... Those trees grow on the shores of the river.

Back to Câlârasi in order to find the road to Oltenija, Giurgiu, Zimnicea, Turnu-Mägurele, Corabia, Bechet and finally Calafat. I was stopped by the police in Giurgiu for the first time on this holiday, he had seen me drive forth and back looking for the road to Zimnicea, so he asked me where I was going and then he drew a map on how to find my way through town to the right exit, very nicely done. This was my first encounter with the local police, but unfortunately not the last. 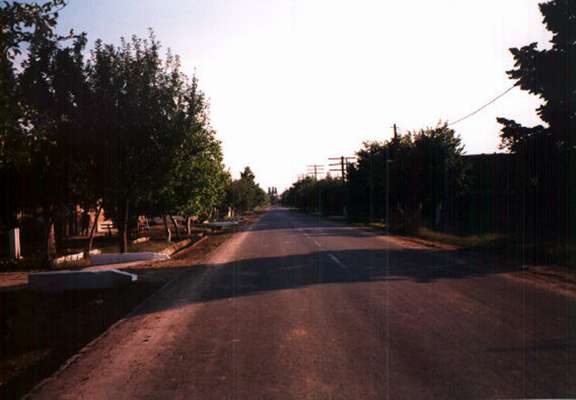 A typical Romanian village, all the houses are located along the road and no side roads, so the bigger it is the longer it is. 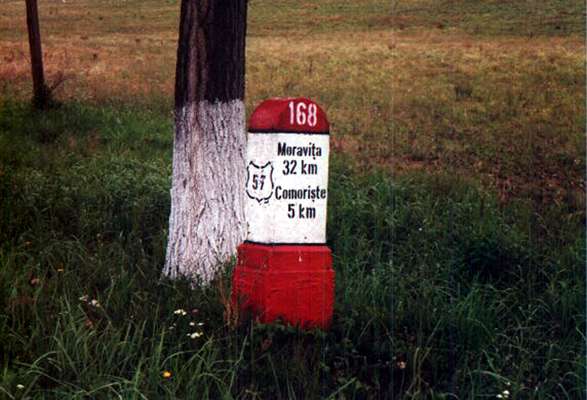 I arrived in Calafat at 19.25, and asked a well dressed man for a hotel, he signed for me to drive down the road and left. I tried a few of the ones to the left and one of them led to the harbour so I turned around and on my way back to the main street/road I stopped a couple of teenage girls and asked if they spoke English, they did, so I asked for a hotel, one of them started to tell me the direction but her friend stopped her and told her that they wanted money for it.

I wasn't going to take my gloves of and flash my wallet on the street, and while I was trying to tell them no way, I found myself surrounded by young people trying to take my luggage. No time for polite exits ; first gear, gas and let go of the clutch. The same thing happened the next place I stopped to look around, so I decided to leave town at 19.55.

5 kms out of town I told myself that it was around the time when I normally phoned home, I stopped and found the phone, dialled mum and dad, and while I talked to them a car pulled over and a woman came towards me. She said: "Er du også dansker?" (Are you also a Dane ?), and I replied : Yes I am, how did you guess that? That stopped her for a while (I answered her in English, because I couldn't imagine any one talking Danish to me here), then she asked me why I spoke English, and I realised that she was Danish.

Told mum that my problems regarding where I should sleep tonight were solved and depending on how late, I might or might not phone her again. The couple in the Range Rover (just about the only vehicle for Rumania roads), Kim, Syss and their three year old son, had just crossed the border from Bulgaria to Rumania in Calafat (it took just 4 hours of paperwork!).

They were heading for a camping site in Baile-Herculane, and asked if I wanted to tag along, suited me fine to drive behind them with all these loose cows, cars, horse carriages and people on the road without lights or reflectors, better they hit them than me.

After 55 minutes we were pulled over by a patrol car in Turnu-Severin, he took our passports and ordered us to drive back to a control post 5 Km's back. When we arrived there he took out the international traffic code (law book in French), he spoke a few words of English, a few French and Rumanian of course, and by using the books illustrations, he told us that 10 Km. earlier we had:

Been driving more than the 30 Km./h (18 m/h) that the signs on the 4 track road said. We could quickly determine (in Danish of course) that it was a fraud, there had not been four tracks, only two the whole way, and 30 Km./h is something they only use in conjunction with zebra crossing or road repair and we hadn't seen any for the last 20 Km.

It's definitely a fraud, but the cops are the real thing, car, radio and all, his colleagues weren't involved, they only looked at our vehicles. He told us that normally we would lose our licence for 3 months and get a note in our passport and we would have to go to the capital and the Danish embassy to get a permit to go home, but he was a nice man in a good humour, so if we paid the fine in cash now we would be free to drive directly to the border and leave Rumania with our driving licence intact.

The price had unfortunately risen because of the recent devaluation of the Rumanian Lei (bad argument, a Rumanian citizen couldn't/shouldn't pay more because his money had lost value), so the price was now 1.600.000 Lei, no Deutsch mark, no Dollars, just Lei.

Well I had 500.000 Lei and Kim & Syss had none, so we told him we had a problem and he replied no problem there's a changing office where he first stoped us, they were open from 06.00 to 22.00 and then he realized that it's 23.30. He agrees to accept Deutsch marks because of the hour, we strip wallets, money belts and all our other hiding places in front of him so he can see it's all our money he's getting.

In the middle of all this Kim & Syss son wakes and call for his parents, Kim gets him while Syss is arguing with the officer about the missing last 20 Dm., when he discovers the they have a child with them, he decides to give Syss 50.000 Lei back, so they can buy the son a coke, and since we can't pay more, he lets us go.

Before we leave he decides to tell us where all the rest of the control posts are on the way out of Rumania, nice man, not. He advises all his colleagues that we are coming, in order to get us out of any further trouble, I won't say it worked very well, we were stopped by them all for the next 50 Km. (they only checked our passport and licence). We arrived at the camping site at 02.30, where we grabbed a bite before we turned in, we were even more sure it was a scam now; no proper documentation, nothing in writing and the fact that Syss could haggle about the price. I slept in the back of the Rover, fine. 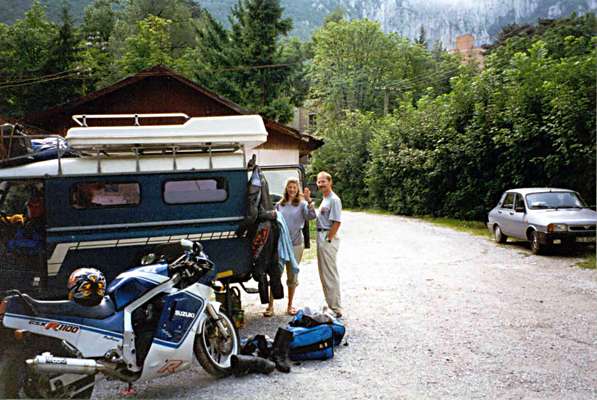 Kim & Syss at the back of their Land Rover where I slept that night, at Baile-Herculane.