I'm still reading, decide to stay another day, I need the rest, I've been driving for 13 days now.

Try to repair the ignition system for cylinder 1 & 4, remove the side panels, tank and a few other items, found two female spade plugs that didn't sit so tight as one could wish, tightened them with a plier. Unbend the two lower fairing mounts, tighten the chain, top up on the engine oil, fill oil on the Schott Oiler again since the engine still tight, all in all 2 hours of work. Hope that solves the problems, but I won't know until I have driven at least a few hundred kms.

Take a hike later in the day, that hurt, easy to tell that I haven't been using my legs a lot lately.

Rise at 9, breakfast, hot shower, pack and write a little, feel very fresh after a day of rest. Leave at 12.08, fill her up again, through Regensburg, a few kms of old city with small houses along the river, nice. The area around and the city of Keilheim is interesting and looks good but other than that there's not much I can see of the river today. 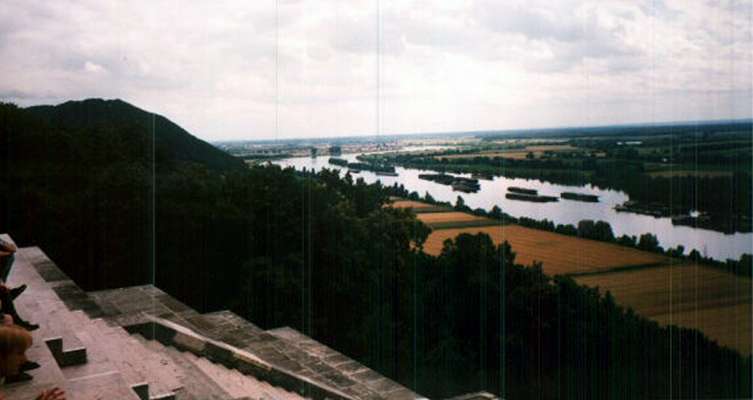 The river seen from the steps of Valhalla, downstream of Regensburg ....... Notice all the big river barges.

...and to the other side towards Regensburg. 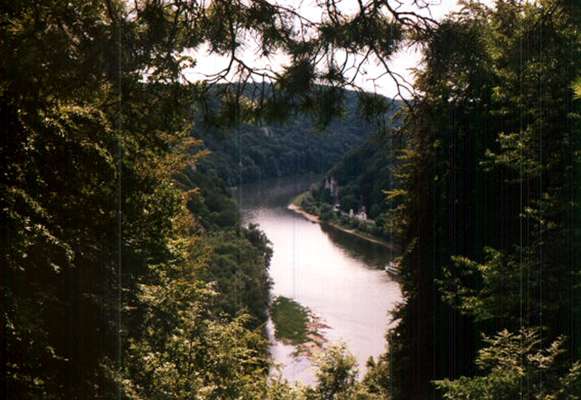 Taken just to the east of Keilheim. There's a very Roman looking "Castle" looking over the city (behind me). 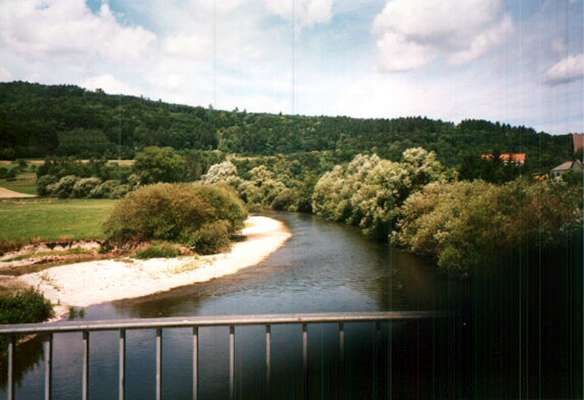 Suddenly the river has "shrunk" quite a bit, I can't help wondering; am I still on the right track ?

The machine starts to misfire at 281 Km. on the trip counter, sh.., wait a minute, maybe it's just out of gas on the main tank, turn the petrol tap.... Yeah, no problems, so hopefully no more problems before I'm home again.

The cathedral in Ulm closes at 17.30 and I arrive at 17.45!! I would like to see it and I'd been told that the most likely area for the Losandoni in the EC books, is the hot springs around Ulm, so I decide to find some local accommodation.

Find an "Expensive" hotel (the service is outstanding here) just outside of Ulm, the owner drives a motor cycle himself so I got a free garage to park mine in.

Very, very good food, artistically arranged on the plate. Most of the restaurant/hotel is booked by a party of middle aged couples in Jaguars, Ferraris and Porsches (not cheap), so the land lady asks me if I would mind sharing my table with a couple of German bikers and their son, fine with me, nice evening. 8xxxx Km. =>

Rise ??, wash, breakfast, pack, leave at 10.08. The cathedral in Ulm is closed because of a service and an organ concert, I don't feel like waiting for two hours, so I look at all the postcards from inside it.

Fill her up and leave Ulm, not a lot to look at before Sigmaringen, but what a change. Sigmaringen itself has an interesting castle, the tour of the castle takes 45 minutes, more than I dared to leave the luggage unobserved, so I took a look at the church instead.

The landscape is suddenly filled with mountains and very beautiful narrow roads, there's a lot of caves on my dad's map but I don't see any signs to them.

I later look at a tourist information for hikers and it includes some of them, and they are all far from the roads here with one exception. I've never seen so many motorcycles in my entire life, my left hand was hardly ever on the handlebar. 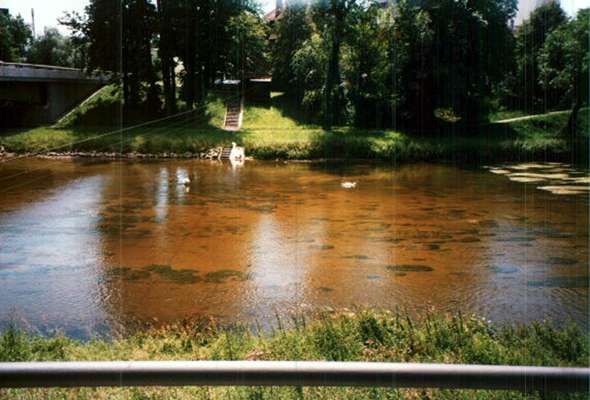 The river at Sigmaringen. I don't know if you can see it, but the left swan is standing on the bottom, not swimming. 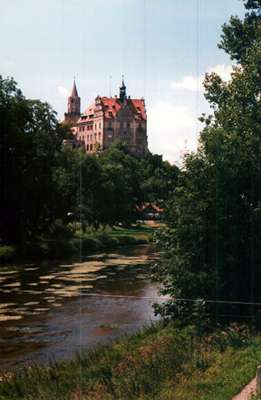 A look at the castle from the same spot. 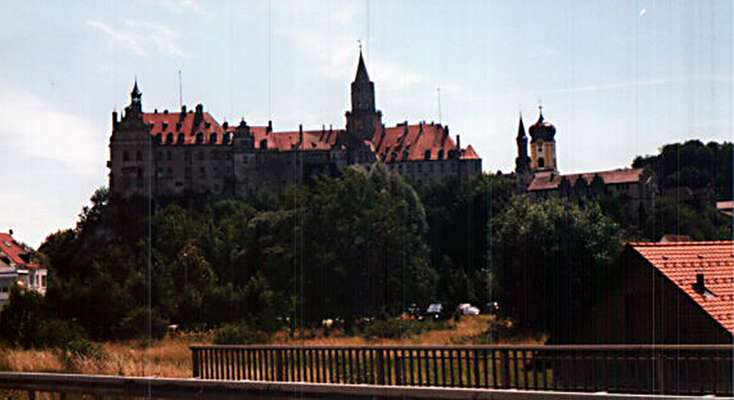 And from another angle, where you can see the church tower too. 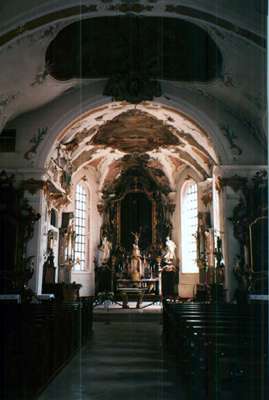 Drove into the town centre and ordered a big ice cream and something cold to drink, temperature was up to 31° in the shade. Shared the table with a German biker on a GSX-R 750 (he borrowed it from a friend, because his own classic needed repair).

I asked if there were always so many bikes on the road here and he replied that there was fewer than normal (on holiday?), but it was a very popular thing to have a bike here, since it was only a few hours ride through the Alps to the Riviera and the Mediterranean Sea.

The river is down to 2 - 3 m. and after Gelsingen no water at all, a little closer to Donaueschingen there's suddenly water again, so there must be a dam somewhere in between. I finally found a way out to the place where Donau begins, it's actually three small streams that meet here ; the Brändbach, the Breg and the "Stille Musel", took some pictures. 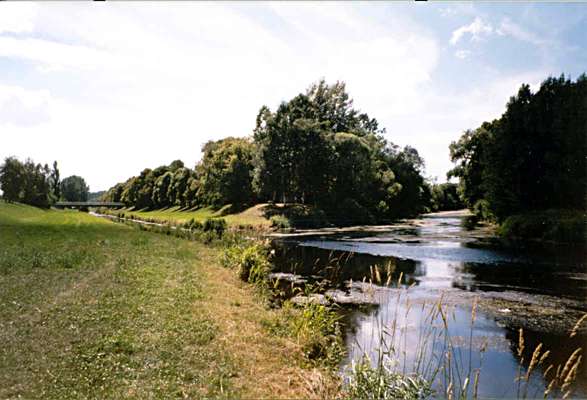 The Brändbach to the left and the Breg in the middle. 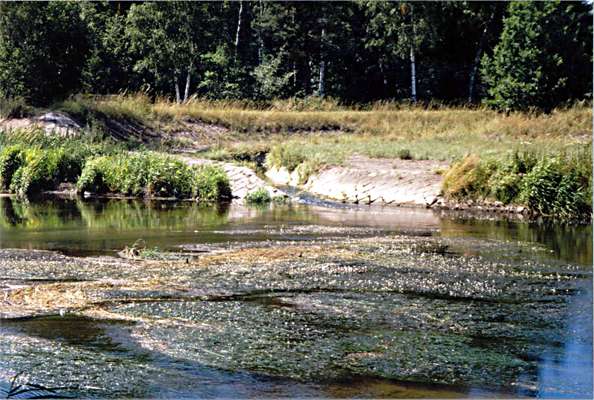 The "Stille Musel" is this small one coming in from the top of the picture. This is the place where Ayla and Jon meat Gurban and Yorga. 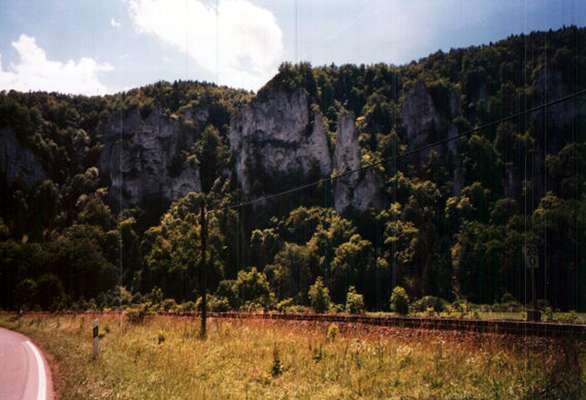 The river wasn't easy to spot for much of the way here, it runs just in front of the cliff. 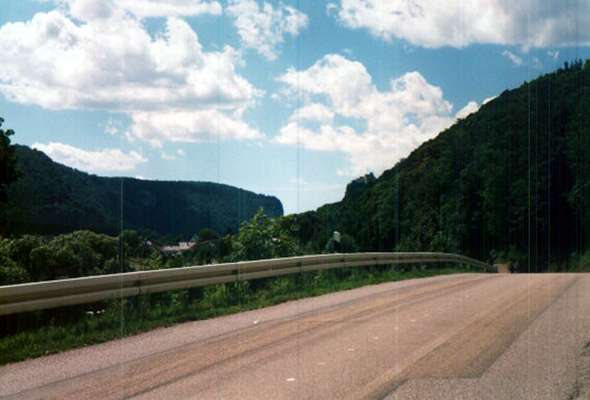 And the story continues ..... but it's a very scenic route. 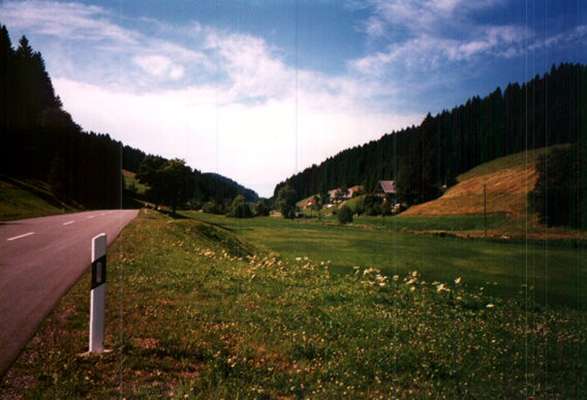 And moving towards Furtwangen. The little brook in the pic is the Breg.

I continued to Furtwangen, Martinskapelle and the Donauquelle, that's the route that Ayla and Jondolar followed in the books and "officially" (to some) the beginning of the river. 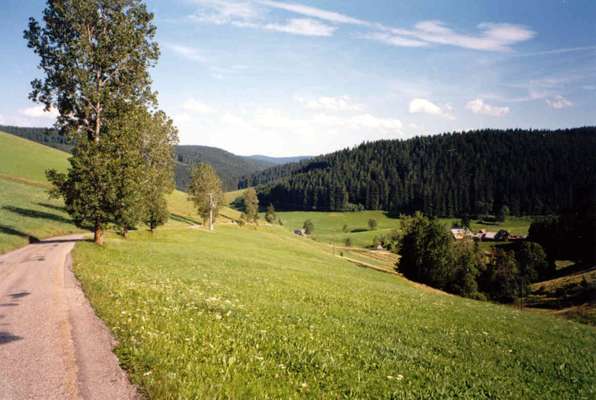 The scenery taken a few hundred metres below the source of the Donau (Breg), looking downstream. It runs in this valley.

I looked at the chapel first and luckily for me there was the explanation of the start / spring of the river: It doesn't start in one but in many tiny springs, where it seeps through the soil, so the spring that you see up here is artificially built to satisfy the tourist demand !!!! 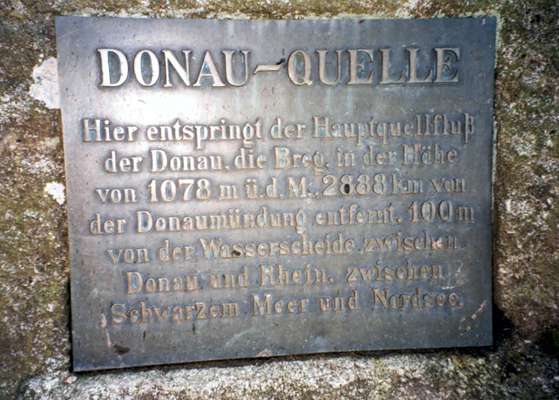 18.00; Call Carsten to wish him happy birthday, point the bike north, then east until the autobahn towards Stuttgart.

I took a gas, meal and rest break just before Würzburg, phoned mum and dad and told them that there was almost no traffic on this part of the autobahn (unusual) so I would take advantage of that fact. I completely missed the sign outside Würzburg, towards Kassel, so I ended up in Nürnberg (what a bummer), now there were a lot of trucks too, back again to Würzburg and then towards Kassel.

I can only say that I must have been tired, even though I didn't feel it (first time in Würzburg). Later in "the foothills of Kassel", I knew that I had become too tired to continue, so into the gas station in Kassel, fill her up and pay, then the few hundred metres down to the motel there, get a room, lock the bike, move luggage to room and finally to bed at 02.38.

Fuel in Hamburg and eat an ice cream. Cross the border to Denmark 1530, fill her up again, take a break and write a bit more and rest the bottom end.

Drive the last piece home, back at my place at 17.30. It's wonderful to sleep in one's own bed again.

Nothing in life ever goes completely as planned, the same can be said about this trip, it had its positive and negative surprises. My personal conclusions at the moment are :

If you would like to see the beautiful / interesting parts of the river they are in my opinion :


If you would like to see the source, go to Donauquelle and Martinskapelle, then Furtwangen, Donaueschingen where Brändbach, the Breg and the "Stille Musel" meets each other, and skip to:

Tuttlingen to Sigmaringen, Ulm, Keilheim, Passau to Bratislava, Almasneszmély (in Hungary) to Budapest.

If there's peace in the Yugoslavian Republic/Serbia; Beograd (Belgrade?), the four iron/fire gates (if peace from the Serbian side, otherwise the Rumania side), and the delta to the Black Sea.

If you would like to see Rumania now and drive yourself, then be sure that you drive a true off-road vehicle, not just a look-a-like.

I would guess/hope that the roads will improve quite a bit in the future, at least they're working on it.

Never ever drive when it's dark !

If you want to see the delta, pay what it costs to have your vehicle safely parked and take one of the tour boats there or the daily ferry from Tulsea to Sulina. Other than that, the interesting/beautiful nature is mostly in the centre/mountainous area of the country.

The Yugoslavian Republic/Serbia, well there's many reasons to hope for lasting peace there, but the places that I went wouldn't appeal to most tourists, not bad at all, but there are other places that are more interesting/scenic here.

If you would like to see it all, I would suggest that you take a boat.