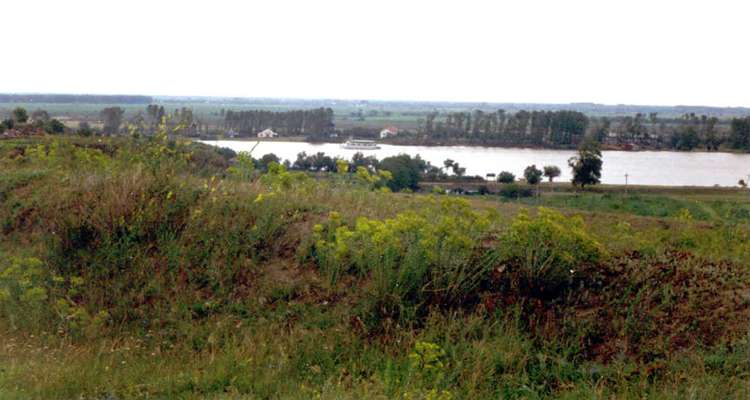 The only sane way to travel through the delta; on one of the ferries or a smaller boat. But not me ....

Rise at 9 o'clock, ready to leave at 11, it start to drizzle and I stop to put on my rain suit 5 minutes later. Can't find the right way towards Sulina, ask a couple of guys on a motorbike for the direction, they point for me to continue on the road I'm on.

The weather's getting worse and I'm beginning to have problems with the visibility ahead (fog and rain on the visor and glasses) and after 40 Km. the river is suddenly right in front of me and the road apparently ends here in a town square with houses on the other three sides.

I take the dirt road on the opposite end and drive along it looking for signs of were the main road continues to the Black Sea (acording to my map it's possible to drive all the way to Sulina). The road starts to narrow after a while so I turn right at the next intersection and right again, 50 metres before I'm back to the square again on the parallel road the rain has created a one metre deep ditch across it.

There's a path to the left of it and I take it and discover too late that this is (wet) blue clay. Slam and here we go, the engine is ticking over in idle, so; push kill switch, turn off ignition key. Rise to my feet again, well at 8 to 10 Km./h nothing much is happening, is it ?? The first thing I notice is that the left mirror is bend all the way back, well better remove the luggage and raise the bike back up to vertical. Hey where did all that oil come from ??? Dammed, then my holiday ends here........

Hmm the engine did run fine when the bike was turned laying down, I wonder how bad it is, put the gear back into neutral, ignition on, press button; no response? Oh yes, reset kill switch, try again, it sounds fine but I can't see if any new oil running out, there's already too much on the ground and I can't park it here, so I drive it back to the pavement.

It's so much easier to drive without the luggage. It didn't drip any oil on that short distance, so out with the side stand, and walk back after the luggage. Now it's possible to inspect the crash site, slippery as hell, and only one rock in the path, exactly where the engine hit the ground, Murphy hasn't lived in vain!

Of all his 45 laws, there's not one where the outcome is positive - his life must been worse than mine. Now is the time for a little change of mind, think positive (I'm trying, I'm trying); I'm in one piece (and alive), no scratches (except for the pride) and with a bit of luck and a bit of "Fingerspitzen Gefühl", then the whole package (me, bike and luggage) might make it back to the main land or if I'm very lucky come home together, by it's own power.

But frankly; I haven't got the desire to continue the rest of the way to the Black Sea under these conditions, Period. So close and yet so far. It just wasn't going to be this time, so carefully I start heading back to the main land. The rain almost ceases to fall within the next 10 minutes (like a sign that my decision was right) and the sky took a lighter colour and another of the two BT guys warnings came through: Never drive into a puddle of water, it might be a metre deep !!

The Trip up the Donau

Several of the big holes that I had avoided on the way out were now filled with water and at the worst place, the whole road was submerged. Stop completely, then first gear and partly release the clutch and forward with 1 Km./h., my memory and the caution served me correctly, it was very deep, but the suspension doesn't have any problem coping with the bumps at this speed and over we go.

The area is suitable for agriculture so long as there is reasonable drainage. 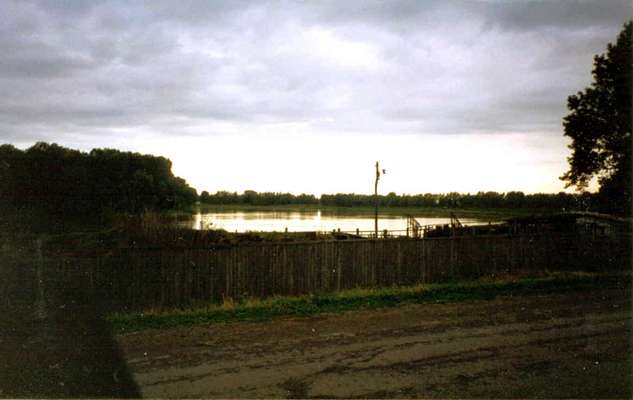 A "blind" part of the delta, and it's not evening, just wrong exposure. Note the handmade stick fence, typical of many parts of Romania. 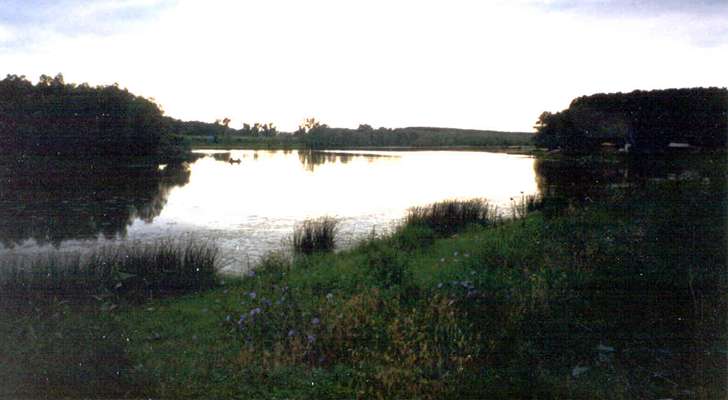 Getting closer to the mainland. 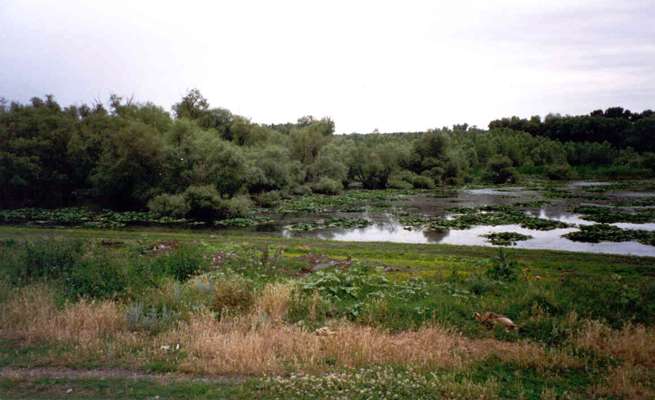 An overgrown area. The vegetation is a mixture of species depending on the local conditions. 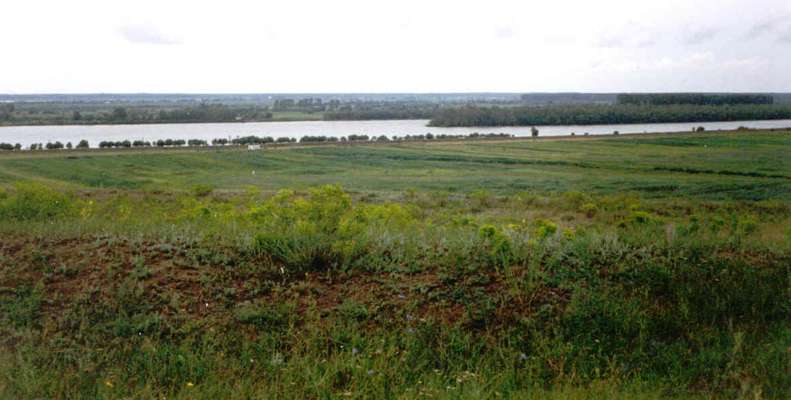 The river divides again in the delta. The horizon is not even the other side of the delta !!!

Another "small" part of the delta. It also home to the biggest population of water birds in Europe though I didn't see them.

Close to the mainland it looks solid, feels solid and maybe, just maybe it is .........

A little later I made some photo stops, no where the tank bag wouldn't be filled with water immediately. I continued to the ferry, it was on this side of the river so I drove directly on board. Two young guys on board spoke English, so we talked about my bike, one of them turned out to be the guy selling the tickets, he wanted to know how much it had cost when new.

I told him that the prices in Denmark couldn't be compared to the rest of Europe (we pay 225% tax on a new mc or car) and then told him the price in Denmark and Germany in 87. The passenger burst out that no Rumanian would ever be able to pay that kind of money, but the ticket man replied that there were two bikes of same model as mine in Brâila, although he didn't have the faintest clue about how they had bought/paid for them.

Then he asked me where I planned on staying the night (hotel) and I replied that I didn't know, (????), I would stop when I saw a nice place, and ask the price. If both where ok, I'll take it, otherwise I would ride on till the next one, and he replied that he knew that there was two different prices most places; one for locals and another for strangers (multiply the price with 4-5). That was straight talk, and confirmed some of my suspicions from several places, but I could also tell him that it didn't apply everywhere, at which he replied that I had been lucky. Continued along the planned route but didn't see any hotels for the next 150 Km. (90 miles) => I'm one day ahead of schedule. 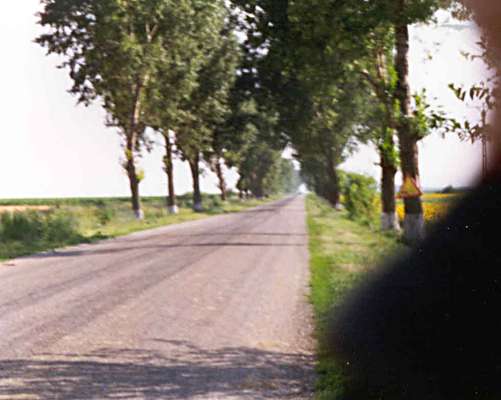 Back on the mainland again. A typical Romanian road ..... of better quality than most here!!!

Sunflowers in a huge field. These fields just go on and on for miles and sunflowers are apparently one of the most popular crops here in Romania.

I arrived in Câlârasi approx. 19.30, and I didn't feel like driving any longer that day (saddle sore), but I hadn't seen any hotel. Luckily I came across three parked Taxis and asked them, they spoke Rumanian only but the word "Hotel" is (thank god) rather international, so one of them explained the way through the one way streets (Spanish system) with sign language.

After a few minutes of driving, I wasn't sure that I still was on the right track, so I stopped to ask another bunch of Taxi drivers, they laughed and pointed upwards, big sign >>Hotel<<, talk about being blind! The young one that spoke English asked me where I was heading tomorrow, I answered, and one of the others starts to say a lot to the interpretator who's protesting a bit at first, but the other guy continues.

A little later the interpretator tells me that there's another hotel 5 Km. out of town, where there's a guard in the parking area (he uses the word bodyguard), there's a good restaurant and the guard will wash the bike for 10.000 Lei. I can only agree that it's extremely filthy but can't help wondering what's in it for him to send me out there. Decide to have a look anyway because the last two nights have being extremely noisy from the traffic on the main road below the windows, from 5 in the morning.

It turns out to be a disco, a pool hall, 2 bars and a restaurant, but that kind of establishment doesn't start early in the morning so I entered. Jesus, it's incredible how they stared at me. I don't know if it's because I'm wearing a leather suit, boots and gloves etc. or because the previously mentioned was extremely filthy, but I can assure you that Clint Eastwood never had more of the locals staring at him, when he entered a town, in any off his spaghetti westerns.

No one in the reception, but one of the locals pointed (to yet another bar) upstairs, a sweet girl (Mona) was able to speak a little English and she guided me down to the bar by the entrance and presented me for the "Landlord".

He spoke some English too, so I asked for the price, hot water and a guard for the bike. We went over to the next building to look at the room, no noise (wonderful), the water was only around body temperature, but he assured me that after a while the water would be hot (true) and every thing looked nice so I accepted.

While I was unpacking, I couldn't help get the feeling that this place was normally rented by the hour, even though nothing confirmed it, that is until 2 ½ hours later when the Policia raided the rooms. Mine is the only one where they don't knock on the door, but I can hear that they know that I'm there, because I hear one of them say something like Danese, and then other one replies; Danese plus something more, and then they leave my door and knock on the next one. Can't help wondering if the tourists are protected by the Policia, because they had also seen me doing silly things in the traffic but not one of them seemed to mind. 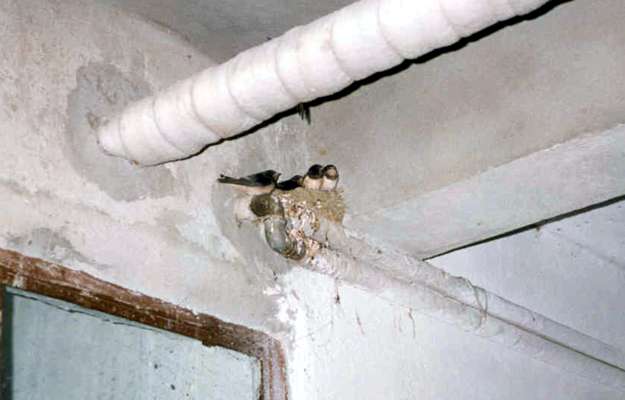 There were swallows in several places inside the hotel. These shared the garage with my bike.