Rise at 9, washed myself, poured ½ l. oil into the engine but forgot to control the level, so I can't tell if there already was a problem at that time, but the oil lamp blinked at the end of the day during hard braking, oops.

Did unfortunately also forget to disassemble and reassemble the plugs to the ignition pickups, don't know if that was the reason for my problems after Vienna (Wien), where I was "forced" to drive approx. 45 Km. on the autobahn, of which it only fired on two cylinders for 10 Km.'s. A very bad idea ; using unburned gasoline to compensate for lack of oil....

Drove only ½ hour before it started to rain, I could easily live without that, a very uneventful trip to Bratislava, good road signs, easy to continue to Brno, but I hoped to see a little of the city + some photos. Very easy to find the city centre but impossible to find an ok parking place next to the church I wanted to see, saw several interesting buildings, but couldn't navigate over to them. 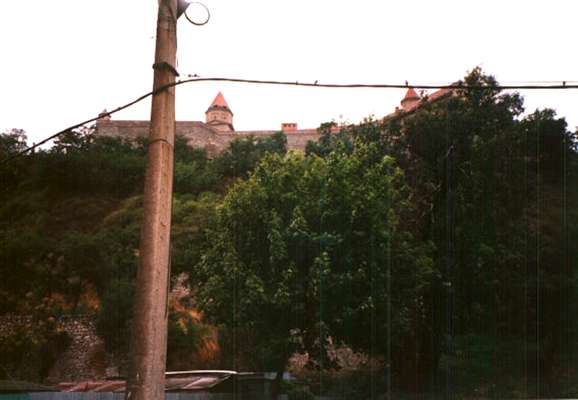 A small capital, big traffic, lots of one way streets + u turns prohibited ; I gave up, my only photo was the castle on the rock, above, where the S'Armunai people chased the horses over the edge of the cliff as a hunting technique.

Continued towards Dolní Vestonice, suddenly I'd left the Slovak Republic, a fact I discovered a few kms later, when I arrived at the Czech border.......

Changed my Hungarian Florints and Slovak Kroner to the Czech currency. I left the motorway 9 Km. later, the first thing was to get out of my rain clothes, wonderful. The whole area appears to be littered with ancient buildings (castles, churches etc.), I found the "Three Sisters" after 5 minutes, and the first sign to Dolní Vestonice 15 minutes later.

The Three Sisters, near Dolní Věstonice.

There was a big lake on the map (and in reality) that I couldn't fit into J.A.'s description/Don's map of the area, but after a few minutes of driving along it, I saw trees sticking out of the middle of the water.... So it was artificially made by a dam. One interesting church in the village, locked like a lot of the others on this trip, just too bad.

Had one litre of milk and a Mars bar as lunch (no comments, please).

The only place to get a proper picture of the "Three Sisters", (if you don't have a wide angle lens) was from the middle of the lake, so I took two, knowing that they won't fit exactly.

Somewhere up there in one (or several) of these wine fields, some of the most interesting archeological finds had been made, but for good reasons they would never put up signs for the general public on how to find them.

Drove toward Vienna, the customs took what seemed like forever. Found Zweirad Nord (mc shop) just outside the city. The shop was much bigger than any I've ever seen. I went in, asked for spare parts, and was guided to the other end of the buildings. I had no problems understanding the first few locals but when I queued up for the counter at spare parts I quickly realized that I was in trouble. The guy behind the counter spoke a very broad Wiener dialect, I only understood 10% of what he said. He could hear that I spoke a reasonable German and was therefore rather annoyed that I didn't understand him. He didn't have any engine parts for my (old) Suzuki and Suzuki Österreich's delivery time was four weeks!

He recommends that I buy a repair kit ; "liquid metal", a kind of heat tolerant epoxy, now I only need to clean the bike enough to apply it. 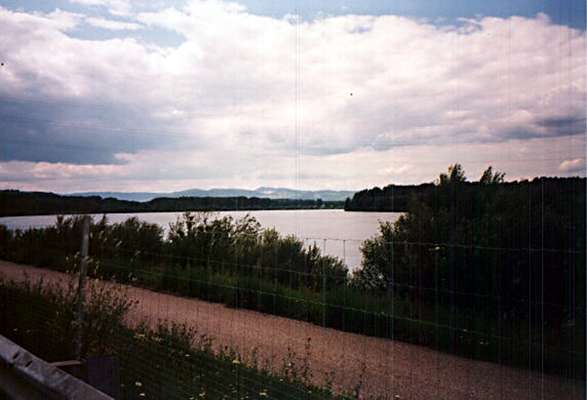 A look at the river and the surroundings just after Vienna. 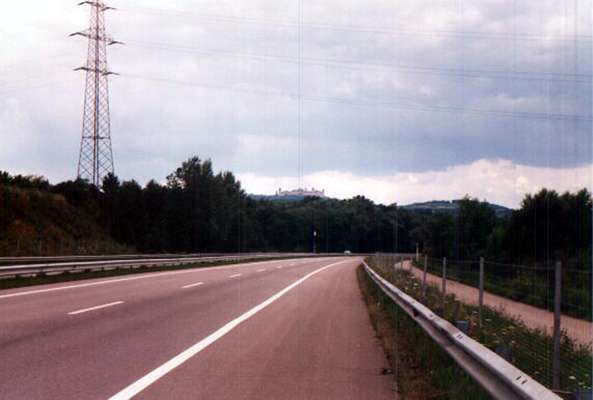 Just a little to the left of the pic above, with a castle on the hill in the distance.

In Zwentendorf, in the Austrian countryside, I found an ATM machine and a Zimmer Frei, very modern and only 220 Sch. The bike was locked into the garage. The local "Wirtshaus" (pub) served a good farm meal.


Rise at 8, breakfast at 8.41, talked with the land lady until 10.30, went down to the local supermarket and bought a dish washing brush, back, removed the lower fairing and washed the bike.

Removed the damaged engine cover, there where two cracks in it at an angle of approx. 45 degrees. The point where the cracks meet was pressed a few mm. inwards, but the land lady's late husband's vice was still in the garage, fortunately for me, so I used it with a piece of wood on each side. I couldn't press the point all the way back but it improved matters a good deal.

Then I sacrificed my nail file, to clean the area around the cracks, next to do - "mix" the "Liquid Metal". The hardener and the binder is actually already together but needs to be blended, until it has a uniform colour. The package warns against getting it on your skin, but I found that only way to get a good result was using my fingers, so I washed my hand thoroughly after applying it to the engine cover. Looks ok and I hope it lasts, please..... It appears to stay tight, but it fired ½ the cylinders for a lot of the time again today, arrgh, but one has to be grateful, that one of the problems is solved (the other had unfortunately worsened). 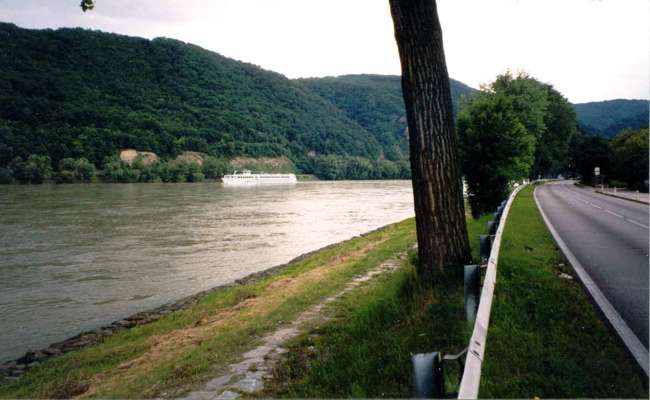 This part of Austria is extremely beautiful, the locals call it "Die Romantisier Straße" (The Romantic Road), I had absolutely no problem seeing why. Hey it's suddenly flat land again (in Austria ???), but I suppose that it ends soon. 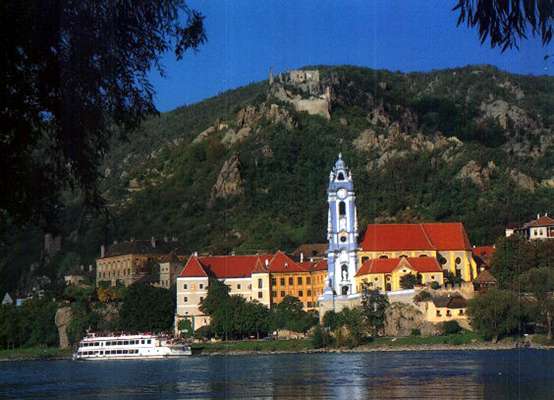 A look at Dürnstein, the Ruins in the top of the pic, is where Richard Lionheart was prisoner. Look at the bastion just above the tour boat, that's where the next picture is taken from.

Panorama of the Richard the Lionheart castle ruins, with a beautiful stretch of the Donau. 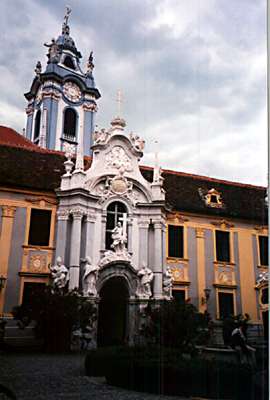 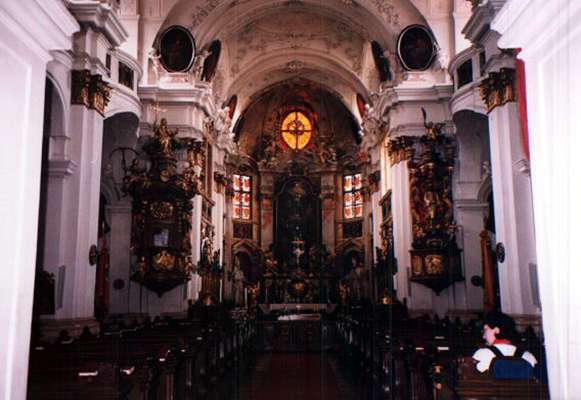 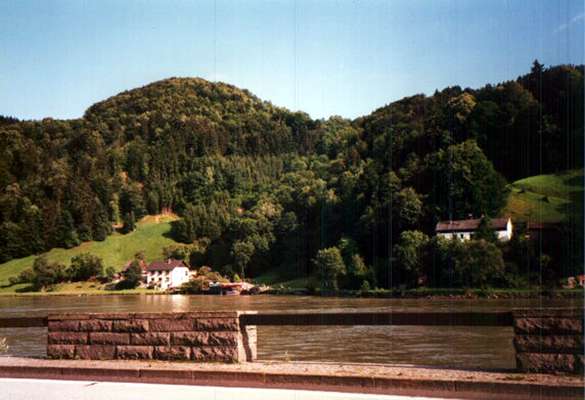 Still very much on the Romantic Road!

Linz in the background in the left part of the pic. 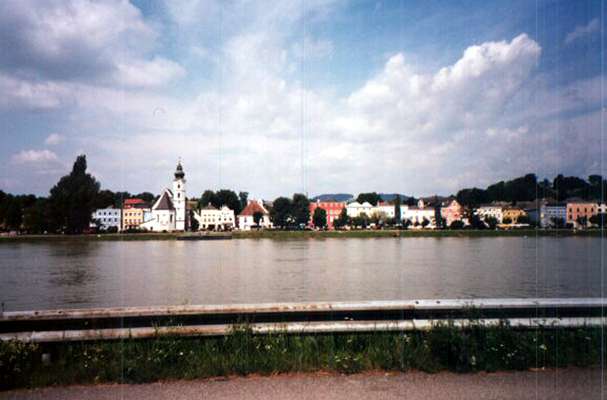 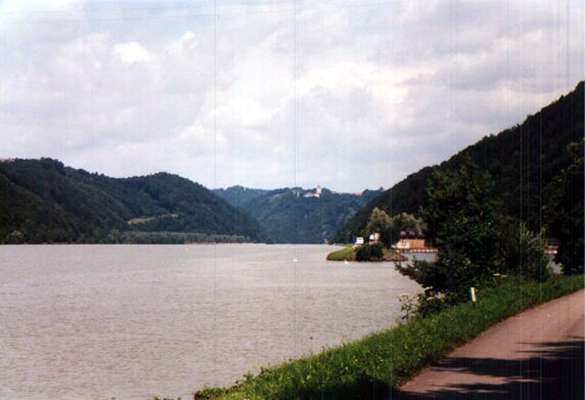 Aschach, and the start of yet another dead-end (for motorised vehicles anyway).

Find a Zimmer Frei on a luxury farm, again 220 Sch. cheap, wonder if they are very religious here; the prayer from yesterday is located on the bed stand !....!

I really hope that todays pictures turn out well, maybe I should have taken more. 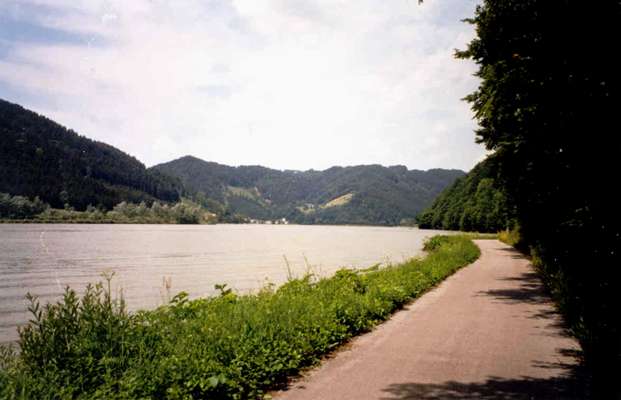 One of the most beautiful parts of the river can only be experienced on a bike (manpower) or as a hiker, too bad for me, though I was lucky enough to experience 9 Km of it (it was also the road to a camping site).

The landlady in Zwentendorf told me that it was a very popular thing to travel to Passau, leave the car there, hire a bike and ride down along the Donau (it's not always downhill) for 1 - 3 weeks, sleep in B&B's, when you want to go back just board one of the river boats back to Passau. I found a nice "Wirtshaus", where I had my lunch today, looking out over the river. Hey there's no border control here any more! Oh that's right, that part of the Schengen treaty, within the EU. 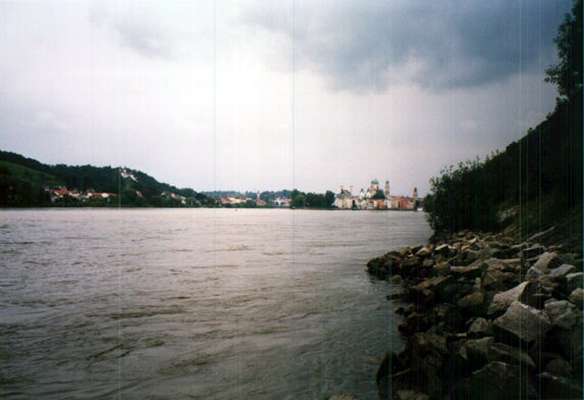 Just to the east of Passau. Here you can see the river "Inn" coming out almost in the middle of the pic and the Donau coming from the right side.

Passau is a very beautiful old city, but way too many tourists, traffic and road repair. 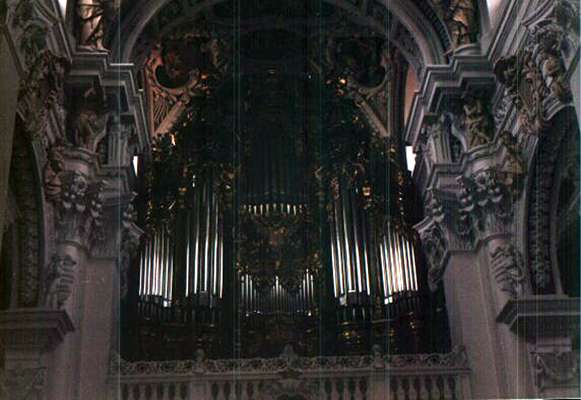 The Cathedral of Passau, the "Passauer Dom", is fantastic, and the organ is superb, but I found the claim that it has the biggest church organ in the world a bit hard to believe.

It started to rain, and I hadn't parked the bike in a good spot, so I left, tired and not very interested in anything. Rented a brand new luxury apartment in Wörth an der Donau, a few hours later for 40 Dm. Cooked dinner and went directly to bed and read a good book.