Left at 6.30 am after a really good sleep. The first part of the trip took us through forest to Amen. We had breakfast in a lovely glade near a large dairy. From there we cycled to Grolloo and then followed the trail through a large forest and towards Gasselte where we found a cafe that sold us coffee and apple pie. 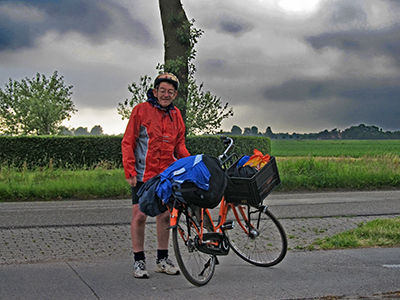 Packed up and ready to go at 0630h, with rain threatening and fairly low light conditions.

This is the raincoat I bought at Heerenveen when I left the one I had brought from Oz behind at a stop. I had not realised that the colour was significant when I bought it - when I wore it I got a lot of cheers from pedestrians in small towns, and at first I thought they were having a go at me, but then I realised that they were pleased that obvious overseas tourists, with heavily loaded bikes on a long trip, were wearing the Dutch national colours - and no doubt supporting their football team in the World Cup!

Note also our standard method of washing and drying clothes - we would do a daily wash of clothes at the evening stop, dry them as much as possible overnight, then attach them to our bikes for the final drying effort, so long as there was no rain during the day, shirt and socks in this case. You get used to putting on damp cycling shorts ('knicks') in the morning on a trip like this. They soon dry out as you cycle. 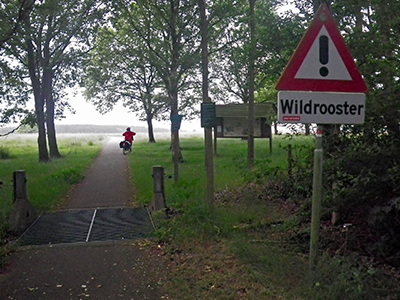 We were travelling on the minor parts of the cycleway on this section of the trip, and the 'Wildrooster' sign is the Dutch word for Cattle Grid!

The weather was grey and drizzly. 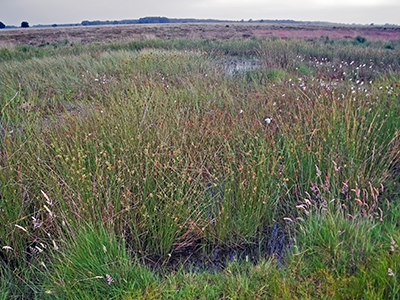 I was very impressed with the total amount of forest and wetlands in Holland. These are a wonderful asset, and give a huge boost to habitat for all kinds of birds, animals, fish and insects. 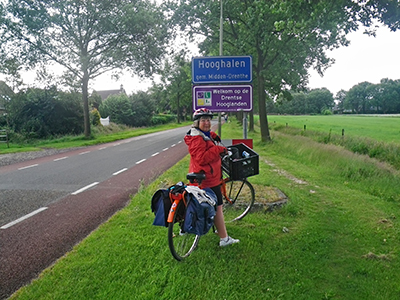 We were on the Smilderweg, just entering Hooghalen, after crossing over the A28/E232 via a bridge.

At this point there was just a single lane road for vehicles, with a cycle path on each side. Cars were going slowly enough that they could move over onto the cycleways if there were no cyclists, and pass safely. This dual use of roads is unique to Europe.

In Australia, sadly, there would be no cycleway at all, let alone in two directions, and the space would be given over to a narrow two lane road for motor vehicles only. We have our priorities wrong, but changing public opinion on this matter would be a Herculean task. 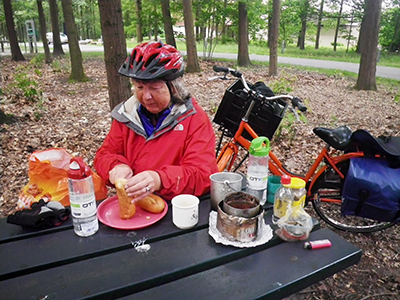 Breakfast in a beautiful glade of trees near a dairy. While Maria was cutting up the rolls, I was making Turkish coffee. I use a home made stove running on methylated spirits (spiritus, ethyl alcohol) which is very light and totally dependable. Since I had it on a wooden bench, I had put down an aluminium foil sheet to stop the bench from being damaged by the heat. Normally I would put it on the ground or a concrete surface. 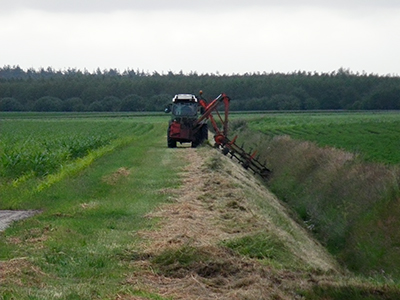 The ubiquitous ditches and canals in Holland need a great deal of maintenance, in this case with a special mowing attachment attached to a tractor. 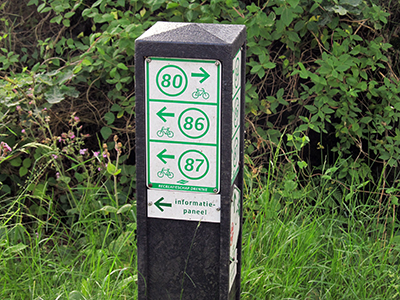 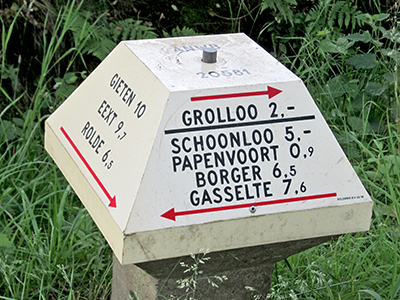 By now we were familiar with the signposting, and were navigating the cycleways fairly well. At this point we had passed Grolloo and were headed towards Gasselte. 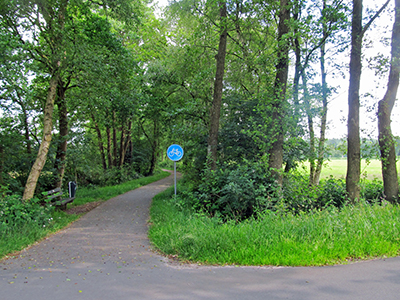 We followed the signs above, and turned into a dedicated cycle way through a wonderful forest. 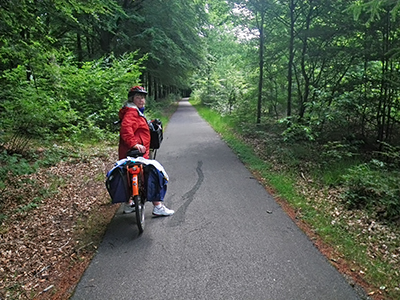 This was a beautiful part of today's journey. A well maintained track, a flat gradient, no wind or rain, and superb surroundings. 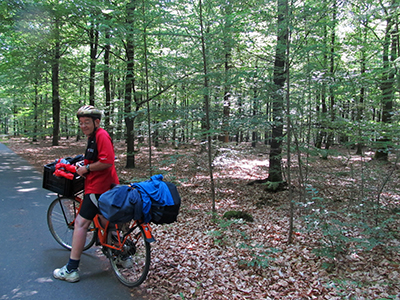 The forest became quite open, and lost the understory it had originally had at the start of the track. 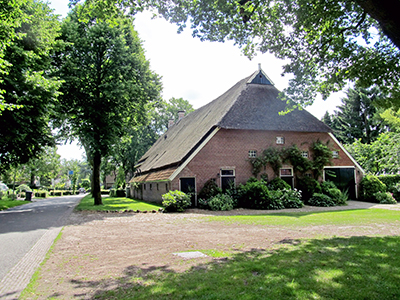 This large house on the outskirts of Gasselte had a well made thatched roof, with tiles on the lower sections. I often wondered whether these thatched roofs had tile all the way up, under the thatch. The thatch was protected by the usual small pegs and wire from the danger of fire from lightning strikes. 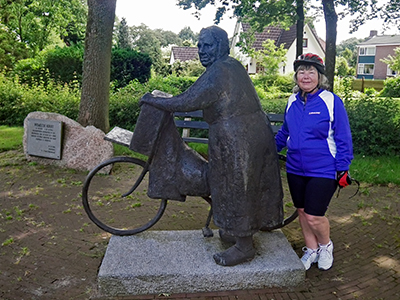 Maria beside a statue of Wemeltje Kruit in characteristic attitude with her bike, created by Bert Kiewiet.

Wemeltje made a living using her bike to ride around selling her merchandise from house to house. 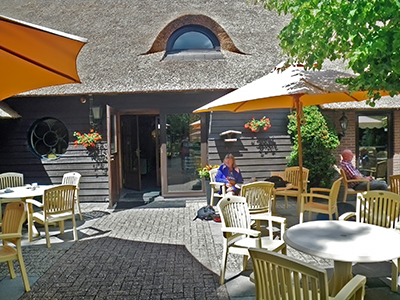 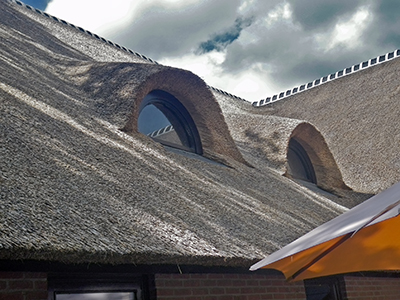 Maria at 't Maotie restaurant. We had good coffee and apple pie.

They specialised in Pannenkoeken Boerderij, farm pancakes, but we only needed a snack at that point.

The word Maotie is derived from the word meaning 'Made of Ma', which means pasture or hayfield. Due to the low lying nature of these lands they were not used for agriculture.

The thatched roof looked as though it had only just been redone, and it was a beautiful job. Once again ceramic tiles were used for the ridgeline, apparently a tradition in this part of Holland, and what looked like lead sheet had been used at the bottom of the windows to ensure weatherproofing. 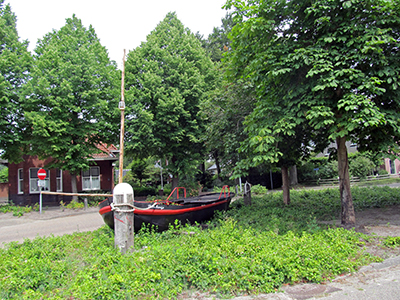 A canal boat at its final resting place - as a flower pot!

At Gasseltemijveen we had some lunch on a park bench - tuna and tomato rolls then headed towards Stadskanaal. The wind was starting to pick up now. We had bought more groceries as well so were carrying a fair load. Some of our riding took us along roads without cycle paths or past fields planted with potatoes or grains. 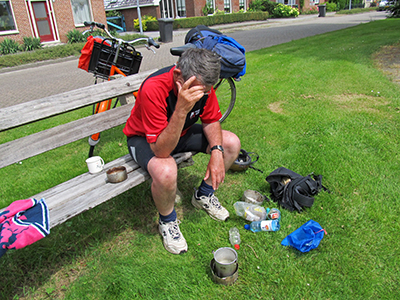 Boiling the billy for Maria's tea, with my Turkish coffee still to come. The stove, support, and wind break work really well. You get your tea and coffee a great deal faster and better than at any coffee shop!

We were about to have lunch, tuna and tomato rolls which Maria made up from her supermarket supplies, and it made a good meal. 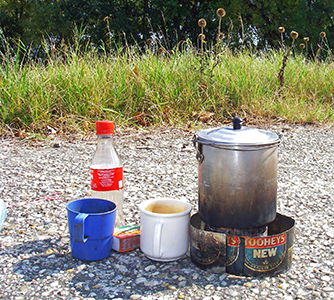 This is my setup for making tea and coffee and cooking a meal.

The blue silnylon bag you can just see the edge of on the left contains, one inside the other when not in use, the stove, support, windshield, my blue cup, a small coke bottle for methylated spirits (spiritus, alcohol), matches, the set of stoves (just the base of cut down aluminium drink cans, one inch high, one of small diameter from an energy drink, and one the standard 375 ml beer can) and the small cut down billy I use when I am making coffee just for myself.

The large billy shown here and Maria's white cup are stowed separately to the silnylon bag.

If we are both having tea, I put two cups of water in, a suitable amount of fuel, light it, put the billy on top of the support, and put the windshield from aluminium can sides (stapled together) around that.

In three or four minutes we have boiling water for tea. I blow out the stove, pour the excess fuel back in the bottle, and pack everything away.

I have cooked many meals on these stoves when we were at camp sites, on this trip, on later trips in Europe with Maria and also by myself, and on innumerable bushwalks in Australia and New Zealand for many, many years. The system works extremely well. The fuel is readily available and very cheap in Europe and elsewhere, the system is silent, economical, very light, almost no cost, easily replaceable, and since there are no jets to clog or pumps to fail, it always, always works, rain or shine. You could use, as I have for demonstration purposes, a metal egg cup, it works just as well.

When cooking a meal, I now use the metal cap from a scotch bottle as the stove, since this gives an even, low heat which cooks the meal without any danger of burning. One fill of the scotch bottle cap will boil up either a pre-prepared meal, or cook one you make from scratch, using, say, macaroni, water, onion, garlic, tuna, cheese and parmesan. The same effect of simmering using a low heat can be had by adding 25% water to the alcohol fuel with a larger stove. 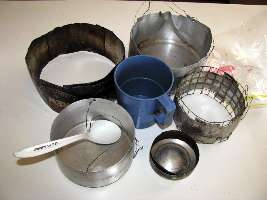 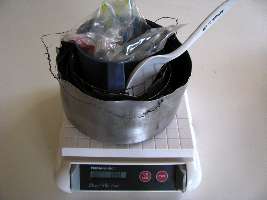 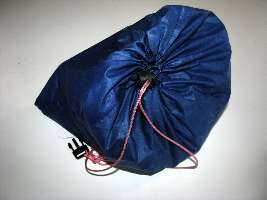 This shows the bits and pieces of the stove system spread out, packed up, and put away in a ditty bag, and without the larger billy I use when cycling with Maria.

Coffee billy in the foreground, the larger, somewhat battered meal billy towards the back. In 2020 I now use almost the same system, but with only a two inch high 'roundpod' or pot support, and without the circlet of aluminium inside the stove which acts as a 'virtual wick'. The virtual wick increases the power of the stove, but makes it hard to blow out.

The one inch gap between the top of the stove and the bottom of the pot seems to be the ideal compromise between a rapid boil and fuel economy. 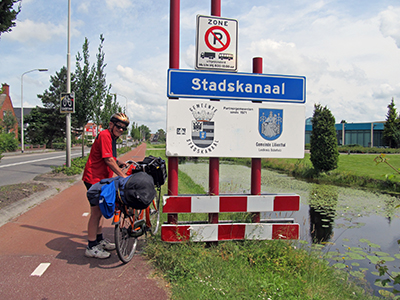 On the outskirts of Stadskanaal. 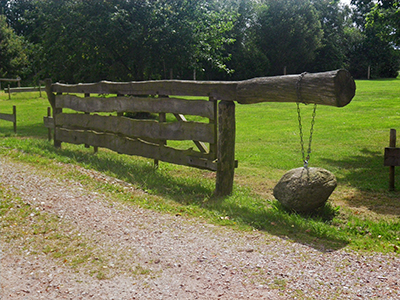 A little later we came upon this delightful large wooden gate. Hand made, it includes some squared timber for framing and diagonal bracing, but the main parts are cut from one or more big logs, using a chain saw, probably with a jig, and it has been set up with a humungous rock counterweight. The system would no doubt work very well. 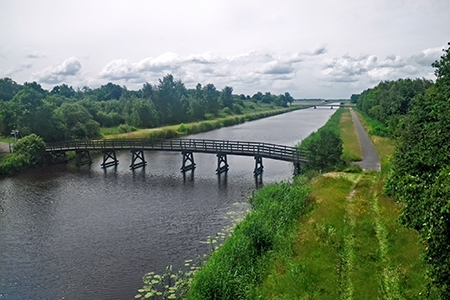 Originally proposed in 1765 to exploit peat reserves, it was completed in 1856, with a length of 38 Km. At that time it was one of the busiest shipping lanes in the Netherlands. Its construction created the towns of Stadskanaal and Musselkanaal.

After all the peat had been excavated, many agricultural products were transported on the canal, such as potatoes for the potato flour industry and straw for the straw board factories .

Due to competition from trucks and the increase in scale in inland shipping, the canal lost its significance as a waterway from the 1930s. In the 1970s there were plans to fill the canal, but an action by the local population prevented this. Nowadays you can only find recreational boats on the canal.

We crossed the main canal - not as impressive as I was expecting and continued on towards Tange where we hoped to camp. There was nothing there so we cycled a little further to Onstwedde where we got a lovely campsite protected by large hedges and with a table and benches. Don even managed to get 24 hour Wifi. Suddenly the sun came out and it became very warm again - time for a hat. We opened the Chilean Sauvignon Blanc and the Pringles. I sent the rellies an SMS to let them know where we were. It's only taken us six days to cross Holland, better than I expected. 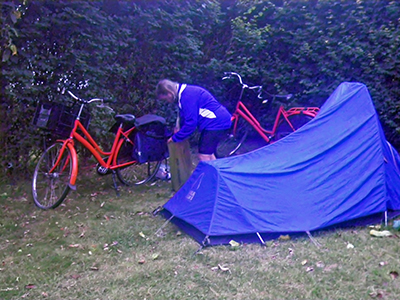 Packing up very early next morning at the very good campsite we found just past Onstwedde. We were headed for the Ems River, then eventually Brenen and Hamburg on the way to Denmark, and the German border was only 10 Km away.

Everything was going well. A good meal and wine the previous night, a restful sleep, and the prospect of a new goal, crossing into Germany, a place warm in both our hearts, since both of us have spent a fair bit of time there.