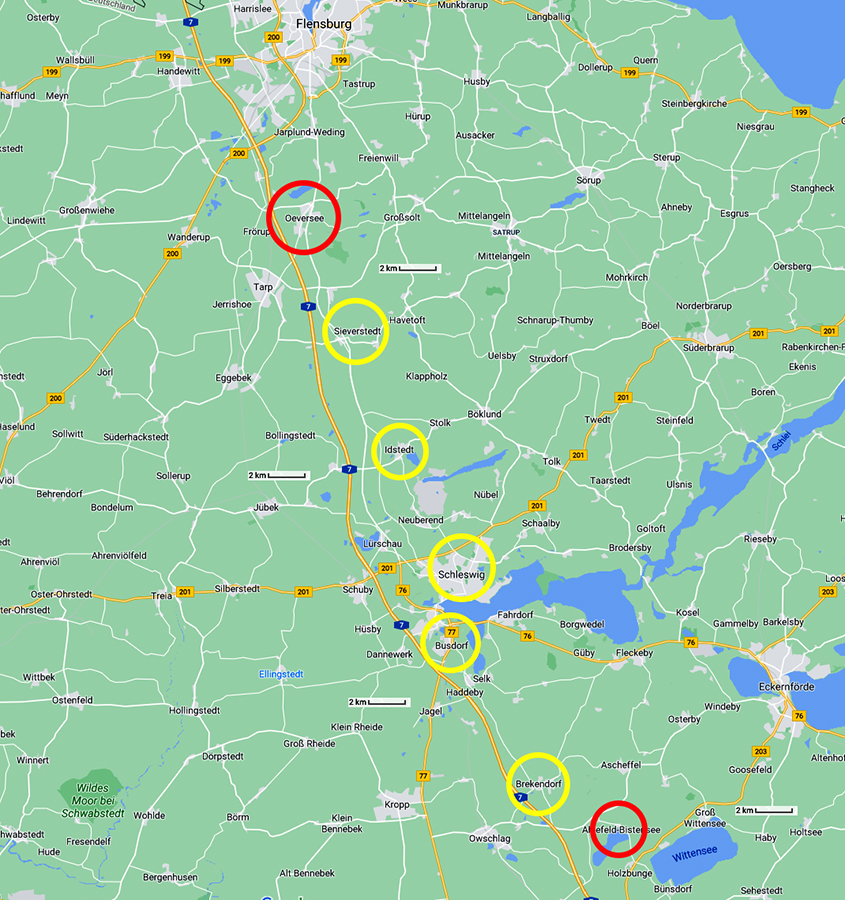 I was awakened by birdsong just after 0400h but we didn't get up until 0515h. We packed, had a cuppa, did our normal bathroom things and were on the road at 0615h. We rode through Ahlefeldt then north to Brekendorf and then followed the yellow brick road (no radweg) to Busdorf where we did some supermarket shopping and looked for a place for breakfast. We found a good place on the outskirts of Schleswig. We then mucked around looking for a way out of town. 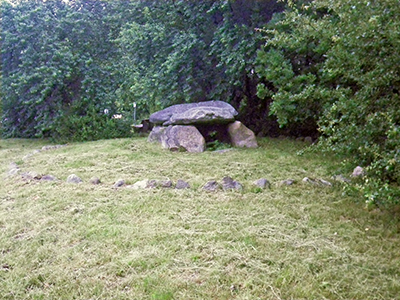 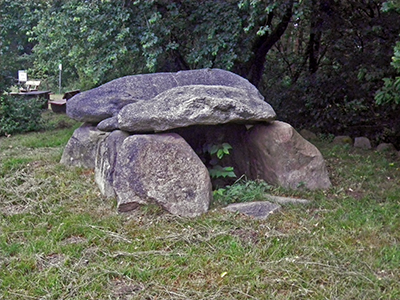 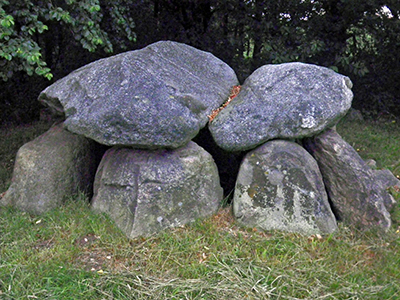 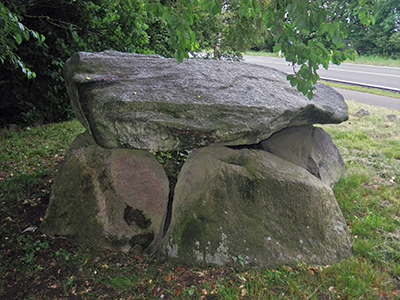 Grave 1 was originally located east of Ramsdorf (village) and 250 m west of the road leading south from Brekendorf at the level of Hof Langenberg. Since it was endangered by the construction of the A 7 , it was moved about 400 m to the southeast to the state road 265 in the 1960s. Grave 2 is located south-southeast of Ramsdorf and 1.9 km west-southwest of grave 1 in a field. The destroyed grave 3 was north-west of Ramsdorf and 960 m north-north-west of grave 2 in a field.

The complex originally had a round mound with a stone enclosure. The burial chamber is an east-west oriented extended dolmen. It consists of two pairs of wall stones on the long sides, two end stones on the western narrow side, one end stone on the southern half and a half-height entry stone on the northern half of the eastern narrow side as well as two cap stones. All stones were still in situ when Sprockhoff examined them . The western capstone has a length of 2.5 m, a width of 1.75 m and a thickness of 0.8 m. It has several bowls on its topon (?). There is also a bowl on the eastern capstone. The access on the east side of the chamber was originally closed with a stone slab that was found to the east outside the chamber. 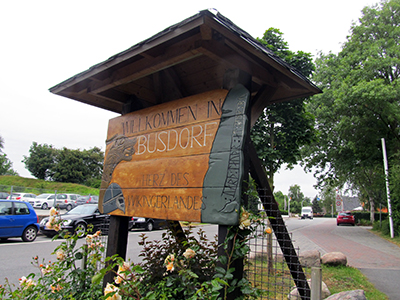 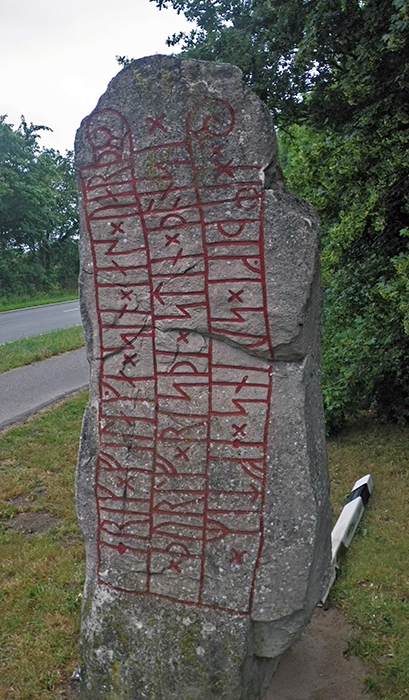 10th century, original in the Viking Museum Haithabu, found near this place in 1796.

( map legend ) Locations of the rune stones in the surroundings of Haithabu.

All four rune stones found in the area of Haithabu are memorial stones for fallen warriors who were closely connected to the 10th century Danish rulers in Haithabu.

A fifth rune stone, which dates back to about 1050, was discovered in the northern side tower of Schleswig Cathedral in 1897. Today it stands in the Archaeological State Museum, Gottorf Castle.

The Erik stone points to the followers of the king. Sven Gabelbart (ca. 987 - 1014). Sven's henchman Thorulf had this stone erected in memory of his comrade Erik, to praise his merits as a ship's captain and warrior.

A special feature are the rare runes on the back of the stone. 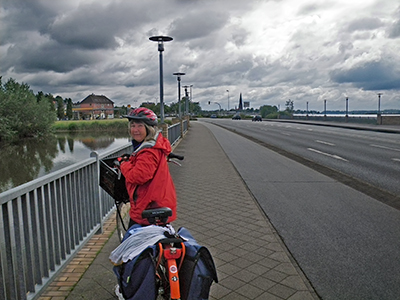 Crossing the Gottorfer Damm at the entry to Schleswig. The weather was cool and grey.

The octagonal Wikingturm residential tower seen in the upper photo was built with the waters of the lake all around it, apart from an access road, and has a total height of 90 metres spread over 29 floors. There are 241 apartments in the building. The Wikingturm was built 500 metres southeast of Gottorf Castle. There is a restaurant on the 26th floor. 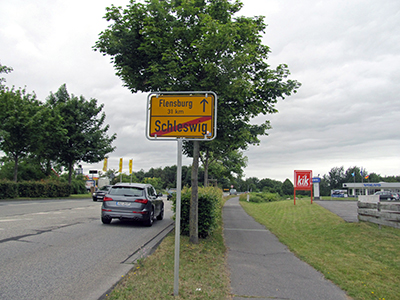 Leaving Schleswig, with the Danish border just 31 km away!

It was a long steep climb out of Schleswig, and we had to walk when near the top. The next 10 Km were pretty complicated as we couldn't take our bikes on the main road. We rode along a minor road and stopped at a bus shelter for morning tea.

It was a hard day with a lot of climbing involved because of the hilly terrain. We went through Idstedt then Poppholz on a minor road through Sieverstedt and towards Suderschmedeby. Here we again joined the yellow brick road (minor but important roads on our map, shown in yellow), (L317) and stopped at another bus shelter for lunch. We were now on a direct road to Oeversee. 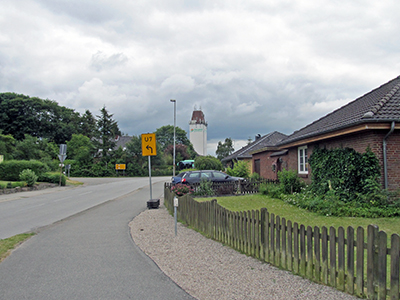 We wound in and out of very minor roads, since we could not use the main highway number 7, but we were still trying to get north to Denmark, mostly by taking whatever minor road led north by either road signs or my wrist band compass, invaluable in this situation.

This problem needs to be addressed by cycling clubs and the government.

What we needed was google maps, maps.me on an iphone, or an equivalent dedicated gps navigation device. Paper maps have grave limitations, however much purists might disagree. I love paper maps, but there is a time and a place for everything. 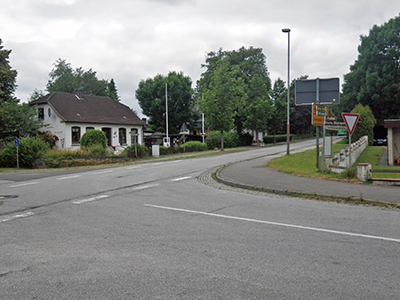 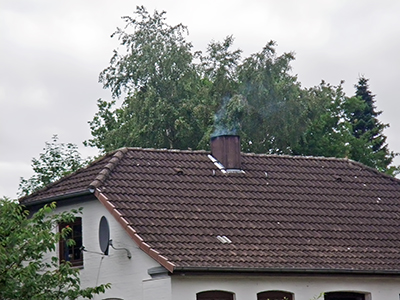 This demonstrates several things, and throws up conundrums.

First, this builder has solved the problems of a thatched roof by using tiles. Tiles last for a long time, and are impervious to lightning strikes, and to sparks from chimneys, though they lack the elegance and old world charm of thatch.

But we should also note that in full summer there is a fire burning in this house - is it for warmth (the weather was certainly cool), or is it for a wood stove perhaps?

And it throws up another question - how do thatched roofs survive having a chimney thrust through them? Thatch is eminently flammable.

It turns out that sparks from a fire are not a real factor in the ignition of thatch. The sparks are too short lived. 90% of thatch roof fires start as a result of a faulty flue or chimney.

Older chimneys were of a single layer of brick, enclosed by thatch on the outside. This is not usually a problem with open fires, where the flue gases rarely get to a high temperature. But modern wood heaters burn at a higher temperature, and this must be accounted for by either a double layer of brick in the chimney, with an air gap, and/or having the thatch well away from the chimney, with a 'moat' of something like lead or aluminium sheeting used to ensure the integrity of the roof with regard to waterproofing.

Our house does not have thatch, but we originally had an open fire. When we installed a slow combustion wood heater, we installed the metal chimney which came with the heater, so an air gap is integral to the design, and the legacy brick chimney does not get more than just warm. 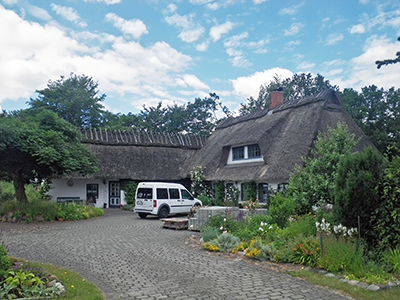 Yet another solution to the problem of the ridge on thatched roofs.

This one has all the hallmarks to me of an ancient method. What appears to have been done is that the ridge thatch has been created on the ground, lifted into place, then secured by pairs of wooden beams laid on top, secured by a wooden pin through their intersection. Obviously it works, but it is not an elegant solution to my eyes.

I suspect that the ridge problem is like the diet problem - if there were a method that works, everyone would use it. When there are still multiple ridge thatch solutions, and multiple miracle diets, you can be sure that the one that works perfectly has yet to be invented.

Both of us were pretty tired by this time so we decided to look for a Gasthaus or something similar at Oeversee. I made an enquiry at a five star hotel - cheapest room was €129 No thanks! It had royal assent - enough said! Further down the road we came across another small hotel - they had a room free for €59. Much better. Both of us collapsed for the evening. As did the bed Don gingerly lay down on, he said it looked dodgy from the start.

It turned out to be a Fawlty Towers clone, with a German Manuel, running everything on the cheap, from the disintegrating beds to the wifi, for which his laptop computer had to be switched on and set up!