We slept in today - got up at 6 am instead of 5 am. Actually we were quite happy to leave Detern behind us and cycled in the misty rain through Apen and to Westerstede where we bought a corkscrew and a top for me to sleep in. From there we took a wrong turn and ended up cycling in a bit of a circle to Linswege. 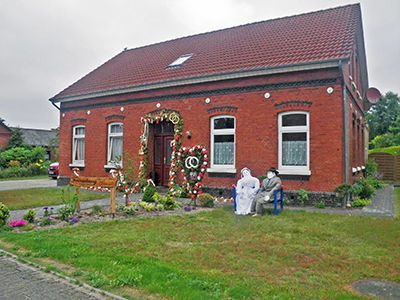 The Germans often announce important family events such as the birth of a baby with displays in the front garden of the house.

In this case it looked as though a wedding was planned or had taken place. 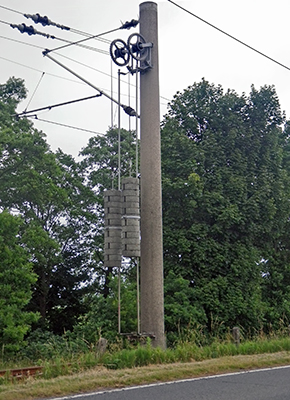 Wheel tensioner with tension weights on an overhead line mast, for an electrified train system, apparently an end or terminating post, a free standing anchor mast, unguyed. This method of keeping electrical cables tight is quite common in Germany, and allows a constant tension even when the cables expand and contract with temperature variations. A 2:1 ratio seems to have been used, rather than the more normal 3:1, a solution which does necessitate heavier weights, but less vertical movement of the weights needs to be allowed for. Often the weights are of cast iron, but these appear to be of concrete, and are rotated by 180° with respect to the discs above and below. Each of the discs probably has bumps and hollows on their upper and lower surfaces to interlock with the discs above and below, to avoid slippage and seat firmly. 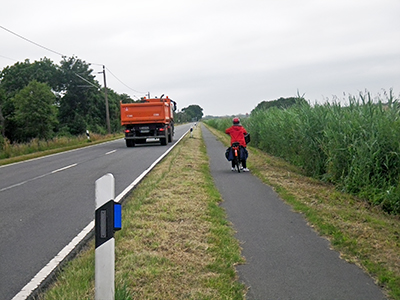 Nearly all the roads in rural Germany have cycle lanes like this one. Because they follow the roads, the radwegs benefit from all the work put into flattening hills and valleys for the roads, and there is minimal wandering about, meaning that it is possible to maintain a higher average speed on a cycle. 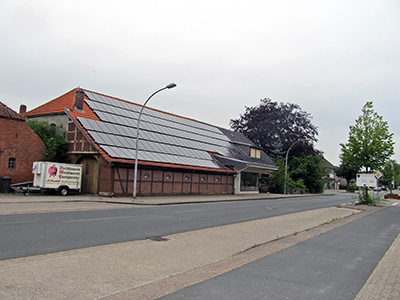 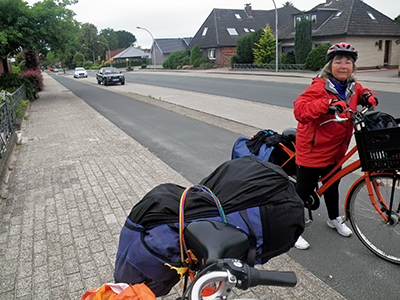 In Germany, they think things through for the better use of public space, and all users benefit. 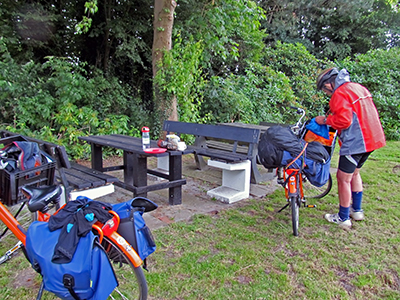 We found this well appointed table and chairs beside the road, and had coffee and a snack. 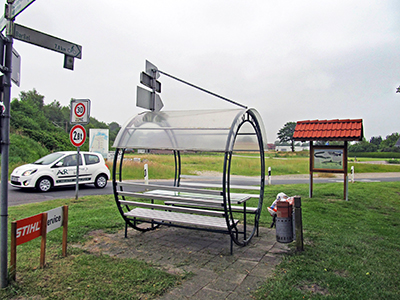 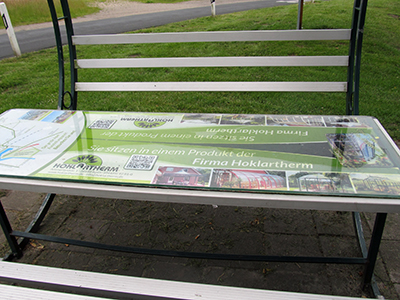 Passing through Apen we came across this well constructed shelter with table and benches. It may have been donated by the garden furniture company who have an advertisement on the table, as shown. 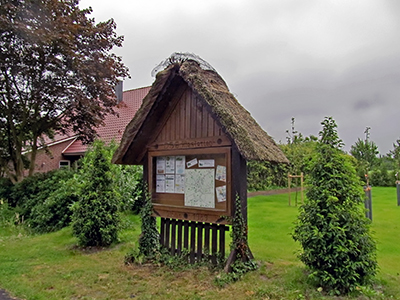 This signboard was at Westerloy on the way to Westerstede. The signboard was protected by a thatch cover, which was in need of repair after 25 years out in the weather. 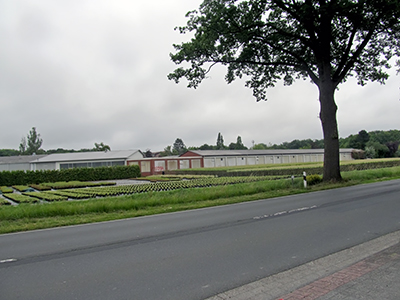 On the outskirts of Westerstede there were a number of plant nurseries, both wholesale (as this one seemed to be) and retail.

It turned cold and miserable, and Don realised we wouldn't make Nordenham on the Wesser today where there is a hostel (we were trying to avoid passing through large cities such as Bremen). We continued on to Spohle where we had a coffee and cake at the Dairy while waiting for the hotel to open. We got a fantastic room for €60 so unloaded our gear and put the bicycles away in one of the garages. The shower was fantastic. We played cards and drank our bottle of Spanish wine. Don has finally come around to the idea of buying beer rather than wine. We went down to the restaurant at around 6.00 pm. Pork medallions with mushrooms and a huge baked potato smothered in sour cream. It was fabulous, but the best bit was that I had to throw the dice for our discount. We got 15% off the meal but we then rounded it up to €30 for the two of us (including three beers). A real bargain. Settled in for the night - Don with wifi, me with the world cup. 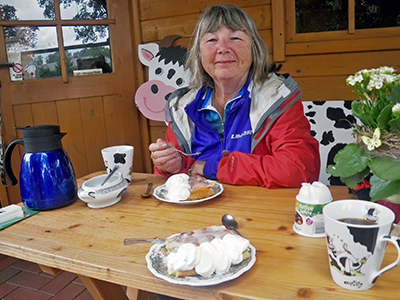 Since the Spohle hotel we wanted to stay at was not due to open for guests until 1400h, we took the opportunity to have some delicious coffee and cake at the dairy cafe. 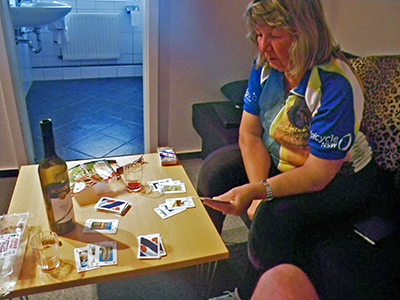 Maria and I regularly play a card game we call '30' taught to us by Delia and Philipp, wonderful German relatives of ours. The dealer deals out 11 cards to the other player, and ten to themselves. The object is initially to put down cards to a total of 30 or more, starting with the non-dealer. After that you can put down any run of three such as ten-jack-queen of the same suit, or a group of three of the same value such as three sevens, and you can add cards to your own laydowns, and that of the other player. The hand is won when one player has no cards left. After the first player tries to put down thirty, they then put a card on the rejects pile. This top card is available to the other player to pick up if they wish, or they draw a card from the pile of undistributed cards. Jokers are wild, court cards and aces are worth ten, and other cards whatever they are marked as.

The winner is determined by the player with the lowest score at the end of ten hands, which typically takes a little less than an hour. It is best played with only two players.

I now realise that this pack of cards bought in Holland has the insignia of the Sportclub Heerenveen, a major football club. 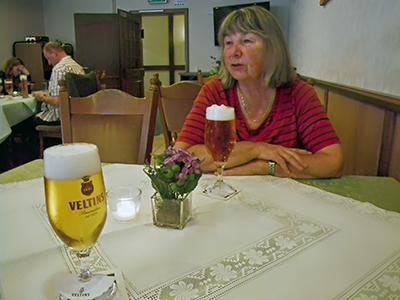 The first beer is always the best! 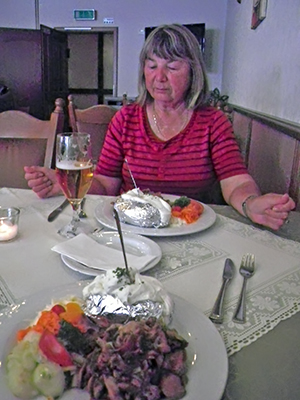 It was a great meal. 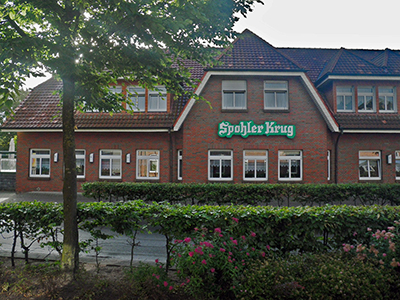 This was the rather grand hotel we stayed in. Krug is one of the German words for a beer mug. In English we use the term Stein, which did originally mean a beer mug in some regional parts of Germany, but it is no longer used there.