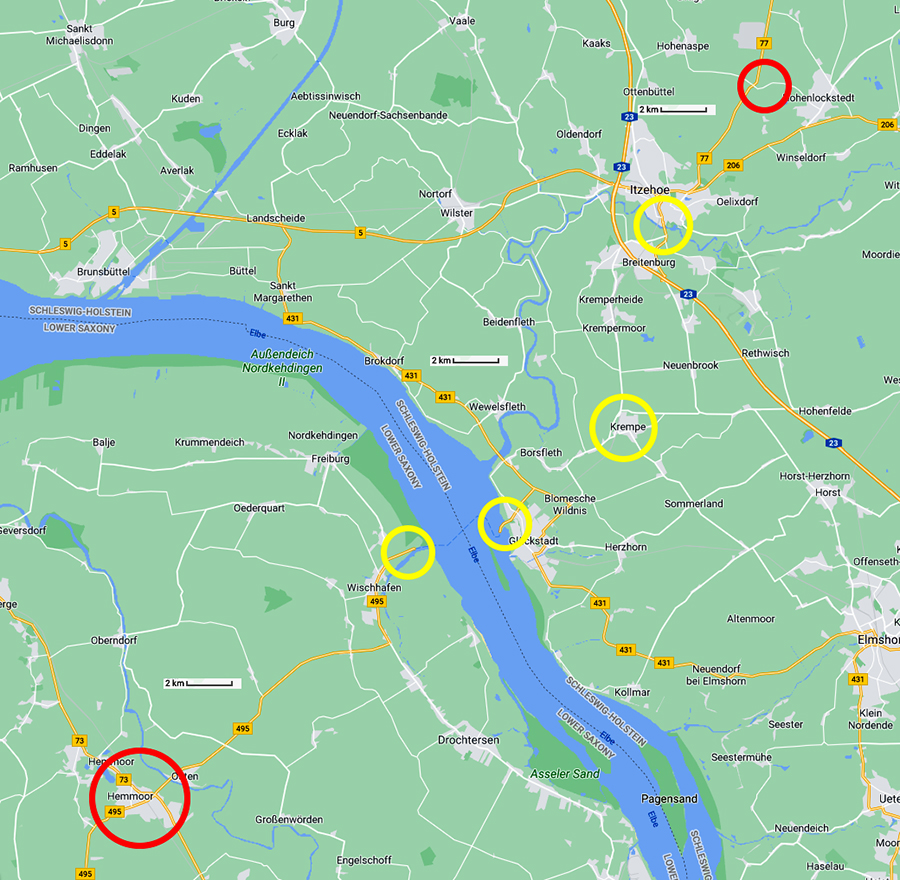 Sunday 22nd June - We had a quick breakfast at the hotel and left Hemmoor at 7.30 am. We had a great run to the ferry at Wischhafen, 20 km away. 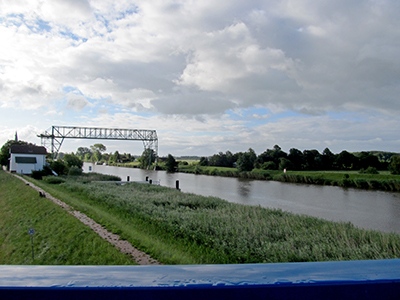 We took Highway 495, and crossed the Oste, which had an elevated structure on the left of the road bridge, to allow boats to pass beneath it, possibly originally for a gas pipeline or similar, but apparently now not in use. 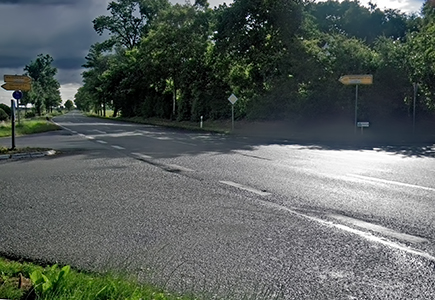 We arrived not long after at the junction which lead to Oberndorf on the left and Großenwörden on the right. We continued straight ahead towards Wischhafen, nine kilometres away.

The signs also indicated that the Elbefähre, the ferry over the Elbe, was ahead. 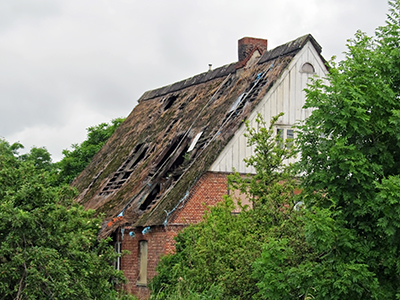 This is a most unusual sight in Germany. The main structure of the house seemed sound, but the thatched roof and its rafters were falling in, and the house was obviously abandoned.

At the Wischhafen ferry we met a group of local cyclists going across to lunch. They allowed us to be part of their weekend ticket so we only paid €6. 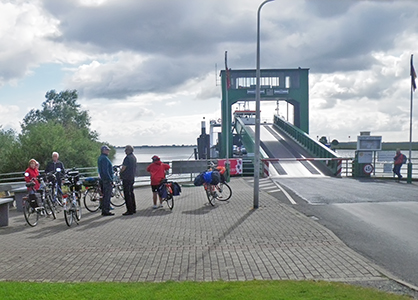 We had to wait a little while for the ferry, which took us from Wischhafen, across the Elbe, to Glückstadt, a distance of about four kilometres. 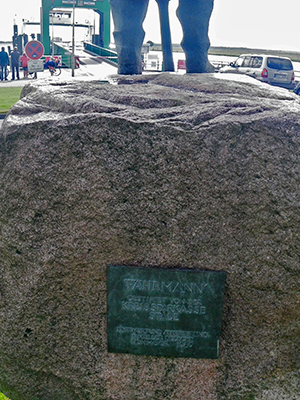 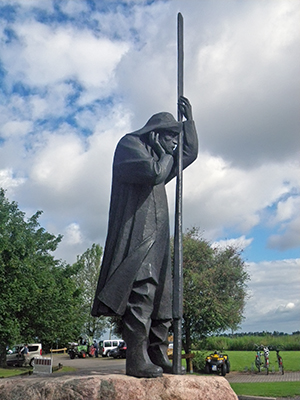 This bronze sculpture of a Ferryman is by Frijo Müller-Belecke, Hemmoor 1989, and stands near the Elbe ferry at Wischhafen. 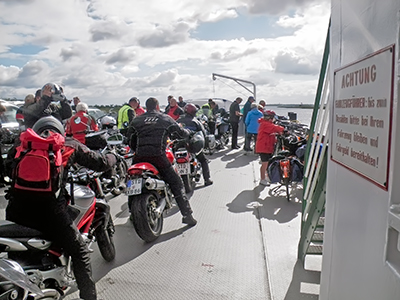 A few minutes later the ferry arrived, and we boarded. The ferry carried, as well as cars and bicycles, a group of motor cyclists on this trip. 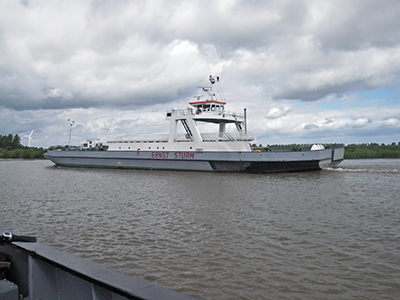 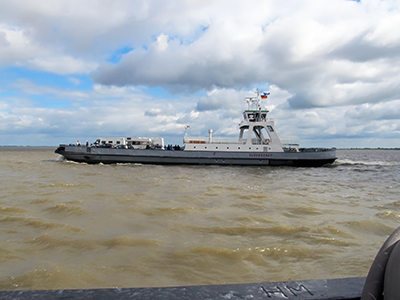 There were a number of ferries on the route. We were crossing the border from Lower Saxony to Schleswig-Holstein, the northernmost district of Germany, which borders Denmark.

After crossing on the ferry to Glückstadt we then cycled against the wind for ages through small villages - nothing open - to Krempe - a medieval town with some amazing buildings then towards the big interchange and back towards Itzehoe. 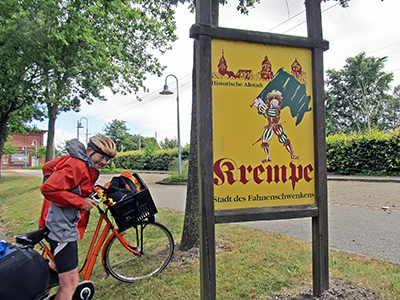 Fahnenschwenkens, or flag waving, is an ancient sport or skill in this area. The flag, with a heavy handle, is thrown in the air and caught again. 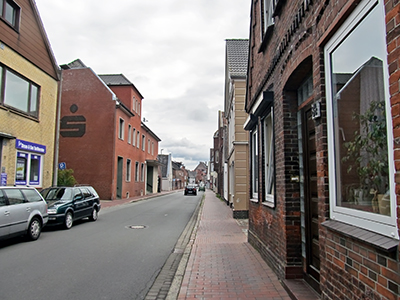 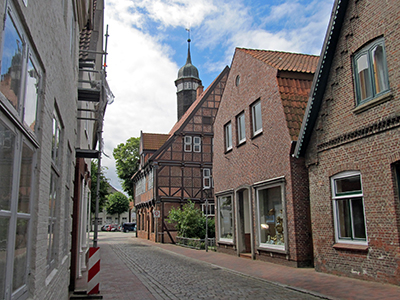 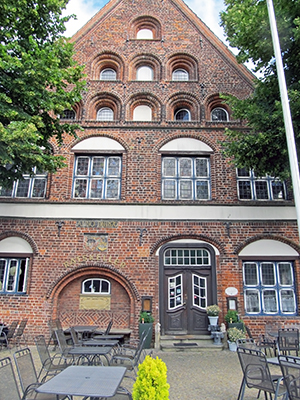 Images from the town of Krempe.

The historic town hall of Krempe is located in the centre of the smallest town in Holstein in the Steinburg district. Its richly structured south side is oriented towards the market square as the front side, the back towards the formerly navigable Kremper Au, which is now piped. The town hall is one of the most important secular buildings of the brick renaissance in Schleswig-Holstein and bears witness to the economic heyday of Krempe in the 15th and 16th centuries.

The town hall was built in 1570 on the market square of the fortress town in an economically prosperous period. It is a two-story brick building with an almost square floor plan, which was originally decorated with a stepped gable in front of a high, black clapboard roof. The representative front side of the building was completely of brick, facing the market. Here was the entrance to the Ratskeller, for which the city council had the privilege to serve Hamburg beer and wine. Access to the ground floor and the upper floors was through the still existing door on the east side of the building. The rear hall and the attic served as storage space for the town's traders and could be loaded and unloaded via the gate facing the Kremper Au.

In 1784 the building was refurbished, and the stepped gable was removed and the roof covered with red tiles and crowned with an octagonal roof turret. The lower part of the shaft is clad with shingles and the upper part has a windows all around. The dome is covered with copper. On the market side, the previous access to the Ratskeller was bricked up and an entrance to the ground floor was added in place of the left window of the city treasury. It uses the original curved baroque door.

In 1908/09 the town hall was reconstructed. The ground floor, the Ratskeller, is still devoted to a fine restaurant, now serving Greek and other Mediterranean food. 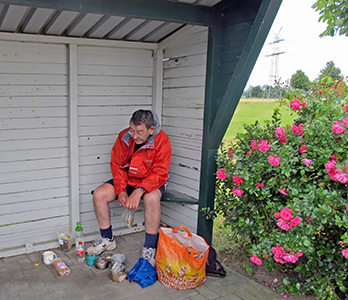 Morning tea, time for some coffee and biscuits.

It looks like I am sad in this photo, but I was perfectly happy, just getting out the necessary equipment and supplies to make hot coffee for me, and tea for Maria.

I found that the ubiquitous bus shelters (Germans do everything well!) were perfect for this - they were sheltered from wind, sun, and rain, and had seats. They were always available for our use, we never came across one which had people waiting for a bus!

We were now seeing Flensburg (the town at the border to Denmark) signs. At a lunch stop north of Itzehoe a beggar suggested we cross the border at Flensburg for the most direct way to Copenhagen.

We had a long uphill run (and walk) out of the Itzehoe valley and the most amazing downhill run on the other side. 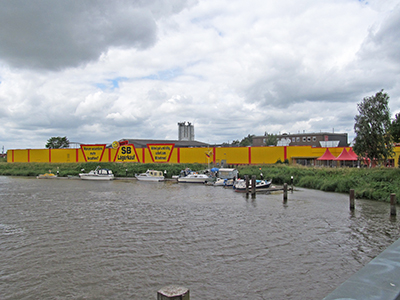 Entering Itzehoe on highway 77, crossing a bridge over the Stör, with a tejo's SB Lagerkauf (furniture store) in view across the water. 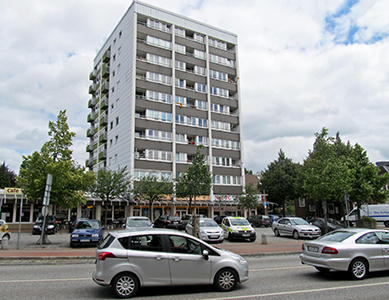 An apartment building in Itzehoe, with a strip of small shops servicing the residents and passersby.

By now it was mid afternoon - time to look for accommodation. We were a couple of kilometres west of Hohenlockstedt by this time, on Hungriger Wolf Strasse, not far from the airport, on the way to Rendsburg. I asked an elderly couple on bikes and they suggested a Ferienwohnung (vacation apartment) called Quade.

We cycled on for 200 - 300 metres - turned right and entered a big yard. Here we were greeted by the owner. Yes we could have the apartment for the night for €50. A bargain! We settled in to a lovely homely apartment that had everything - such luxury! Played cards, watched football, drank scotch and coke and checked out the Denmark map. The end is nearer. 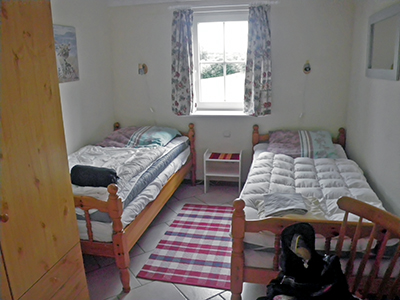 As is common in Europe, there were twin beds, rather than the obligatory double bed in Australian hotels and motels. 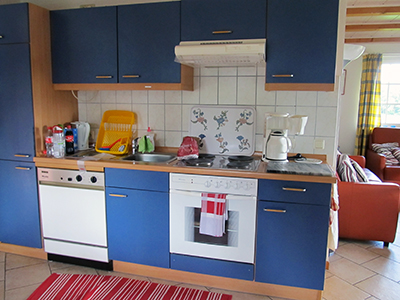 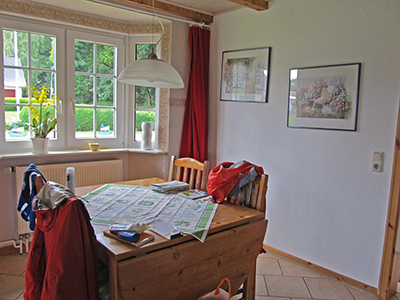 The kitchen was a delight to use. We felt spoiled, and the table was large and ideal for our use. 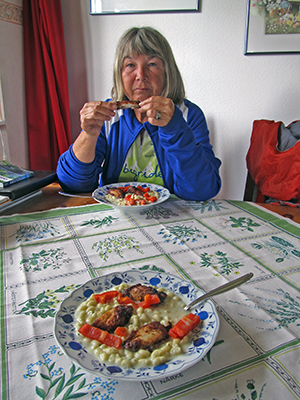 A good meal cooked in the kitchen at the end of the day. 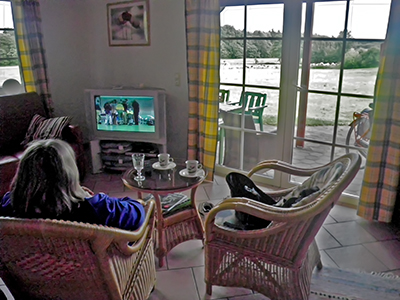 Relaxing in front of the tv.