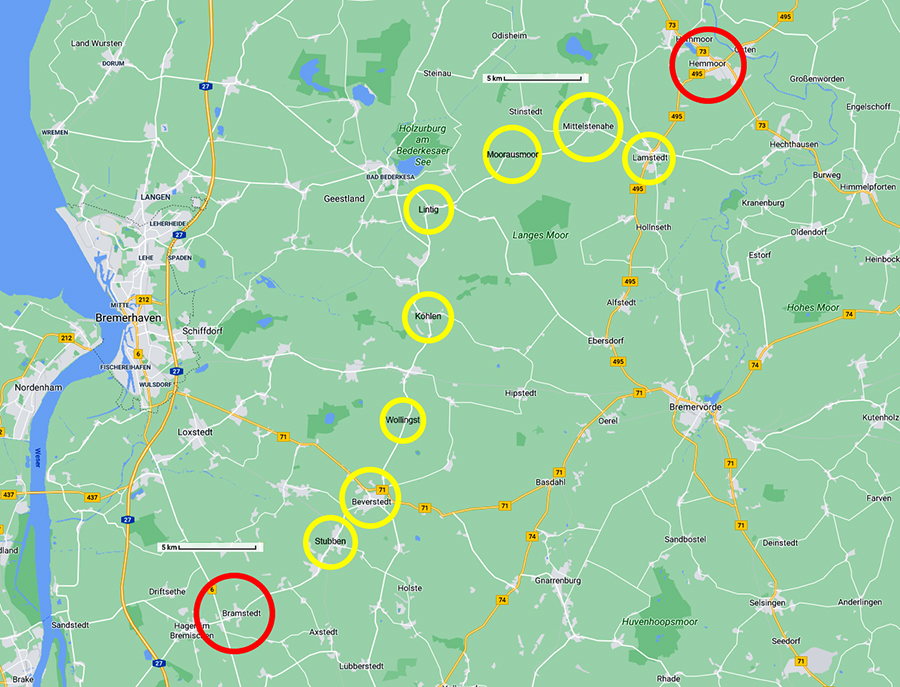 We had a big day today - after the hotel breakfast we followed the yellow brick road (minor roads that had cycleways, coloured in yellow on our large map of Northern Germany and Denmark) north east through Bokel, crossed the railway, and at Stubben, a small village just before Beverstedt, we spoke to a chemist (Kondor Apotheke) who gave Don a football garland in German colours and some shower gel, then on to Beverstedt (Beavertown). Lots of statues of beavers in this district. We had to backtrack and go through the centre of town to find the right road which led across the highway and towards Wollingst. 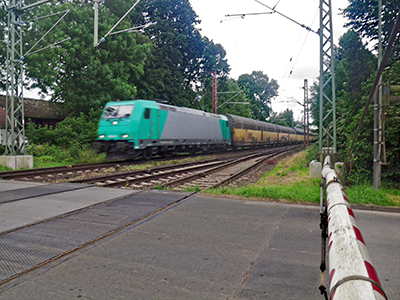 A freight train came flying past as we waited to cross the railway line on the outskirts of Stubben. 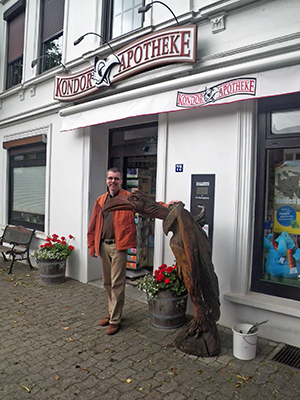 The proprietor of the Kondor Apotheke, Ingo Schmonsees, a pleasure to meet. We went into the pharmacy in Stubben to get a few things, and he made us very welcome. A fine bloke with a good sense of humour. 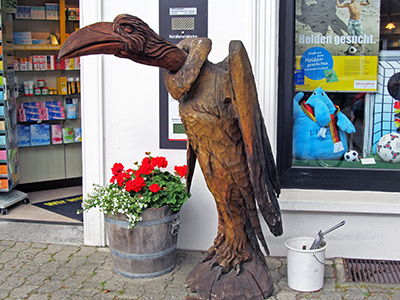 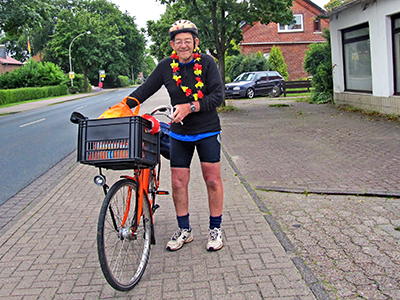 Kondor Apotheke has a terrific wooden sculpture of a Condor, and the proprietor gave me a great German colours lei to wear! 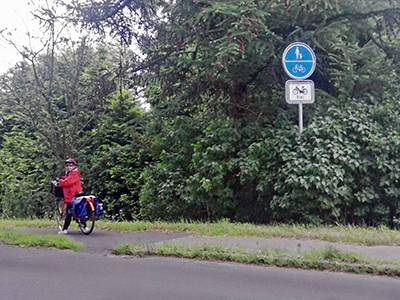 The nature of the radwegs we were using changed often. In this case we were travelling on a dedicated radweg, but it was also used by pedestrians and mopeds. 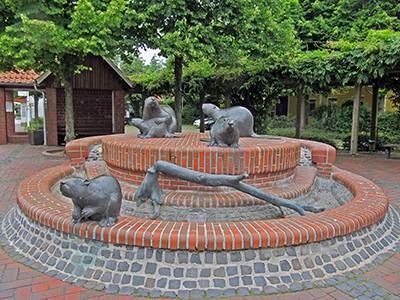 We then headed for Köhlen where we had morning tea. Near Ringstedt we headed off on a shortcut to Lintig. Despite the yellow brick road we found ourselves travelling on the side of the road with some very fast traffic - a bit hairy. 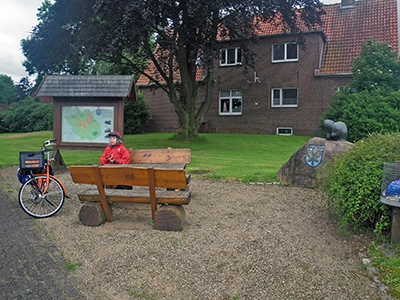 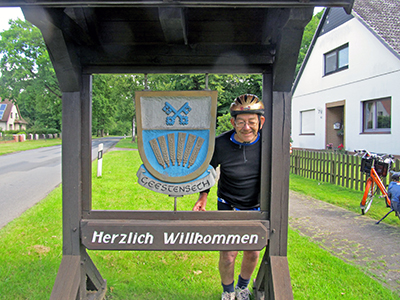 The design of the municipal coat of arms of Geestenseth comes from the heraldist and coat of arms painter Albert de Badrihaye , who designed around 80 coats of arms in the district of Cuxhaven.

The formal description is:

Coat of arms of Geiestereth: Blazon : 'Under a silver shield head coveredwith two blue crossed keys in blue, six golden ears of corn arranged in a fan shape .' Justification for the coat of arms: The keys are borrowed from the coat of arms of the Bremen cathedral chapter , to which Archbishop Friedrich donated the tithe in 'Gestensethe' around 1120. The six ears of corn remind us that around 1500 the village consisted of six farms.

Geestenseth is a small village 10 km north of Beverstedt on a crossroads. 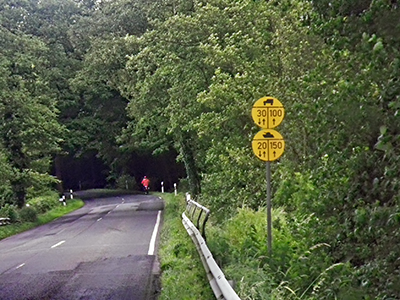 Entering a road through a dark forest, preceded by a small bridge. I am not sure why there should be so many tanks on the road that you need special signs for them. These signs are saying that vehicles of class 100, or approximately 100 short tons (circa 90 tonnes in metric measure) or less can travel across the bridge if there is no other traffic, but if two vehicles are to pass, each must be no more than 30 short tons, or 27 tonnes.

Note that the calculation of the class of vehicle or tank (and thus the number on the sign) is more complicated than how heavy it is, but the above is close enough for most purposes. 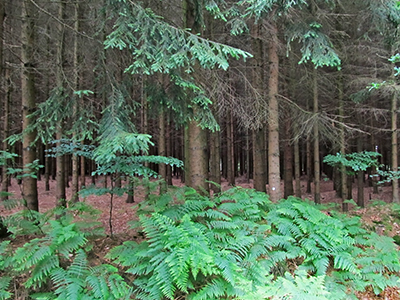 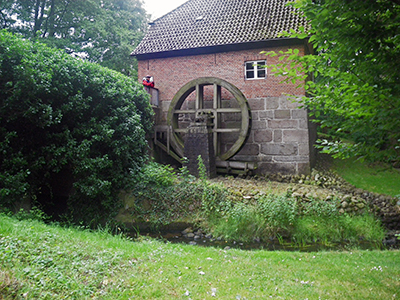 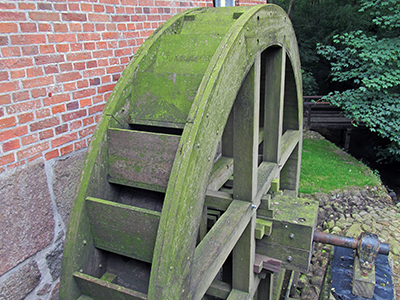 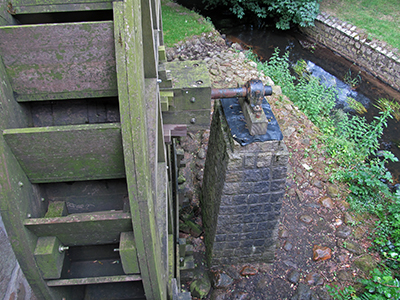 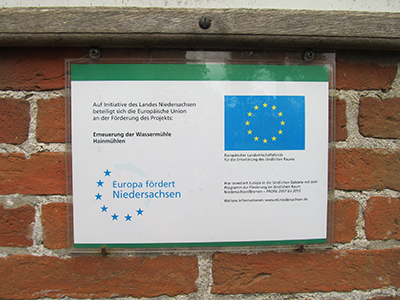 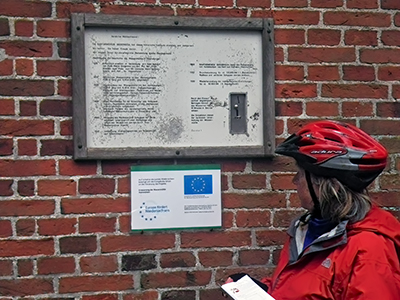 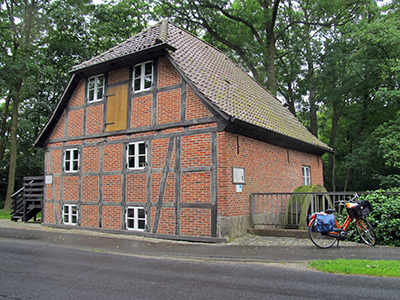 The mill was built in 1829 at its current location in its present form. It is a middle-sized mill; the water hits the wheel at the level of the axle. This shaft is connected to a shaft which transmits the rotation to the comb wheels, which releases the power to the grinding gears. The mill, which originally received its water from the Wittgeeste, has been since the middle of the 20th century only in operation with an electric motor for grinding. The foundation of the mill is made of mighty stone dating back to the 16th century. In 1980, the joint venture Bad Bederkesa acquired the mill, restored it and established it as a museum mill. The mill technology is observable and fully functional. When you insert a coin the water wheel turns. Visits are possible. 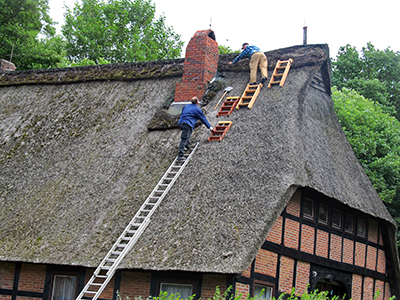 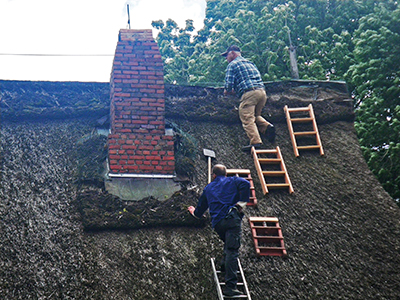 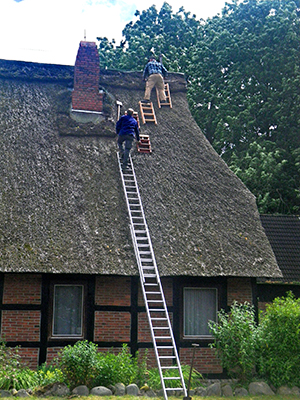 Thatching in progress. They appeared to be surveying the ridge thatching preparatory to repair or replacement, this part of a thatched roof needs to be of high quality thatch, and must be repaired or replaced more often than the rest of the thatching.

No doubt these are professional thatchers with vast experience, doing a superb job - but Australian Occupational Health and Safety officers would have pink kittens with the casual disregard for safety exhibited here!

There should be a safety harness for each of the thatchers. The thatchers are a long way above the ground, and the slope of the roof is very steep. As for the 'hanging ladders' with spikes jammed into the thatch - they are traditional, they are very useful, they have been properly aligned on the slope of the roof, they have been used for centuries, but..... 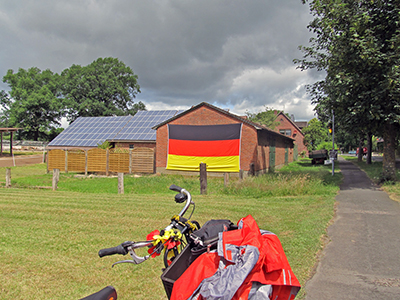 Germany was in World Cup fever, and the national flag and colours were everywhere. 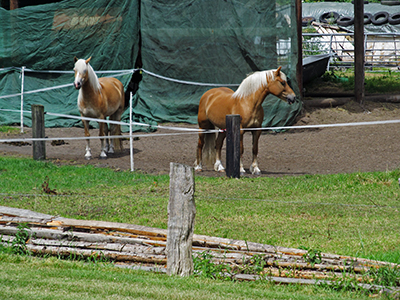 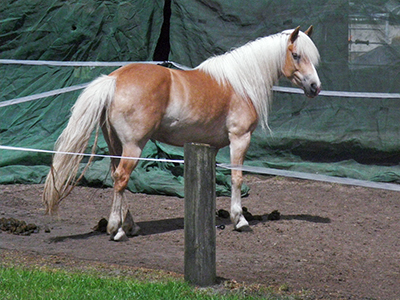 Some beautiful horses, in immaculate condition.

Northern Germany is mostly very flat because of the older ice sheets that covered it circa 300 000 - 130 000 years ago, and the loess blown from the edges of the most recent glaciation, north of this area, which reached its maximum extent 20 000 years ago. The loess deposits have had the effect of creating high quality soils for crops and grazing.

We had lunch at Lintig then moved on to Moorausmoor and then Mittelstehnahe and Lamstedt where we did some shopping and then looked for a place to stay.

Unfortunately this is a holiday town with lots of private rooms. Everything was booked out. Frustrated, we decided to push on to Hemmoor which is a much larger town. We were lucky. The hotel had a group cancellation and had rooms available. I was so happy to move in and put my feet up. We had done quite a few kilometres today. Don would have camped in the nearby forest - not me! He can be a hero! Went out to the Greek restaurant for a meal. 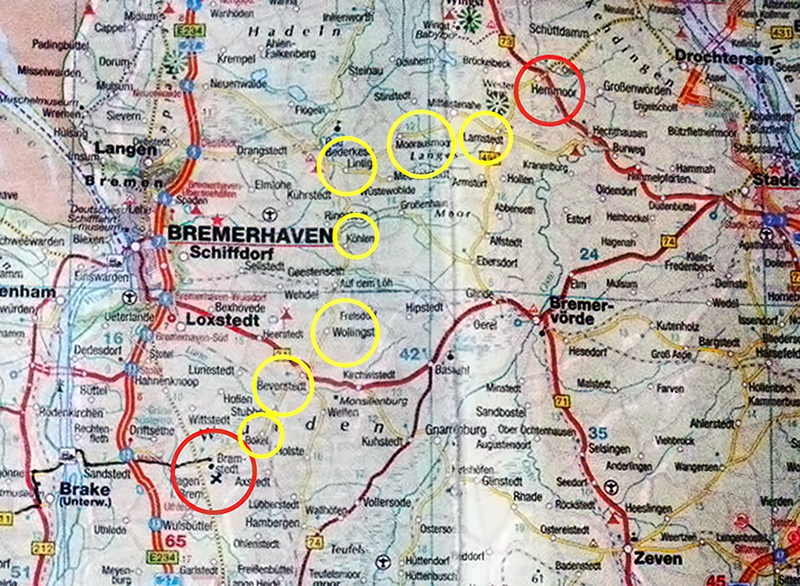 We avoided the major highways, which in any case do not usually have provision for cyclists. In addition, the minor roads are far more interesting, and you pass through smaller towns and villages where you can both get supplies and find a camping spot or a hotel for the night.